You have reached the cached page for https://www.rottentomatoes.com/m/1017321_red_dawn
Below is a snapshot of the Web page as it appeared on 1/21/2021 (the last time our crawler visited it). This is the version of the page that was used for ranking your search results. The page may have changed since we last cached it. To see what might have changed (without the highlights), go to the current page.
You searched for: Red Dawn movie We have highlighted matching words that appear in the page below.
Bing is not responsible for the content of this page.
Red Dawn (1984) - Rotten Tomatoes
Home
Top Box Office
Tickets & Showtimes
DVD & Streaming
TV
News 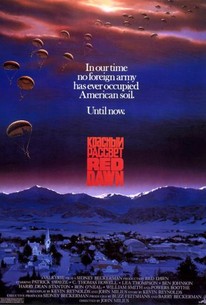 An appealing ensemble of young stars will have some audiences rooting for the Wolverines, but Red Dawn's self-seriousness can never conceal the silliness of its alarmist concept.

In an alternate 1980s, the United States stands alone as communism grows stronger. When Soviet soldiers invade a small Colorado town, brothers Jed (Patrick Swayze) and Matt Eckert (Charlie Sheen) escape with friends to the forest. With their father, Tom (Harry Dean Stanton), a prisoner of the invading army, the children decide to fight against the Soviets. As the country comes under increasing attack, the group teams up with Lt. Col. Andrew Tanner (Powers Boothe) to take back their town.