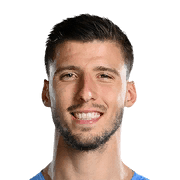 His real-life stats are currently 0 goals and 0 assists in 7 matches in domestic competition. He also received 0 yellow cards and 0 red cards.

When I heard that strong defenders were as good as pacy defenders this fifa, I knew I had to go for my boi dias as a city fan. Oh my fkn god what a legend. He plays like he's a second goalkeeper just block after block like in real life. Every time he goes in for a standing or slide tackle he not only wins the ball but knocks the attacker out of his path creating a counter attack immediately. Along side Skriniar, who is more aggresive and can press, Dias sits back and waits for the attacker to come to him and because of his impeccable positioning, never gets caught out for his low pace.

We have decided to add comments to facilitate communication and interaction between FUTBIN users. We believe and hope that we can build a stable community in FUTBIN and that comments will be a part of it. We have created a guideline, which will help you to understand how to use our comments system.

Violation of the above rules can lead to account closure.