You have reached the cached page for https://sleepinvestor.com/purple-mattress-lawsuit/
Below is a snapshot of the Web page as it appeared on 7/6/2020 (the last time our crawler visited it). This is the version of the page that was used for ranking your search results. The page may have changed since we last cached it. To see what might have changed (without the highlights), go to the current page.
You searched for: Purple Mattress We have highlighted matching words that appear in the page below.
Bing is not responsible for the content of this page.
Purple Mattress Lawsuit: Was the Powder Toxic (w/Purple Commentaries)

✔️ Takeaway: Honest Mattress Reviews made claims against Purple . They claim the purple powder they used was harmful. However, it turned out Ghostbed was partially behind this. The powder has since been found to be harmless.

Everything started 2 years ago in 2016, when the site Honest Mattress Reviews started attacking Purple with claims that their mattress contains harmful powders: namely anti-tack powder, that allegedly caused irreversible harm to the body (claims were found untrue).

How much does the Purple mattress cost?

Well, it turned out that the attack was coordinated by Mark Werner, CEO of GhostBed and Ryan Monahan, owner of Honest Mattress Reviews. The attack was made as an attempt to increase Ghostbed sales. (You can read my Ghostbed Review here)

Of course, Purple couldn’t let these claims go unanswered and started replying. I won’t write down the entire timeline, as Purple did their perfectly well on their own website.

Here’s the timeline (how Purple saw it)

Communications begin between Werner and Monahan.

Monahan and Werner begin correspondence about the attack on Purple.

Purple began seeing powder comments and reached out to Werner to Ask Ghostbed to stop making claims. The comments cease and they temporarily stop.

A new Marketing Director is hired for Ghostbed, but she reports internally to Monahan.

Powder comments resume, but this time from the Honest Mattress Reviews website. Monahan begins a daily attack on Purple, including video’s, posts (including from fake accounts) and filed complaints.

Purple decides to pursue legal options to stop the cotinuation of false information being published by Ghostbed via HMR.

Werner and Monahan file false declarations with the Court denying their business relationship.

Court finds evidence that shows Monahans company, Social Media Sharks, i s being paid $10,000 a month by Ghostbed through a company called Achieve. This has totaled almost $150,000 in payments since September 2016. The court feels not all invoices have been reported, meaning that the number could be higher.

Honorable Judge Bee Denson rants Purple a Preliminary injuction, finding Monahan and Werner were not honest with the Court of with consumers and that they purposefully created and shared false and misleading information about the Purple mattress.

Who is Ryan Monahan?

Ryan has been into internet marketing for a long time - he started in the early 2000s and created a company that focused on search engine optimization shortly after Google started.

He started Honest mattress reviews in 2016. This site is part of a larger network of sites that provide (apparently) non-biased reviews to customers.

Instead of working through affiliate commissions (which makes many online mattress sites unreliable - they simply sell the mattress with the highest commission), his philosophy is that the only way a review site can stay neutral is by using ads (Google Adsense for example).

This is a good approach, since it gives customers a non-biased viewpoint. However, it seems that something went wrong with this strategy when Ghostbed contacted him.

You can follow him here on Twitter (although he doesn't seem to be active anymore after the 19th of November 2016). His company account from Social Media Sharks is still active.

How safe is the Purple Polyethylene powder?

Purple does use powder in their mattress. But this is down to compress the mattress into the cylinder packaging. So it's necessary to deliver the mattress to you. The powder is actually patented, in order that no other company can use this technology. (Purple recently filed their 103rd patent)

A good question to discuss in this Purple mattress lawsuit article is how safe the powder is. As you've seen before, the main claim from Monahan was that the polyethylene powder used in the Purple mattress was hazardous.

Science, however, has debunked this. See what's stated here by Savannah, the head of communications from Purple in this Reddit thread:

Polyethylene is the most common form of plastic produced in the world and is found virtually everywhere in the U.S.” -“Polyethylene powder is used in cosmetic products such as mascara, eyeliner, lipstick, eye shadows, face powders, and foundations.” -“The measured particle levels detected are hundreds of times lower than health-protective standards established by the U.S. EPA...even [for] sensitive individuals. -“Average daily breathing zone exposure levels to consumers is expected to decrease over time.” -“Respirable polyethylene … particles that reach deep lung will not be absorbed and distributed around the body.” -“Likely exposures of inhaled polyethylene co-polymer would be considered safe with a significant margin of safety.” -“This analysis provides high confidence that adverse health effects will not occur in any consumers from inhaling or touching [Purple’s] powder that may migrate from a Purple® mattress over the lifetime of the mattress.” -“Exposures would be hundreds of times lower than everyday particulate dust levels that have been determined to be safe even for sensitive individuals."

So as you can see, there's no reason to worry about the safety of the Purple mattress.

Purple also wrote a detailed article describing the powder and what exactly the function is of the powder.

You can read the article here, but if you're curious - here is an overview of the main points about the Purple powder:

Results of the Purple mattress lawsuit:

Nonbiasedreviews has a good overview of what the results were of the lawsuit. Especially speculating what the results were for the Honest Mattress Reviews website. It goes without saying that Purple defending themselves from the claims has been good publicity (although some people argue that suing reviewers is bad practice - and that Purple made a mistake with that).

Here's Nonbiasedreviews on the results for Honest Mattress Reviews:

Not being an insider or a lawyer, I don’t really know the result of the lawsuit.  I did however, notice a downward spiral from Honest Mattress reviews once the connection with Ghostbed was revealed.  Honest Mattress had previously taken the stance (and attacked me) that the only way to review a mattress was to use advertising, as he felt that using affiliate links made you biased.  Of course, working for Ghostbed didn’t make him biased did it?

Want to know more about the Purple mattress?

If you're curious, here's a quick recap:

The Purple mattress is a high quality mattress that helps many people sleep better. Especially if you prefer comfort and support.

Because the technology is new, we don't know much yet about longevity. However, so far it's doing well.

The mattress can be quite pricey. If you're serious about improving your sleep, this can be completely worth it though. 30 day trial.

Purple mattress was founded in 2014 by the 2 brothers Terry and Tony Pearce.
Both had a long background and experience in manufacturing, design and project management. They created Purple mattress because in their opinion a good mattress was lacking in the industry.

I recommend the mattress for:

P.S. what do you think about the lawsuit? Was Ghostbed wrong to slander Purple's name? Or is it freedom of speech to voice concerns they might have?

Let me know in the comments right now:

14 Days to Better Sleep for life

Join thousands by trying the free challenge. Each day you'll receive a new sleep habit to add to your routine.

7 Weighted Blanket Alternatives That You Can Make at Home

How Long Does it Take for Melatonin to Work?

Cushion Firm vs Firm: Which Is Better for Which Type of Sleeper?

Join the 28 day Sleep Challenge and learn how to sleep better for life. You'll get:

Sleepinvestor.com is a participant in the Amazon Services LLC Associates Program, an affiliate advertising program designed to provide a means for us to earn fees by linking to Amazon.com and affiliated sites. This comes at no cost to you, the reader.

Should You get Sun Exposure in the Morning?

Should You get Sun Exposure in the Morning?

Should You Worry About EMF’s (Electro Magnetic Fields)? Plus 7 Tips to Remove Unnecessary EMF Sources.

Ever wished you could get the cliff's notes to peaceful sleep? You know, just go straight to what works, and forget everything else. 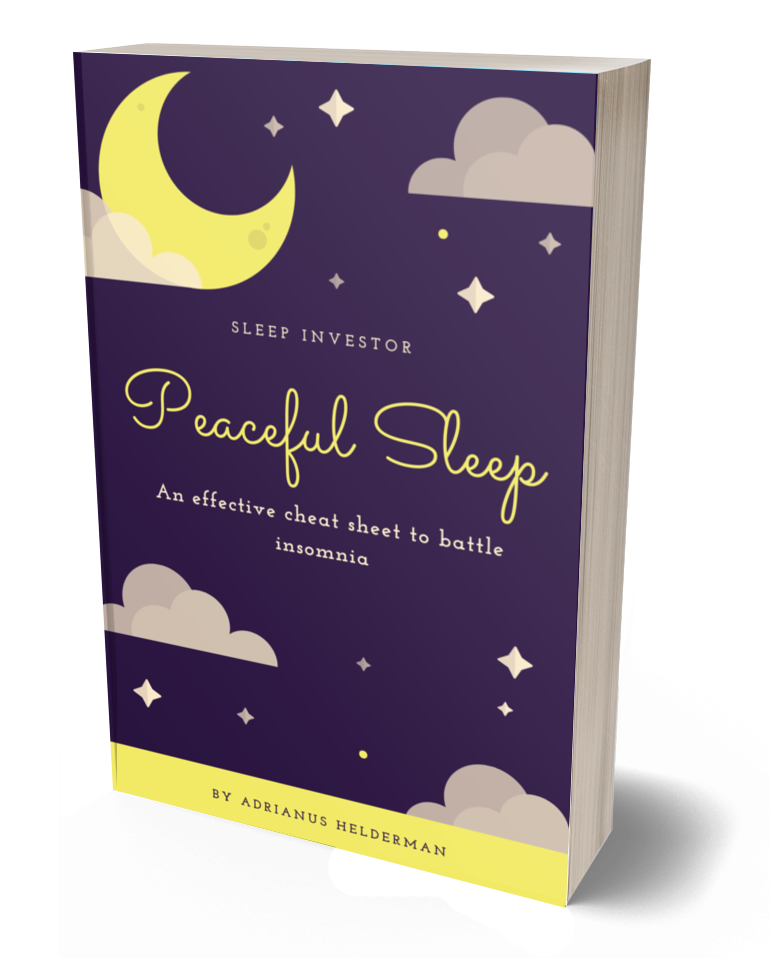 Well, here's your chance. Get my cheat sheet 28 days to Peaceful Sleep, along with weekly actionable sleep tips delivered directly into your inbox. Just type in your email address below.