You have reached the cached page for https://www.amazon.com/Playlist-Very-Best-Ciara/dp/B005H1SGDU
Below is a snapshot of the Web page as it appeared on 1/15/2021 (the last time our crawler visited it). This is the version of the page that was used for ranking your search results. The page may have changed since we last cached it. To see what might have changed (without the highlights), go to the current page.
You searched for: Playlist: The Very Best of Ciara Ciara We have highlighted matching words that appear in the page below.
Bing is not responsible for the content of this page.
Ciara - Playlist: The Very Best Of Ciara - Amazon.com Music 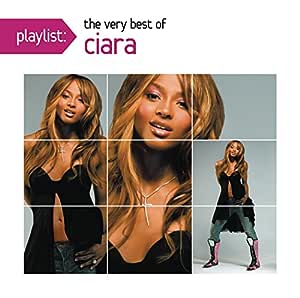 $13.31
+ Free Shipping
Sold by: uniqueplace-usa
Have one to sell?
Sell on Amazon

Playlist: The Very Best Of Ciara

Each release in the Playlist series tends to be pitched somewhere between a proper overview and a rarities collection. The approach can be aggravating to both casual and loyal fans of a given artist. Sure enough, this is the case with Ciara's Playlist, which covers 2004's Goodies through 2010's Basic Instinct. During this period, Ciara delivered nine singles to the Top Ten of Billboard's R&B/Hip-Hop chart. Only five of them are here; "Oh," "Get Up," and "Ride" are missing, while "Like a Boy" appears in the form of a Jonathan Peters dancefloor remix. This leaves plenty of room for other material, from "Speechless" (an excellent single that flopped) to "The Title" (a solid, L.T.D.-sampling album cut) to the "slow bass remix" of "Gimme Dat" (which easily trumps the original mix). The singer's catalog deserves better than this. - Playlist: The Very Best of Ciara.

4.1 out of 5 stars
4.1 out of 5
21 global ratings
How are ratings calculated?
To calculate the overall star rating and percentage breakdown by star, we don’t use a simple average. Instead, our system considers things like how recent a review is and if the reviewer bought the item on Amazon. It also analyzes reviews to verify trustworthiness.
Top reviews

H. J. Hagenbeek
4.0 out of 5 stars I can't believe it
Reviewed in the United States on February 8, 2012
Verified Purchase
Ciara's release schedule is the best proof of what is wrong with the music industry.

1. Her third album Fantasy ride was introduced through a piece in the Billboard magazine as a 3 disc album with every disc focusing on the three styles of Ciara's music. This marketing tool was ruined through numerous delays of the release-date and when finally released it was just a single disc with the three styles mixed all over this disc which made it an uneven album to listen to. And to my surprise once I received this album I found out that her hitsingle "Go girl" was not even on it, as I am an old fashioned record buyer the only way to obtain a copy of that song was through a re-realease of this album that included a DVD with this song on it.

2. You would expect that her label would have learned from the past but releasing her 4th album Basic Instinct was too much for her label again, while she enjoyed one of her bigger hits with Ride (featuring Ludacris)in the summer (what better marketing tool than a hitsong on the radio) the album was delayed several times. The sales of this album were disappointing, and left het label puzzled I assume about the reasons why.
I can give them it in a nutshell: Releasing an album just before Christmas when there is a glut of new material coming out and airplay from her biggest hit single for some times waning doesnot look like it is the smartest move.

3. You would think that the release of a Best of album would not cause any delays, but leave it to Ciara's label to mess this up too. So far (it is now 20.03.2012) the release date still stands on 24.01.2012 but at this time with no scheduled shipping date. And Amazon seems to be puzzled to what happened with this release as it gives no clues when it will be released. In the middle of May out of the blue there was suddenly the message that the album would be released on the 29th of May 2012, as there is now a tracklisting available it seems that this date would be met by her record label. (Cross my fingers).

Looking over the tracklisting however I wonder why the labels continue to call collections like this "the "very best of". The hit "Go girl" is once again overlooked. So the only way I can listen to this song is by playing the DVD-version, which is a hassle I would love to have done without. And surprise surprise her biggest hitsingle of the past few years "Ride" is missing too, if only the people that decide upon the track selection would be music fans that know how annoying it is to see album tracks and not the singles on a "best of" album. I assume the reason the released songs as singles was because they thought the songs were the best of the album they came from, so the reasons for including album tracks and omitting singles puzzles me.

All in all it is a nice collection that shows her talent but with the exeption of a couple of remixes there is no new music on this "very best of". Nice for someone that doesnot own all of her albums, but no reason for the true fan to buy this album as it is not even a complete overview of her hits, which would be the only reason for a fan to own it. No doubt this album will bomb at retail and her label will have no clue about the true reasons it was not selling, the talents of this lady are obvious for all but the execs at her label who will drop her due to lacking sales, for which they are solely responsible.

I hope for Ciara's sake she will find a label that values her better than her current label. She is a talented lady that deserves so much better than the deal she had in the past 5 years.

As a record buyer I sincerily hope that the industry as a whole will learn from this sad case of ignoring the record buying customers as this happens way too often. (but I think that I have to keep on dreaming)

Narnilla Butler
4.0 out of 5 stars Four Stars
Reviewed in the United States on May 14, 2017
Verified Purchase
I like Ciara and in the future I will get more thank you
Read more
Helpful
Report abuse

ericka brown
5.0 out of 5 stars love it
Reviewed in the United States on November 11, 2019
Verified Purchase
i play it everyday
Read more
Helpful
Report abuse

Kenya
4.0 out of 5 stars Classic Ciara!
Reviewed in the United States on September 10, 2014
Verified Purchase
There are a lot of collaborations and good dance songs.
Read more
Helpful
Report abuse

sarah ringer
5.0 out of 5 stars Five Stars
Reviewed in the United Kingdom on May 8, 2015
Verified Purchase
Very happy with my purchase thanks!
Read more
Report abuse