You have reached the cached page for https://www.rottentomatoes.com/m/nine_lives_2016
Below is a snapshot of the Web page as it appeared on 11/26/2020 (the last time our crawler visited it). This is the version of the page that was used for ranking your search results. The page may have changed since we last cached it. To see what might have changed (without the highlights), go to the current page.
You searched for: Nine Lives movie We have highlighted matching words that appear in the page below.
Bing is not responsible for the content of this page.
Nine Lives (2016) - Rotten Tomatoes
Home
Top Box Office
Tickets & Showtimes
DVD & Streaming
TV
News 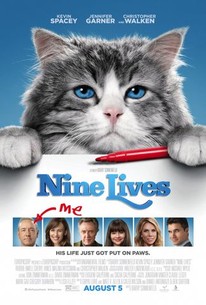 Not meow, not ever.

Tom Brand (Kevin Spacey) is a billionaire whose workaholic lifestyle takes him away from his loving wife Lara and adorable daughter Rebecca. Needing a present for Rebecca's 11th birthday, Brand buys a seemingly harmless cat from a mysterious pet store. Suddenly, a bizarre turn of events traps poor Tom inside the animal's body. The owner of the business tells him that he has one week to reconnect with his family, or live out the rest of his days as a cute and furry feline named Mr. Fuzzypants.

On DVD This Week: Star Trek Beyond, Outlander, Bad Moms, and More
Box Office: Bad Sells as Squad Sets Records
How Family-Friendly are Suicide Squad, The Little Prince, and This Week’s Other Films?
View All