You have reached the cached page for https://www.amazon.com/Mrs-Arris-Goes-Paris-DVD/dp/B000W2FIJY
Below is a snapshot of the Web page as it appeared on 11/24/2020 (the last time our crawler visited it). This is the version of the page that was used for ranking your search results. The page may have changed since we last cached it. To see what might have changed (without the highlights), go to the current page.
You searched for: Mrs. 'Arris Goes to Paris movie We have highlighted matching words that appear in the page below.
Bing is not responsible for the content of this page.
Amazon.com: Mrs 'Arris Goes To Paris [DVD]: Anthony Shaw, Angela Lansbury, Diana Rigg, Omar Sharif: Movies & TV 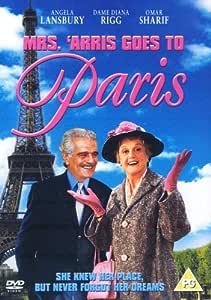 A delightful tale of a housemaid who spends her days cleaning the homes of the well-to-do. Mrs. Harris or arris as pronounced in her native cockney (Angela Lansbury) epitomises her generation of honest, working-class Brits. She knows her place, though that never stops her from speaking her mind or dreaming of luxuries. Admiring a beautiful Dior gown in her employer s closet, Mrs. arris is determined to buy one of her own. Working day and night, she finally saves enough to go to Paris and visit the House of Dior, but learns that buying an original couture creation is harder than simply having the cash. After hesitation, Dior s head saleswoman Madame Colbert (Dame Diana Rigg) escorts her in and seats her next to the Marquis de Chassagne (Omar Sharif), a count who is quite taken by this friendly English woman. When her dream passes before her eyes on the beautiful store model Natasha, Mrs. arris orders the same gown for herself, but there is talk that the Dior name will be tarnished if Mrs. arris wears the exclusive design. However the sweet Mrs. arris has made many friends in Paris and all are intent on making sure her dream comes true.

4.0 out of 5 stars
4 out of 5
346 global ratings
How are ratings calculated?
To calculate the overall star rating and percentage breakdown by star, we don’t use a simple average. Instead, our system considers things like how recent a review is and if the reviewer bought the item on Amazon. It also analyzes reviews to verify trustworthiness.

maureen
1.0 out of 5 stars Taken by Seller
Reviewed in the United States on June 29, 2019
Verified Purchase
I was so looking forward to this DVD... I had no idea that this was shipping from the UK. When I tried to put it in my DVD player it gave me an error message saying “Playback prohibited by area limitations” ... it could not be played in this region of the world?. If you are shipping to the US you have to know that this would not work? I feel like I was taken.
Read more

Jonathan Hansen
4.0 out of 5 stars Saved by Power-DVD & Pure Video DVD Codecs
Reviewed in the United States on March 17, 2017
Verified Purchase
This video hasn't been available for American consumers since the VHS release. When I ordered my DVD version, I thought it was an all regions blu-ray. Hopefully the new blu-ray player is updated enough to decode it. The page now identifies product as a DVD, not blu-ray. So it wasn't quite what I expected. It was ordered 2 days before Christmas and was in-transit about 6 weeks for Germany to USA.

My product says it's all regions DVD, and our Samsung blu-ray can't read it. However, all my computers have aftermarket DVD codecs installed, which were not included in Windows 8-10. My computer input to the TV does play this DVD nicely. It is not region 2, but the computer DVD codecs recognized the all-regions encoding.
Read more
4 people found this helpful
Helpful
Comment Report abuse

K A Rosenwink
2.0 out of 5 stars FOCUS NOT SHARP
Reviewed in the United States on May 15, 2019
Verified Purchase
This disk plays in soft focus all the way through as if it is a copy of a copy. I asked the vendor if it was a legitimate copy as I was concerned it was pirated. However, the vendor assured me it was legitimate. They could not explain why the soft focus.
Read more
3 people found this helpful
Helpful
Comment Report abuse

S Jones
3.0 out of 5 stars Good but with a "con"
Reviewed in the United States on July 8, 2019
Verified Purchase
Movie was clean, decent, predictable...a good diversion with a good cast...and Angela Lansbury is excellent!! However, I could watch it on my computer but NOT on a DVD player which limits where I can watch.
Read more
2 people found this helpful
Helpful
Comment Report abuse

Tony Robbins
5.0 out of 5 stars Shared passion has an effect
Reviewed in the United States on August 26, 2020
Verified Purchase
I was surprised at how entertaining this movie was. I thought it might be a little thin and the professional cast may have to do a lot of carrying of the story, but they didn’t have to do too much heavy lifting. I especially liked how one persons passion could affect those around them, provided the passionate drive wasn’t a fixation
Read more
Helpful
Comment Report abuse

Sharon
5.0 out of 5 stars Delightful
Reviewed in the United States on September 1, 2018
Verified Purchase
Loved this movie. Angela Lansbury plays a London charlady who winds up in Dior in Paris. Beautiful shots of Paris and of 1950s haute couture, and an uplifting story line that includes romance, kindness and perseverance.
Read more
2 people found this helpful
Helpful
Comment Report abuse

nanajoy
1.0 out of 5 stars Will not play on our CD player
Reviewed in the United States on November 20, 2018
Verified Purchase
I always try to give great reviews, but am so disappointed that the CD I ordered does not play on either one of our CD players. I did not realize a CD from UK will not read on an American CD player...the sellers should have made a note of that. I cannot return it, since it has been opened.
Read more
2 people found this helpful
Helpful
Comment Report abuse
See all reviews

Alsome
4.0 out of 5 stars A Trip Well Worth Taking!
Reviewed in the United Kingdom on October 1, 2015
Verified Purchase
Thoroughly enjoyable old-fashioned style film about a lowly London charwoman (Angela Lansbury), who dreams of owning her own Dior dress. Having scrimped and saved, she travels to Paris where an assortment of people, including delightful Diana Rigg and an elegant Marquis, Omar Sharif, in one of his best latter-day performances, see to it that Mrs 'Arris dream does come true despite some obstacles. Beautifully cast and performed, and utterly charming. Originally made for television. Acceptable picture quality for this release by Pegasus.
Read more
4 people found this helpful
Report abuse

D.J. Graham
5.0 out of 5 stars Angela Lansbury is Charming as Mrs. 'Arris
Reviewed in the United Kingdom on March 7, 2011
Verified Purchase
Mrs 'arris Goes to Paris is a charming little film staring Angela Lansbury in the title role as a working class housekeeper from London who dreams of travelling to Paris and purchasing a Dior dress after seeing one hanging up in her employers room. She saves up for three years and when the time finally arrives, Mrs. 'arris sets off to Paris in hope that she will be there and back within the day coming back with the dress she has longed after for so many years. However, as she soon finds out, the fashion world of Paris is far from her humble London home but she keeps her head high and never lets go of her dreams.

Mrs. 'arris is a wonderfully warm character played with so much affection by the charming Angela Lansbury. The film is one of hope and happiness and Lansbury was perfectly cast as a woman who whilst searching for her own dreams, helps other peoples dreams come true as well. The film is perfect to watch on a Sunday afternoon which will leave you smiling and thinking about making your own dreams come true as well.
Read more
6 people found this helpful
Report abuse

Mrs. T. Jones
4.0 out of 5 stars Mrs 'Arris goes to Paris
Reviewed in the United Kingdom on October 14, 2018
Verified Purchase
Charming, easy to watch, Sunday afternoon film with the feel-good factor. and definitely appealing to an older generation able to relate to the time. Probably a younger demographic would also be entertained. I had read the book donkey's years ago and was thrilled to see the film - and bought another copy for a friend.
Read more
One person found this helpful
Report abuse

Cooperk
5.0 out of 5 stars Blast from the past
Reviewed in the United Kingdom on March 17, 2018
Verified Purchase
I remember watching this film on tv after school many moons ago. Had never been able to find it again until now! Fab, feel good, family friendly film!
Read more
2 people found this helpful
Report abuse

dollydip
5.0 out of 5 stars Great film!
Reviewed in the United Kingdom on July 2, 2016
Verified Purchase
Excellent film and worth watching! It stars Angela Lansbury and Omar Shariff and its such a feel good film and the photography is wonderful whats not to like! Definitely recommend this film -five stars!
Read more
3 people found this helpful
Report abuse
See all reviews

Page 1 of 1 Start overPage 1 of 1
This shopping feature will continue to load items when the Enter key is pressed. In order to navigate out of this carousel please use your heading shortcut key to navigate to the next or previous heading.
Back
Next
Pages with related products. See and discover other items: angela lansbury movie