You have reached the cached page for https://www.rottentomatoes.com/m/midnight_run
Below is a snapshot of the Web page as it appeared on 4/10/2021 (the last time our crawler visited it). This is the version of the page that was used for ranking your search results. The page may have changed since we last cached it. To see what might have changed (without the highlights), go to the current page.
You searched for: Midnight Run movie We have highlighted matching words that appear in the page below.
Bing is not responsible for the content of this page.
Midnight Run (1988) - Rotten Tomatoes
Home
Top Box Office
Tickets & Showtimes
DVD & Streaming
TV
News 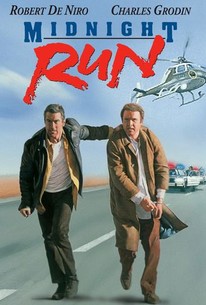 Midnight Run: Official Clip - It's Not a Payoff, It's a Gift

When Eddie Moscone (Joe Pantoliano) hires tight-lipped bounty hunter Jack Walsh (Robert De Niro) to locate a mob accountant named "The Duke" (Charles Grodin) and bring him to L.A., Eddie tells Jack that the job will be simple, or a "midnight run." But when Jack finds The Duke, the FBI and the mob are anxious to get their hands on him. In a cross-country chase, Jack must evade the authorities, hide from the mob and prevent The Duke's erratic personality from driving him mad.