You have reached the cached page for https://www.dailymail.co.uk/news/article-6357339/Michigan-North-Dakota-weigh-bringing-legal-pot-Midwest.html
Below is a snapshot of the Web page as it appeared on 1/20/2021 (the last time our crawler visited it). This is the version of the page that was used for ranking your search results. The page may have changed since we last cached it. To see what might have changed (without the highlights), go to the current page.
You searched for: Michigan North Dakota We have highlighted matching words that appear in the page below.
Bing is not responsible for the content of this page.
Michigan, North Dakota weigh bringing legal pot to Midwest | Daily Mail Online

Weed is back on the ballot: Voters in Michigan and North Dakota decide whether they'll be the first Midwest states to legalize recreational marijuana while medicinal cannabis is on the line in Utah and Missouri

By Marlene Lenthang For Dailymail.com and Associated Press

In Michigan and North Dakota - where medicinal marijuana is legal - voters will decide whether to legalize recreational weed, a decision that would make them the first states in the Midwest to do so.

So far 31 states and the District of Columbia have laws legalizing marijuana in some form.

Of those only nine states and the District of Columbia have legalized recreational pot for people over than age of 21. 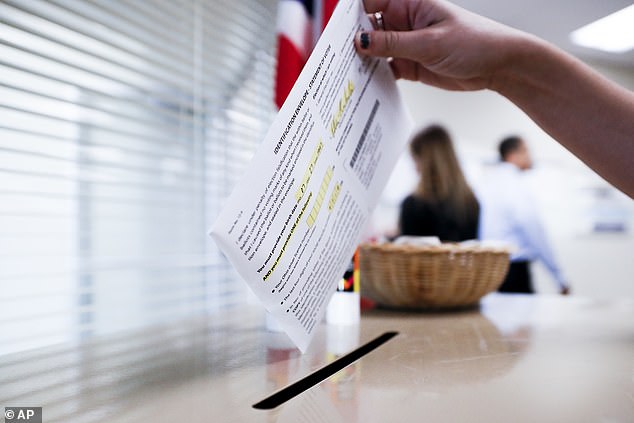 Michigan and North Dakota will vote to legalize recreational marijuana, and Utah and Missouri will vote on medicinal cannabis in the midterm elections on Tuesday

In June, Canada, which shares a border with Michigan and North Dakota, legalized the recreational use of marijuana for adults.

States voting on marijuana in the midterms

'Troopers that work along the state line are very cognizant of what's going on up north,' Indiana State Police Sgt. Ron Galaviz, a spokesman for the agency's Fort Wayne Post, which stretches north to the Michigan line said.

He said if the referendum passes, 'we know some of our citizens are going to go over to Michigan to partake.' And those who return either under the influence or in possession of pot may learn the hard way that it remains illegal in Indiana and Ohio, which overwhelmingly rejected a 2015 legalization measure.

'We'll enforce our laws as written. If you're traveling to or through our state, we really don't want you bringing it down here,' he added.

According to the polls Michigan seems likely to legalize marijuana, with recent Gallup and the Pew Research Center polls showing it had the support of more than 60 percent of respondents.

Supporting the measure is the Coalition to Regulate Marijuana Like Alcohol, which has been endorsed by a national organization of black-owned businesses and a group of retired Michigan law enforcement officers. Opposing it is Healthy and Productive Michigan and many law enforcement agencies, prosecutors, chambers of commerce and religious groups.

Neither side had a major funding edge in the days before the election.

Michigan's measure, modeled similarly to Colorado's, would create a state licensing system for weed businesses then allow cities and townships to restrict them.

Supporters say it could raise $130million in additional tax revenue each year - money that could be used towards roads, schools, and local governments. Opponents argue that the cannabis will land in the hands of young children and lead to drug abuse and car crashes. They also say its 16 percent tax rate is too low. 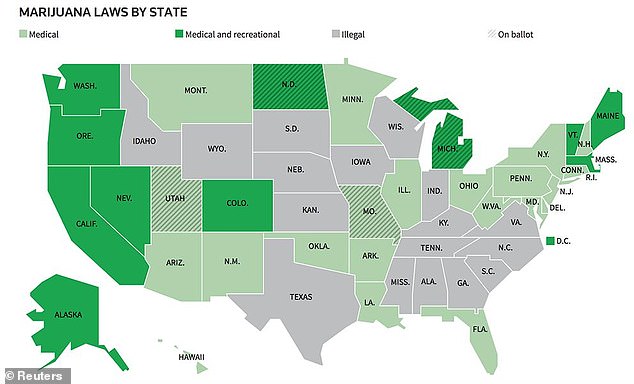 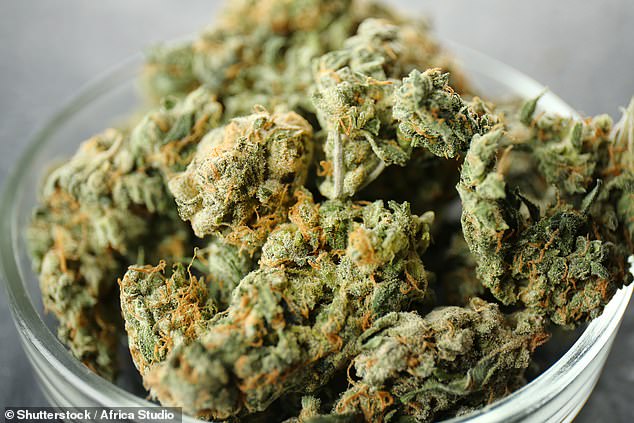 Michigan is expected to pass the proposal, but it's up in the air in North Dakota, where poll numbers have been scattered

In North Dakota the proposal to legalize marijuana hasn't received significant funding from outside groups and it's not clear just how much  public support the measure has. There are no limits on cannabis possession, sale, and regulation in the proposal.

North Dakota is also still in the process of setting up its medical marijuana system, which was approved by a wide margin just two years ago.

Poll numbers from October yielded conflicting results, one showing 51 per cent in favor of passing the initiative and another showing 65 per cent opposition, according to the Washington Post.

Medical marijuana is also on the ballot in Utah and Missouri.

In Utah the Mormon church, which has outsized sway, supports the proposal after years of opposition after comprising with medical marijuana advocates and agreeing upon parameters for a law that suits all sides. 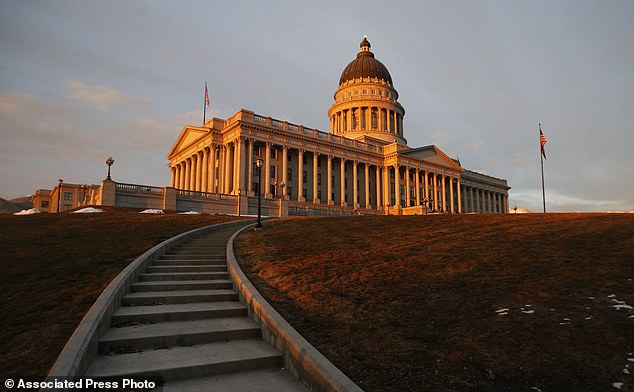 After months of fierce debate Mormon church leaders reached a compromise with medical marijuana advocates in Utah, agreeing upon parameters for a law that suits all sides. This means the weed proposal will likely pass this election 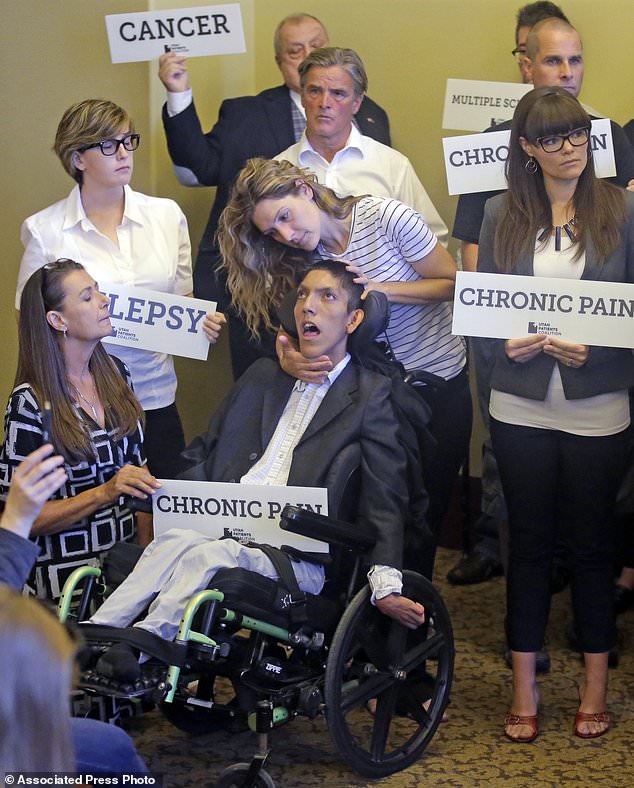 Campaigners rally for the approval of medicinal marijuana in Utah. Win or lose, Utah state leaders have vowed to join 30 other states in legalizing pot for people with certain conditions

The bill will not allow citizens to grow their own plants and will establish a state-run medical marijuana distribution network.

Smoking weed will remain illegal but the sick will be able to eat marijuana-infused foods and use vape pens.

Utah's governor said he will call lawmakers into a special session after the midterm election to pass the deal into law, even if the initiative fails.

In Missouri voters will consider three separate medical marijuana initiatives with differing details on how much to tax plants and whether patients can grow their own plants.

There is little polling in Missouri on legalizing weed but a survey in August showed voters supported it in general terms, according to an August study.