You have reached the cached page for https://www.theguardian.com/world/2020/oct/27/no-time-for-goodbyes-tributes-to-six-people-lost-to-coronavirus
Below is a snapshot of the Web page as it appeared on 12/8/2020 (the last time our crawler visited it). This is the version of the page that was used for ranking your search results. The page may have changed since we last cached it. To see what might have changed (without the highlights), go to the current page.
You searched for: Michael Gottlieb We have highlighted matching words that appear in the page below.
Bing is not responsible for the content of this page.
No time for goodbyes: tributes to six people lost to coronavirus | Coronavirus | The Guardian
Coronavirus

No time for goodbyes: tributes to six people lost to coronavirus 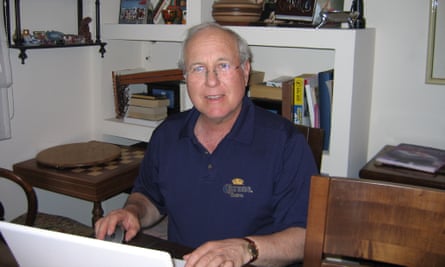 The sound of the phone ringing once filled 49-year-old Rivka Gottlieb with dread. Her father was admitted to hospital in late March after contracting coronavirus but, unable to be with him because of lockdown, she nervously awaited every piece of news on his condition.

In mid-April, the phone rang and the news she feared came. She was devastated – but even then she couldn’t say goodbye in the way she wanted.

Gottlieb’s father is one of more than 60,000 people across the UK to have died from or with the deadly virus, the vast majority of them elderly, with partners, sons, daughters and other loved ones.

For many touched by these deaths, the strangeness of life in lockdown is made stranger and more isolating still by the numbness of grief. And by the knowledge that they were unable to say farewell in the way they would have imagined and wished. This is one of the reasons the Covid-19 Bereaved Families for Justice group is calling for pandemic bereavement support.

Here are the stories behind six of the more than 60,000 deaths – and the difficult goodbyes their relatives had to make.

“The last contact we had with him was by text”

Michael Gottlieb, 73, had a strong sense of justice, his daughter said, but in many ways “he was a little boy who never grew up”. He was well known for his sense of humour and was incredibly patient, particularly when teaching Hebrew to children at the local synagogue.

He first started showing symptoms in late March and was taken to hospital in London with breathing difficulties on the last day of that month. Two days later, Rivka’s mother was also taken to hospital with symptoms. On 3 April, her dad was sent to an intensive care unit (ICU), sedated and put on a ventilator.

When Rivka’s brother got a call to say their dad wouldn’t last much longer, they had to make a difficult decision on whether one of them should go to the hospital. “Both my brother and I agreed that we didn’t want to remember him in that state,” Rivka said. “But it’s still one I think about because there was no goodbye. The last contact we had with him was by text before he was taken to ICU. That’s it, that’s all we have.”

“It was as a scene in a nightmare”

Bernard Fisher, 82, was described as a sociable, beloved grandad with a brilliant sense of humour. “Since he passed away, I’ve had so many people come up and say: ‘Oh, your dad always talked to me,’” his daughter, Gaynor Griffin, said. “It even surprised me how many people he sort of befriended, he was just that sort of person.”

Within hours of an ambulance taking Bernard to hospital, Gaynor’s mother received a call to say nothing could be done. They both rushed to hospital to say goodbye, but it was too late.

“We were numb. We were given PPE so we could go and see him. It was as a scene in a nightmare,” Gaynor said. She could see her dad through a doorway, but Gaynor decided not to go in. “He just didn’t look like dad and I thought I don’t want that image.”

For Gaynor, it’s been difficult to grieve and move on as the crisis is on the news every day. “If you lose somebody from cancer, every now and then something might come up on the news about cancer and it brings it all back. But for us, it’s every day, it’s relentless.”

“Crying and shaking, she fumbled putting on the PPE”

Özcan Aygın, 85, was described as a healthy, loving grandfather who liked to keep busy and loved travelling, particularly to Cyprus where he was born, his daughter Figen Aygın-Çakir said. “He would lavish love and attention on his only child, me, and his grandchildren.”

Özcan started experiencing symptoms of coronavirus as early as February and went into hospital on his birthday, 4 April. She managed to speak to him on the phone when the ambulance arrived to take him. “He sounded very scared. And I managed to say: ‘I love you’ to him. And then he started crying, and I started to cry,” Figen said.

She was able to speak to him again on the phone that night and felt hopeful, but within a couple of days she was told he wasn’t likely to survive. Figen, who lives in Leeds, knew she wouldn’t have enough time to travel to London, so suggested her 23-year-old daughter go. “Crying and shaking, she fumbled putting on the PPE,” she said.

Though they were initially told Özcan was improving, they then received another call, this time saying he had died. Figen says she is angry at how the government has handled the pandemic and calls for lessons to be learned.

“That was my one final expression of love”

James Leonard Sykes, 90, better known as Len, was described by his son Tim as a talented mechanical engineer who liked to make people laugh. He was also proudly leftwing and abhorred bigotry. “He used to tell how as a 14-year-old he put his first boss in his place for making an antisemitic comment,” Tim said.

Len, who died in the early hours of the morning of 7 April, is thought to be one of the first Covid-19 patients in the hospital that took care of him in Deal, Kent.

“To our surprise they allowed my mother to visit him. We were all very torn about whether she should or not because we were dealing with the fact that we were likely to lose him and also terrified that she might get Covid as well,” Tim said. She ended up going to the hospital and seeing her husband for a couple of hours.

Tim describes losing his dad during lockdown as devastating. “I made a card for him with photos of relatives, myself and him, and sent that to the hospital. And I know that was there. That was my one final expression of love.”

“Family and friends lined the street to say goodbye”

June Lever, 89, was described as a cheerful, family-oriented woman who everyone went to for support and advice. “I didn’t just love my mom, I also admired her,” her daughter, Carol Lever, said.

June, who lived in Treorchy, Rhondda, had contracted Covid-19 within weeks of moving to a care home. One Saturday while speaking to her on the phone, Carol said she had a feeling it would be the last time they’d talk. “I just made sure that I told her how much I loved her. As I couldn’t be there to hold her hand, I just said everything that I wanted to say as if I was there.”

Due to restrictions in place, only seven people were allowed to attend her funeral. Carol decided to lead the service herself to make it as personal as possible. “When I came out, family and friends lined the street to say goodbye,” she said. They were all socially distancing.

“It was really difficult because all I wanted to do was hug my family and talk to my mom’s friends, but I couldn’t. None of us were allowed to comfort each other.”

“I begged them to let me see him”

Bassodeo Rambojun, 85, was a kind, cheerful father and grandfather who loved to cook. The former Royal Mail worker, who lived in west London, was honoured by the Queen for his 25 years of service and would have celebrated 50 years of marriage.

Bassodeo was admitted to hospital in March after a fall at home but contracted Covid-19 and died on 3 April. His daughter, Devita Michael, said the confusion in the hospital, and the government’s lack of guidance at the height of the pandemic, had been traumatising. She was deeply angered by how her father was cared for while in hospital.

She described a daily battle to speak to her dad or try to see him. “I had to force myself to the hospital and begged them to let me see him,” Devita said. She was eventually allowed a few minutes with her dad. “The safety issue was paramount and I understand that, but you can’t have two minutes to say goodbye, it’s impossible,” she said. Devita still has questions and is calling for a public inquiry to ask questions of the NHS and the government.