chancellor of Germany
verifiedCite
While every effort has been made to follow citation style rules, there may be some discrepancies. Please refer to the appropriate style manual or other sources if you have any questions.
Select Citation Style
Share
Share to social media
Facebook Twitter
URL
https://www.britannica.com/biography/Angela-Merkel
Feedback
Thank you for your feedback

Join Britannica's Publishing Partner Program and our community of experts to gain a global audience for your work!
External Websites
Britannica Websites
Articles from Britannica Encyclopedias for elementary and high school students.
print Print
Please select which sections you would like to print:
verifiedCite
While every effort has been made to follow citation style rules, there may be some discrepancies. Please refer to the appropriate style manual or other sources if you have any questions.
Select Citation Style
Share
Share to social media
Facebook Twitter
URL
https://www.britannica.com/biography/Angela-Merkel
Feedback
Thank you for your feedback 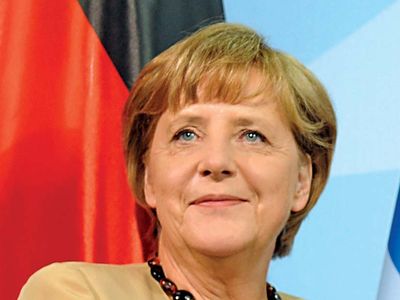 Where was Angela Merkel educated?

Merkel finished (1973) high school in Templin, East Germany, and received (1978) a bachelor’s degree in physics at Karl Marx University (now the University of Leipzig). She then worked at the Central Institute of Physical Chemistry of the Academy of Sciences in East Berlin, earning (1986) a doctorate for her thesis on quantum chemistry.

What did Angela Merkel accomplish?

During her time as the first female chancellor of Germany, Merkel was a leading figure in European politics, championing austerity as the path to recovery for Europe’s damaged economies. Faced with Europe’s gravest refugee crisis since World War II, she maintained that Germany would keep its borders open in the face of the humanitarian emergency.

What did Angela Merkel do to help the world?

When hundreds of thousands of migrants fleeing conflicts in Syria, Afghanistan, and elsewhere flocked to the European Union, Merkel advocated for the resettlement of large numbers of people in Germany. As a result, more than one million migrants entered Germany in 2015 alone, sparing them the danger of having to return to their war-torn countries.

Angela Merkel, née Angela Dorothea Kasner, (born July 17, 1954, Hamburg, West Germany), German politician who served as chancellor of Germany from 2005 to 2021. She was the first woman to hold that office and the second longest-serving chancellor in German history.

Merkel’s parents, Horst and Herlind Kasner, met in Hamburg, where her father was a theology student and her mother was a teacher of Latin and English. After completing his education, her father accepted a pastorate in Quitzow, Brandenburg, and the family relocated to East Germany (German Democratic Republic) just weeks after Merkel’s birth. In 1957 they moved again to Templin, where Merkel finished high school in 1973. Later that year she went to Leipzig to study physics at Karl Marx University (now the University of Leipzig). There she met her first husband, fellow physics student Ulrich Merkel, and the two were married in 1977. After earning her diploma in 1978, she worked as a member of the academic faculty at the Central Institute of Physical Chemistry of the Academy of Sciences in East Berlin. In 1982 Merkel and her husband divorced, though she kept his last name. She was awarded a doctorate for her thesis on quantum chemistry in 1986.

As was the case for most children growing up in the German Democratic Republic, Merkel participated in the state’s youth organizations. She was a member of the Young Pioneers (from 1962) and the Free German Youth (from 1968). Her involvement with the Free German Youth has led to controversy, as some of her former colleagues from the Central Institute of Physical Chemistry claimed that she was active as a secretary for agitation and propaganda at the institute, though Merkel maintained that she was responsible for cultural affairs (e.g., procuring theatre tickets). Merkel was not nor did she apply to be a member of the Socialist Unity Party, and when approached by personnel of the Ministry for State Security (Stasi) to become an informant, she refused.

After the fall of the Berlin Wall in 1989, Merkel joined the newly founded Democratic Awakening and in February 1990 became the party’s press spokesperson. That month the party joined the conservative Alliance for Germany, a coalition with the German Social Union (DSU) and the Christian Democratic Union (CDU). Several days prior to East Germany’s first and only free election in March 1990, it was revealed that Democratic Awakening’s chairman, Wolfgang Schnur, had been working as a Stasi informant for years. Although the news shook Alliance supporters, the coalition was victorious, and Democratic Awakening became part of the government, despite having won a mere 0.9 percent of the votes. Merkel became deputy spokesperson of the government of Lothar de Maizière (CDU). She joined the CDU in August 1990; that party merged with its western counterpart on October 1, the day before the reunification of Germany.

Britannica Quiz
Physics and Natural Law
What force slows motion? For every action there is an equal and opposite what? There’s nothing E = mc square about taking this physics quiz.

In the first postreunification election, in December 1990, Merkel won a seat in the Bundestag (lower house of parliament) representing Stralsund-Rügen-Grimmen. She was appointed minister for women and youth by Chancellor Helmut Kohl in January 1991. Kohl’s choice of the young female political newcomer from East Germany appealed to several demographics and earned Merkel the nickname “Kohls Mädchen” (“Kohl’s girl”). Maizière, who had become the CDU’s deputy chairman after the eastern and western parties merged, resigned from his position on September 6, 1991, because of accusations of having worked for the Stasi. Merkel was elected to replace him in December of the same year. After the 1994 election Merkel became minister of environment, conservation, and reactor safety, and she presided over the first United Nations Climate Conference in Berlin in March–April 1995. In September 1998 the CDU was ousted by Gerhard Schröder and the Social Democratic Party of Germany (SPD). Merkel was elected secretary-general of the CDU on November 7. She married her longtime companion, chemistry professor Joachim Sauer, on December 30 of that year.

In late 1999 a finance scandal hit the CDU, and Kohl was implicated in the acceptance and use of illegal campaign contributions. In an open letter published on December 22, Merkel, Kohl’s former protégée, called upon the party to make a fresh start without its honorary chairman. Merkel’s stance greatly increased her visibility and popularity with the German public, although it upset Kohl loyalists. On April 10, 2000, Merkel was elected head of the CDU, becoming the first woman and the first non-Catholic to lead the party. As CDU leader, Merkel faced the lingering effects of the finance scandal and a divided party. Although Merkel had hoped to stand as a candidate for chancellor in the 2002 election, a majority of her party expressed a preference for Edmund Stoiber of the Christian Social Union (CSU), the CDU’s sister party in Bavaria. After the CDU-CSU narrowly lost the election, Merkel became leader of the opposition.