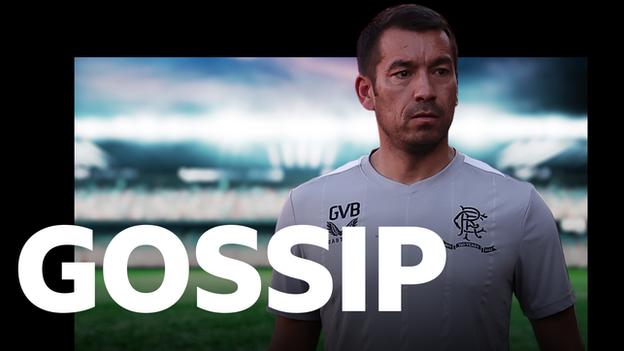 Rangers manager Giovanni van Bronckhorst may switch to a 3-5-2 formation, with 18-year-old Leon King alongside Ben Davies and Connor Goldson, for the Champions League group game at Liverpool. (The Scotsman)

From financial basket-case to glamour of Anfield

Ex-Scotland midfielder Michael Stewart believes Liverpool look rattled and are ready to be taken on by Rangers. (Times, subscription required)

Liverpool manager Jurgen Klopp has described Scotland as one of Europe's hottest places to scout for football talent before his side face Rangers. (Scottish Sun)

Celtic may be without Israel forward Liel Abada, 21, for their Champions League game against RB Leipzig, with the Jewish holy day due to begin on Tuesday. (Daily Record)

Rangers midfielder Tom Lawrence has suffered an injury setback and could be ruled out until the end of the year. (Scottish Daily Express)

VAR will arrive in Scotland in a matter of weeks as the new technology is being brought into the SPFL Premiership sooner than expected. (Scottish Daily Express)

Hearts boss Robbie Neilson says Barrie McKay and Stephen Kingsley will be fit to face Fiorentina in the Europa Conference League on Thursday despite being withdrawn in the second-half of Saturday's defeat to Rangers. (Daily Record)

Midfielder Robert Snodgrass says Hearts have "come back stronger" following their relegation to the Championship two years ago given they are now facing a glamour tie against Fiorentina. (Daily Record)

Nicky Clark could prove to be the final piece in the St Johnstone jigsaw, according to Swedish midfielder Melker Hallberg. (The Courier)

Ex-Celtic defender Christopher Jullien says he learned a lot from Ange Postecoglou despite a "complicated" relationship with the Australian head coach. (Scotsman)

Liverpool boss Klopp has described former Aberdeen right-back Calvin Ramsay, 19, as "an outstanding talent" and says he is "really excited" about the Scotland Under-21 defender, who came through the Pittodrie youth ranks. (Daily Record)

RB Leipzig boss Marco Rose has vowed to play attack-minded Postecoglou at his own game when his side face Celtic. (Daily Record)