You have reached the cached page for https://nypost.com/2021/07/14/kimberly-potter-cop-in-daunte-wright-shooting-seeks-to-block-cameras-in-court/
Below is a snapshot of the Web page as it appeared on 10/27/2021 (the last time our crawler visited it). This is the version of the page that was used for ranking your search results. The page may have changed since we last cached it. To see what might have changed (without the highlights), go to the current page.
You searched for: Kimberly Potter We have highlighted matching words that appear in the page below.
Bing is not responsible for the content of this page.
Kimberly Potter, cop in Daunte Wright shooting, seeks to block cameras in court

The ex-Minnesota cop charged in the shooting death of Daunte Wright wants to ban news cameras at her upcoming manslaughter trial.

Lawyers for former Brooklyn Center Police Officer Kimberly Potter said in court papers this week that livestreaming her trial presents new safety concerns for the onetime cop, who is already the target of protests over the shooting.

Potter said she thought she had grabbed her Taser instead of her service gun during Wright’s shooting at an April 11 traffic stop.

“Near daily protests take place at her abode where she can no longer live,” Engh wrote. “Additional safety concerns have surfaced.”

Engh cited the recent trial and conviction of former Minneapolis cop Derek Chauvin in the death of George Floyd inside the same Hennepin courthouse, which included a backlash and vandalism targeting at least one witness who testified on the cop’s behalf.

Chauvin was ultimately convinced of murder and manslaughter charges in Floyd’s police custody death and sentenced to 22 1/2 years in prison.

The trial was held with an unprecedented security presence and a heavily fortified courthouse for fear of violent protests over the case, which became a rallying cry for the global Black Lives Matter movement.

Potter’s lawyers say that experience raises concerns when she has her day in court — and fears that her safety could be in further jeopardy.

Wright, 20, was stopped by police in nearby Brooklyn Center, a Minneapolis suburb, when he tried to drive away and was shot by Potter, bodycam footage shows.

She then fires off a single round as Wright drives off, crashing the car down the street.

Potter submitted her resignation but was instead fired and later charged with second-degree manslaughter in Wright’s death. 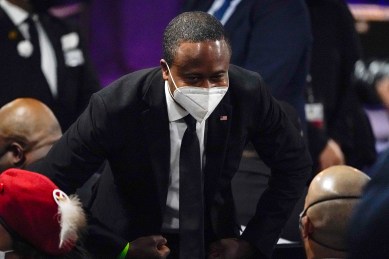 Engh argued in his court motion that he understands the high-profile nature of the case.

“We are not suggesting a closure of the courtroom doors,” he wrote. “But once the public is permitted access, even if not every spectator gets a hard seat, the Sixth Amendment requirement has been vindicated.”

He suggested the reporters covering the trial be able to watch through a closed-circuit broadcast in an adjoining room, where overflow media can be stationed.

In an earlier court filing requesting that cameras be allowed in court for the trial, prosecutors had argued that the proceedings should be fully public and live-streamed.