You have reached the cached page for https://allpoetry.com/Pablo-Neruda
Below is a snapshot of the Web page as it appeared on 2/26/2021 (the last time our crawler visited it). This is the version of the page that was used for ranking your search results. The page may have changed since we last cached it. To see what might have changed (without the highlights), go to the current page.
You searched for: José del Carmen Reyes Morales We have highlighted matching words that appear in the page below.
Bing is not responsible for the content of this page.
Pablo Neruda - Poems by the Famous Poet - All Poetry 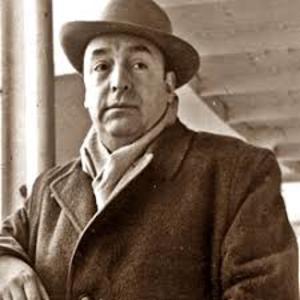 Pablo Neruda [1914-1973] was born Neftali Ricardo Reyes Basoalto, but adopted his pen name legally in 1946. Under that name he has become one one of the most famous poets of all time.
From the 1940s on, his works reflected the political struggle of the left and the socio-historical developments in South America. He was also very famous for his love poems.  Neruda's Twenty Love Poems and a Song of Despair (1924) have sold over a million copies since it first appeared.

Ricardo Reyes Basoalto was born in Parral, a small town in central Chile. His father, don José del Carmen Reyes Morales, was a poor railway worker and his mother, Rosa Basoalto de Reyes, was a schoolteacher who died of tuberculosis when Neruda was an infant. Don José Carmen moved with his sons in 1906 to Temuco, and married Trinidad Candia Marvedre.

Neruda started to write poetry when he was ten years old. At the age of twelve, he met the Chilean poet Gabriela Mistral, who encouraged his literary efforts. Neruda's first literary work, an article, appeared in 1917 in the magazine La Manana. It was followed by the poem,      Misojos, which appeared in 1918 in Corre-Vuela. In 1920 he published poems in the magazine, Selva Austral, using the pen name Pablo Neruda to avoid conflict with his family, who disapproved his literary ambitions. From 1921 he studied French at the Instituto Pedagógico in Santiago. In 1924 Neruda gained international fame as an writer with VEINTE POEMAS DE AMOR Y UNA CANCÍON, which is his most widely read work.

At the age of only 23 Neruda was appointed by the Chilean government as consul to Burma (now Myanmar). He held diplomatic posts in various East Asian and European Countries, befriending among others, the Spanish poet Federico García Lorca. Neruda continued to write for several literary and other magazines, among them La Nación, El Sol, and Revista de Occidente. He also started to edit in 1935 a literary magazine, Caballo Verde para la Poesía.

After Neruda ended his affair with the possessive and violently jealous Josie Bliss, he married María Antonieta Hagenaar  in 1930, a Dutch woman who couldn't speak Spanish,  they separated in 1936. At that time Neruda lived in Paris, where he published with Nancy Cunard, the journal Los Poetas del Mundo Defiende al Pueblo Español. Nancy Cunard was the sole inheritor of the famous Cunard shipping company.  She later followed Neruda to Chile. In the 1930s and 1940s Neruda lived with the Argentine painter Delia del Carril, who encouraged Neruda to participate in politics. Neruda and Delia del Carril married in 1943, but the marriage was not recognized in Chile; they separated in 1955. Neruda married again in 1966 to the Chilean singer, Matilde Urrutia. She was the inspiration of much of Neruda's later poetry, among others One Hundred Love Sonnets (1960).

Neruda's, Residence on Earth (1933), was a visionary work, emerging from the birth of fascism. In 1935-36 he was in Spain but he resigned from his post because he sided with the Spanish Republicans. After the leftist candidate don Pedro Aguirre Cerda won the presidential election, Neruda again was appointed consul, this time to Paris, where he helped Spanish refugees by re-settling them in Chile.

In 1942 Neruda visited Cuba and read for the first time his poem, Canto de amor para Stalingrado, which praised the Red Army fighting in Stalingrad. His daughter, Malva Marina, died in the same year in Europe. Neruda joined the Communist Party, and in 1945 he was elected to the Chilean Senate. He attacked President González Videla in print and when the government was taken by right-wing extremists, he fled to Mexico. He traveled to the Soviet Union, where he was warmly received, and to other Eastern European countries. Neruda was especially impressed by the vastness of Russia: its birch forests, and rivers. He met Ilya Ehrenburg, whose home was full of works by Picasso; and the Turkish poet, Nazim Hikmet, who lived in exile in Moscow. The Soviet Union was for Neruda a country where libraries, universities, and theaters were open for all. He referred to dogmatic views in the Soviet art, but optimistically believed that the views had been condemned. Neruda's colleagues also read him Boris Pasternak's poems, but they did not forget to mention that Pasternak was considered as a political reactionary.

In exile Neruda produced CANTO GENERAL (1950), a monumental work of 340 poems. In this work Neruda examined Latin American history from a Marxist point of view, and showed his deep knowledge about the history, geography and politics of the continent. The central theme is the struggle for social justice. Canto general includes Neruda's famous poem Alturas de Macchu Picchu, which was born after he visited the Incan ruins of Macchu Picchu in 1943. In it Neruda aspires to become the voice of the dead people who once lived in the city.

While in exile, Neruda traveled in Italy, where he lived for a while. After the victory of the anti-Videla forces and the order to arrest leftist was rescinded, Neruda returned to Chile. In 1953 Neruda was awarded the Stalin Prize. He remained faithful to "el partido" when other intellectual had rejected Moscow's leash. However, Neruda's faith was deeply shaken in 1956 by Khrushchev's revelation at the Twentieth Party Congress of the crimes committed during the Stalin regime.His collection EXTRAVAGARIO (1958) reflects this change in his works. In it Neruda turned to his youth. He presents the reader with his daily life and examines critically his Marxist beliefs. During a visit to Buenos Aires in 1957 Neruda was arrested and spent a restless night in jail. Just before he was released, a policeman gave him a poem, devoted to the famous author.

Establishing a permanent home on the Isla Negra, Neruda continued to travel extensively, visiting Cuba in 1960 and the United States in 1966. When Salvador Allende was elected president, he appointed Neruda as Chile's ambassador to France (1970-72). Neruda died of leukemia in Santiago on 23 September in 1973. His death was probably accelerated by the murder of Allende and tragedies caused by Pinochet coup. After Neruda's death his homes in Valparaiso and Santioago were robbed.

Thanks to kirjasto.sci.fi for the extended biography.
Read more →
A Dog Has Died
A Lemon
Absence
Algunas Bestias
Always
And Because Love Battles
Bird
Brown And Agile Child
Canto Xii From The Heights Of Macchu Picchu
Castro Alves From Brazil


Cat's Dream
Chant To Bolivar
Clenched Soul
Come With Me, I Said, And No One Knew (VII)
Death Alone
Don'T Go Far Off
Drunk As Drunk On Turpentine
Enigma with Flower
Enigmas
Entrance Of The Rivers

I like you calm, as if you were absent
I Remember You As You Were
If You Forget Me
In My Sky At Twilight
In You The Earth
It’s good to feel you are close to me
La Muerta
La Reina (and translation)
Leaning Into The Afternoons
Leave Me A Place Underground
Lone Gentleman
Lost In The Forest
Love
Love
Love, We're Going Home Now
Lovely One
Luminous mind, bright devil
LXXXIV From: ‘Cien sonetos de amor’
Magellanic Penguin
Full title list →
Guestbook (8)