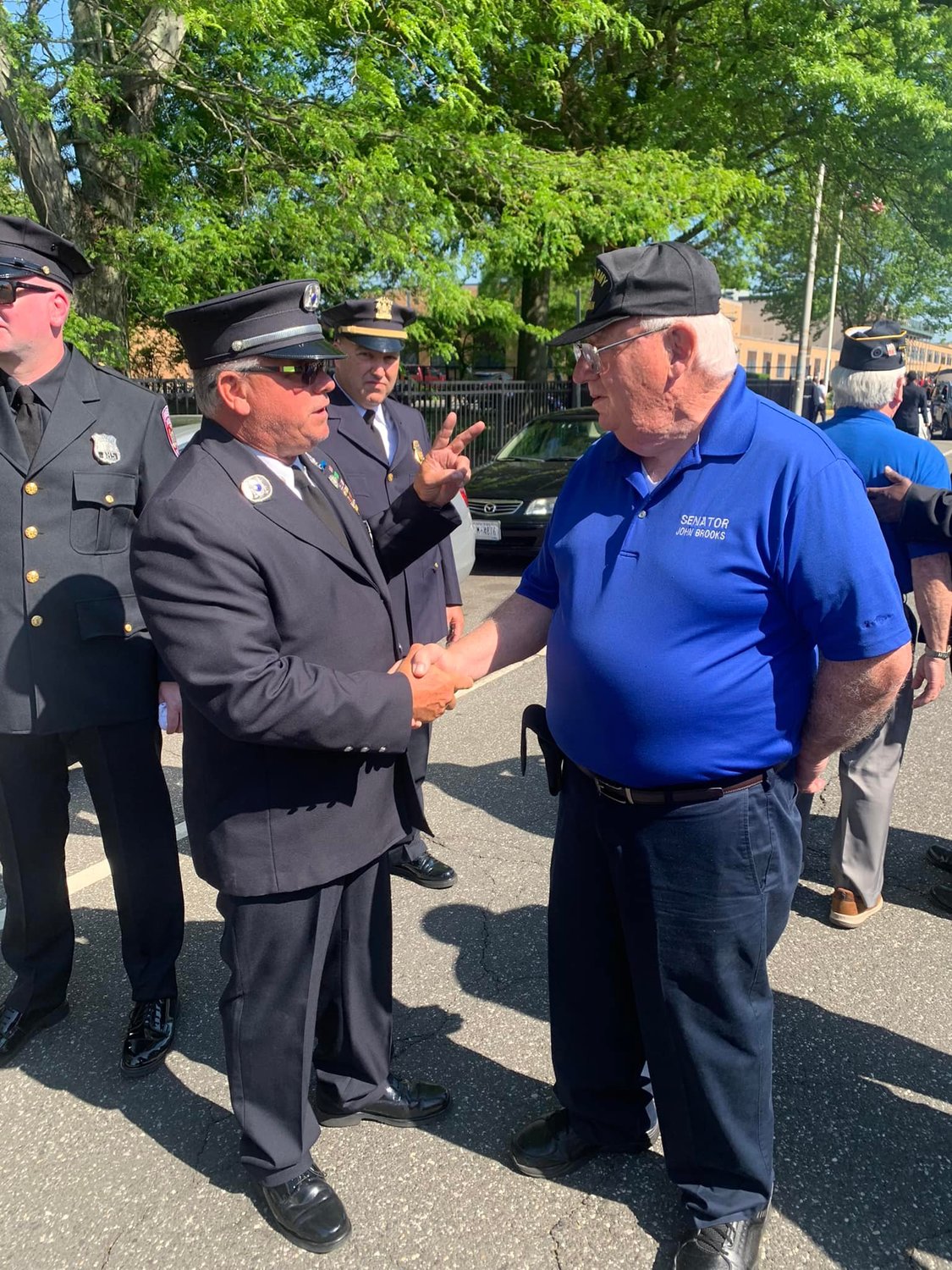 State Senator John E. Brooks greeted an official of the Freeport Fire Department on Memorial Day. Brooks has been state senator for District 8 since 2016, but under the redrawn district lines, will not run to fill the seat of the new District 5.
Deliah Roberts/Herald
By Reine Bethany

The combination press conference and campaign kickoff rally was held at the Hicksville Fire Department Station 3 in honor of the tens of thousands of firefighters that Brooks has supported during his tenure, as well as a demonstration of support to the new communities he is hoping to represent next year.

Brooks first won a senate seat in 2016, narrowly defeating John Venditto for Senate District 8. Among his other senate duties, he has served as chair of the Veterans, Homeland Security and Military Affairs Committee.

When recent redistricting lines removed communities that Brooks had represented for the past six years, he took a hard look at running again for office.

“The new district lines were a shock,” Brooks said in a published statement, “because they removed so many places I had worked so hard to represent. I took stock of what we had accomplished and felt it was the right time to retire rather than seek election in the new district.”

But the tragic mass shooting of 19 children and two schoolteachers in Uvalde, Texas, on May 24 changed his mind.

“After Tuesday’s tragic shooting in Texas,” Brooks’ statement continued, “I heard from so many people encouraging me to stay in this fight. The mother of a hero tragically lost in the Parkland shooting while saving student lives. Community leaders, labor unions, business groups, and so many of my constituents took their time to ask that I not bow out just yet. I am running for reelection because they have shown me there is too much left to do.”

At the campaign kickoff in Hicksville, Linda Beigel Schulman commended Brooks for his staunch support of gun safety legislation in the state senate. Schulman’s son, Scott Beigel, was one of the teachers killed by a mass shooter at Marjory Stoneman Douglas High School in Parkland, Florida, in 2017.

“John Brooks may look like a Teddy Bear, but don’t be fooled,” Beigel Schulman said. “John Brooks is a lion, and when it comes to fighting for what he believes in and what should be done, he gets it done.”

“I would go anywhere for this gentleman. He is the model for public service,” Bellone said. “When people heard that because of the craziness of these [redistricting] lines that John wasn’t going to seek reelection, there was overwhelming support. What he got to see in real time was the impact he’s had on people’s lives.”

State Senator Anna Kaplan (D-North Hills) touched on Brooks’ fight for bills to protect veterans and public servants, saying, “There has been no senator who fights harder for our veterans and our first responders than Senator John Brooks, and we need his voice in Albany to continue fighting for those who fight for us.”

Assemblywoman Judy Griffin (D-Rockville Center) expressed her appreciation for Brooks as a state legislature colleague. “As a family man, he understands just how important tax relief and securing our fair share of education funding are to the hard-working households of Nassau County,” Griffin said. “I look forward to continuing our work together as pragmatic lawmakers delivering for Long Island.”

Brooks summed up his intentions as he looks toward running to represent the new District 5.

“I will champion gun violence prevention to move us towards a world where we do not need to question if we will see our kids at night when we put them on the school bus in the morning,” Brooks said. “I will work to change how we fund public education to provide equitable opportunities for all and provide property tax relief for struggling families. I will fight to create good union jobs, pass environmental legislation to protect our coastal communities, and deliver every day to make our communities safer, affordable, and more prosperous places to live for all.”

The worldwide pandemic has threatened many of the businesses you rely on every day, but don’t let it take away your source for local news. Now more than ever, we need your help to ensure nothing but the best in hyperlocal community journalism comes straight to you. Consider supporting the Herald with a small donation. It can be a one-time, or a monthly contribution, to help ensure we’re here through this crisis. To donate or for more information, click here.

Other items that may interest you

Disco-themed gala for a very good cause