You have reached the cached page for https://www.britannica.com/biography/Jennifer-Saunders
Below is a snapshot of the Web page as it appeared on 10/24/2020 (the last time our crawler visited it). This is the version of the page that was used for ranking your search results. The page may have changed since we last cached it. To see what might have changed (without the highlights), go to the current page.
You searched for: Jennifer Saunders We have highlighted matching words that appear in the page below.
Bing is not responsible for the content of this page.
Jennifer Saunders | Biography, TV Shows, Movies, & Facts | Britannica
Jennifer Saunders
Article Media Additional Info

Britannica Quiz
Character Profile
From what planet is Spock?

Saunders attended London’s Central School of Speech and Drama with the intention of becoming a teacher. After graduation she saw an audition notice for the Comic Strip, a London comedy club. She and Dawn French had performed as a team in college, and they auditioned together. They were accepted, and the club proved an excellent training ground. French and Saunders went on to TV appearances in Comic Strip productions, the Girls on Top series, and several seasons of their own series, French and Saunders, as well as starring roles in the 1993 West End stage production Me & Mamie O’Rourke.

When French took a year off from performing, Saunders created Absolutely Fabulous, basing it on the French and Saunders sketch “Modern Mother and Daughter.” The show premiered in 1992 and was an instant hit. Known as Ab Fab to its fans, the over-the-top BBC production attracted a worldwide cult following by maintaining its sophistication while reveling in outrageous comments and behaviour that were decidedly not politically correct. The show featured the antics and misadventures of Edina (Saunders) and her best friend, Patsy (Joanna Lumley). Meanwhile, Edina’s disapproving daughter, Saffron (Julia Sawalha), was forced by necessity to take on the role of mothering her mother, as Edina concerned herself more with wearing designer-label clothing (though she wore them in ensembles the designers never intended) than with providing for the needs of her daughter. In 1995 Absolutely Fabulous, ostensibly having ended its run, premiered on American television. The show was revived in 2001, however, and ran until 2003. A number of specials followed, including one in 2012 set on the eve of the London Olympic Games. Absolutely Fabulous: The Movie was released in 2016.

In 2006 Saunders and French debuted Jam & Jerusalem (American title Clatterford), a comedy about a women’s group. The pair also starred in A Bucket o’ French and Saunders (2007). In 2007 Saunders starred as a talk show host in The Life and Times of Vivienne Vyle. She later voiced Miss Reason in the surreal comedy series This Is Jinsy (2010–11, 2014) and appeared as a prison warden in the show Dead Boss (2012). She also costarred with Timothy Spall in the P.G. Wodehouse-inspired Blandings (2013–14) and played a rare dramatic role in the eight-part thriller The Stranger (2020). 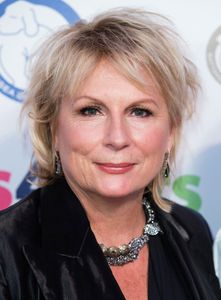