You have reached the cached page for https://disney.fandom.com/wiki/Jason_Lee
Below is a snapshot of the Web page as it appeared on 10/23/2020 (the last time our crawler visited it). This is the version of the page that was used for ranking your search results. The page may have changed since we last cached it. To see what might have changed (without the highlights), go to the current page.
You searched for: Jason Lee (actor) wikipedia We have highlighted matching words that appear in the page below.
Bing is not responsible for the content of this page.
Jason Lee | Disney Wiki | Fandom

With Beth Riesgraf:
Pilot Inspektor Lee
With Alkaç:
Casper Lee
Sonny Lee
Alberta Lee
Jason Michael Lee is an American actor, photographer, producer, and professional skateboarder well known for his distinctive dry, gravelly voice. He is best known for his roles as the titlular character on the NBC comedy series My Name Is Earl, Bones in Monster House, and Dave Seville in the live-action Alvin and the Chipmunks film series.

For Disney, he voiced Syndrome in the 2004 Disney/Pixar film, The Incredibles and in the video game Disney Infinity, as well as providing the voice of the titular superhero in the 2007 live-action film, Underdog. He also played Daniel Zavitz in Enemy of the State, Skip Skipperton in Mumford, Puggy in Big Trouble, PR Exec.1 in Jersey Girl, and Brodie Bruce/Banky Edwards in Jay and Silent Bob Strike Back.

Syndrome
(The Incredibles and Disney Infinity)

Underdog
(Underdog)
Add a photo to this gallery 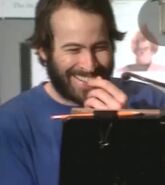 Jason Lee behind the scenes of The Incredibles.

Jason Lee at premiere of Underdog in July 2007. 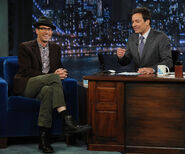 Jason Lee at premiere of Hallmark's Away and Back in January 2015.
Add a photo to this gallery
Retrieved from "https://disney.fandom.com/wiki/Jason_Lee?oldid=4240622"
Community content is available under CC-BY-SA unless otherwise noted.

Fandom may earn an affiliate commission on sales made from links on this page.

Fandom may earn an affiliate commission on sales made from links on this page.