You have reached the cached page for https://www.rottentomatoes.com/m/shanghai_noon
Below is a snapshot of the Web page as it appeared on 1/22/2021 (the last time our crawler visited it). This is the version of the page that was used for ranking your search results. The page may have changed since we last cached it. To see what might have changed (without the highlights), go to the current page.
You searched for: Is Shanghai Rotten Tomatoes? We have highlighted matching words that appear in the page below.
Bing is not responsible for the content of this page.
Shanghai Noon (2000) - Rotten Tomatoes
Home
Top Box Office
Tickets & Showtimes
DVD & Streaming
TV
News 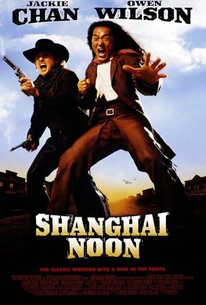 Although the plot is really nothing to brag about, Jackie Chan and Owen Wilson work well together. The cinematography looks great, and Jackie delivers a hilarious performance. This is an old-fashioned crowd-pleaser.

Bumbling Chon Wang (Jackie Chan) works as an Imperial guard in the Forbidden City of China. When Princess Pei Pei (Lucy Liu) is taken hostage, Wang pursues her captors to the wild frontier land of Nevada, where he meets good-natured thief and occasional cowboy Roy O'Bannon (Owen Wilson). Using O'Bannon's love of money, Wang convinces him to help recover the princess, and together the two form a curious partnership -- the likes of which the West has never seen.