You have reached the cached page for https://www.amazon.com/Spirit-Jeannie-Berlin/dp/B01DCG7N5I
Below is a snapshot of the Web page as it appeared on 1/4/2021 (the last time our crawler visited it). This is the version of the page that was used for ranking your search results. The page may have changed since we last cached it. To see what might have changed (without the highlights), go to the current page.
You searched for: In the Spirit movie We have highlighted matching words that appear in the page below.
Bing is not responsible for the content of this page.
Amazon.com: In The Spirit: Jeannie Berlin, Olympia Dukakis, Peter Falk, Melanie Griffith, Elaine May, Marlo Thomas, SANDRA SEACAT, JULIAN SCHLOSSBERG, BEVERLY IRBY, JEANNIE BERLIN, LAURIE JONES: Movies & TV 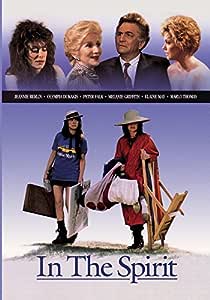 A terrific cast- Jeannie Berlin, Olympia Dukakis, Peter Falk, Melanie Griffith, Elaine May and Marlo Thomas headline the quirky comedy In The Spirit. When Marianne's (May) husband is fired from his job, she moves from Beverly Hills to a nightmarish New York City. She hires ditzy psychic Reva (Thomas) to redecorate her apartment, and they end up being pursued by a crazed killer. Fleeing the city, the two find themselves at a New Age retreat in upstate New York.

3.8 out of 5 stars
3.8 out of 5
47 global ratings
How are ratings calculated?
To calculate the overall star rating and percentage breakdown by star, we don’t use a simple average. Instead, our system considers things like how recent a review is and if the reviewer bought the item on Amazon. It also analyzes reviews to verify trustworthiness.
Top reviews

Alex H
1.0 out of 5 stars The Prime Stream CUTS OFF At 49-minutes. The MOVIE IS INCOMPLETE on PRIME!
Reviewed in the United States on October 4, 2016
Verified Purchase
The movie itself gets about 3-4 stars. It's about a quirky woman played by Marlo Thomas who is a new age spiritualist and another woman, Elaine May, who moves back to NYC and they live in the same apartment building. Another character played by Jeannie Berlin ends up dead and suddenly Thomas and May are involved in a mystery where someone is after them.

I looked this film up because I saw it in the 90s on TV, and I just happen to finish watching Woody Allen's just released limited series
Crisis in Six Scenes  that also featured Elaine May. After seeing "Crisis" I came to look up IN THE SPIRIT and was surprised to find it.

The reason I give it one-star is because this isn't the complete movie. It cuts off around the 49:08 mark just when the movie starts getting good! I don't know what happened?

Also, there are periods when the screen goes to black, probably where they would put the commercials in if it was televised, that last for about 25 seconds or so. No sound, no picture, but the time is still advancing (I thought the picture just stopped but it didn't).

So don't pay for it to watch as a streaming video. I have Prime and so it was free, but the movie needs to be restored so that it is a complete movie. I have sent a note to Amazon, but I don't know if they can fix it. According to IMDb the actual running time of the movie is 01h:34m.

Olympia Dukakis, Peter Falk, and Melanie Griffith also star in this movie. If you like movies like Jumpin' Jack Flash and Desperately Seeking Susan then you'll probably like IN THE SPIRIT.
Read more
7 people found this helpful
Helpful
Report abuse

m0zart
5.0 out of 5 stars Finally a DVD version of this cute and quirky film!
Reviewed in the United States on August 2, 2016
Verified Purchase
I first rented this movie back in 1990 after a high school class at a now defunct video store. Since that time, it has been one of my favorite oddball comedies, one that I've watched time and time again. Each time I've seen it has been on VHS, and I've owned several copies of the VHS over the years, almost all of which I've played until they don't play well anymore. I had waited patiently for a DVD or Bluray release, but it seemed that this film was tied up in micromanaged ownership somewhere and would never see light on a digital format. When Amazon offered the film for streaming rental a few years ago, I was excited and thought I would take a look, but then I read reviews that this film was cut heavily, and was thus missing a lot of the more adult humor. I decided to skip renting that one while still waiting for a possible future DVD release. When I saw this DVD version listed the other day here on Amazon, I was quick to order with expedited delivery, but thereafter I realized that this might be a heavily cut version as well, that it might have received the same treatment as the digital streaming release. I am glad to say that after viewing this film on DVD, that is not the case. It is the same film I grew to love all those years ago, with all of the rancid and xenophobic humor I once enjoyed. If you are like me and was looking for a DVD release of this film, then I suggest picking this one up while it's still available.
Read more
10 people found this helpful
Helpful
Report abuse

Gal 220
4.0 out of 5 stars AMAZON PRIME NOW HAS FULL VERSION
Reviewed in the United States on November 7, 2019
Verified Purchase
I had to come here and write this because I had avoided watching this for years while it sat in “My Stuff” for a couple of years based on all the reviews which stated that the Prime version was cut to less than an hour. I ran my cursor across it last night and noticed it reflected a 1 hour and 20 minute run time. I thought that maybe the info was incorrect and it was still cut to less than an hour so I cicked on it to watch it and ran my cursor down the bar at the bottom to the end and it was a full 1:20 minutes. That said, the profanity has been cut out of this version and a few of the funny one-liners but it is largley intact. As others have noted, the first half drags a bit but once the girls hit the road, it becomes hilarious. I will also agree that the director missed huge opportunities to make the movie funnier than it was by not cutting to Elaine May’s facial reactions to what Marlo Thomas was saying often enough. The ones she did manage to capture are the funniest parts of the whole movie. So funny, I found myself thinking “I wish I could see Elaine Mays face at that comment!” Marlo Thomas is perfect for this role!
Read more
One person found this helpful
Helpful
Report abuse

Re-master lover
3.0 out of 5 stars What's up with the 1.33:1 SHOUT FACTORY?
Reviewed in the United States on May 6, 2020
Verified Purchase
Truly, a very very funny movie. Great acting. Lots of laughs. Great cast. And baffling as to why it's taken so long to get a DVD release.
But really SHOUT FACTORY, a 1.33:1 print? Where's the usual integrity you give to releases under your banner?
No excuse for this not being released in it's correct original Aspect screen ratio AT ALL. ESPECIALLY from a company like you.
SHAME. (That old adage; "if you're going to do something, do it right or not at all...")

FIVE stars to the film. One Star for the DVD release.
Read more
Helpful
Report abuse

JayJay
5.0 out of 5 stars The DVD contains the full version of the movie
Reviewed in the United States on April 30, 2018
Verified Purchase
This is a totally obscure little movie that I’ve loved since I was a kid. The version streaming on Prime has been hacked to pieces and I would highly suggest avoiding it. Still, I decided to roll the dice and buy the DVD. I’m just writing this review to confirm the DVD contains the full and unedited version of the movie. So if you’re one of the five or so other people out there who love this movie, the DVD contains the version you remember.
Read more
4 people found this helpful
Helpful
Report abuse

.
5.0 out of 5 stars SUPER funny movie!
Reviewed in the United States on April 21, 2011
Verified Purchase
I saw this movie a long time ago when I used to own VHS tapes. I came across it by chance thinking if the movie is not well known it can't be too great. I was completely wrong since it was one of the funniest movies I've ever seen.

Marlo Thomas is an excellent actress and it's a pity this movie is not on DVD! I remember laughing very much at the unexpected twists between a prostitute, a spiritualist and a murderer. This movie is not at all typical and a rare find.

Again, pity this is not on DVD and will probably not survive past VHS. The one solitary person who gave this movie a one star definitely must have a horrible sense of humor!

PLEASE ISSUE THIS ON DVD! :D

UPDATE: This review was for the unedited version. I saw the edited version on Amazon online later and many funny parts are edited out due to not'sa great language and there is some dubbing over ruining the original unedited version of the movie, PITY!
Read more
7 people found this helpful
Helpful
Report abuse
See all reviews
Pages with related products. See and discover other items: marlo thomas movies, melanie griffith movies, Lights for Sad Treatments