You have reached the cached page for https://www.amazon.com/Michael-Nyman-String-Quartets-Nos-1-3/dp/B000V6OM5C
Below is a snapshot of the Web page as it appeared on 9/9/2020 (the last time our crawler visited it). This is the version of the page that was used for ranking your search results. The page may have changed since we last cached it. To see what might have changed (without the highlights), go to the current page.
You searched for: How many quartets does Michael Nyman have? We have highlighted matching words that appear in the page below.
Bing is not responsible for the content of this page.
Michael Nyman: String Quartets Nos.1-3 by Balanescu Quartet on Amazon Music - Amazon.com 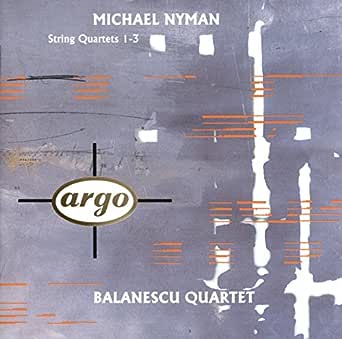 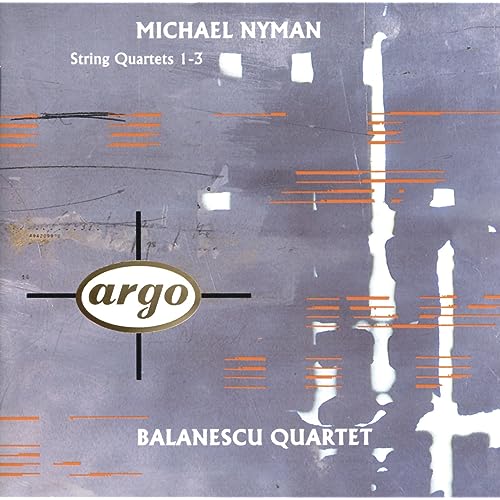 Listen Now
Buy MP3 Album $7.99
Your Amazon Music account is currently associated with a different marketplace. To enjoy Prime Music, go to Your Music Library and transfer your account to Amazon.com (US).

3.8 out of 5 stars
3.8 out of 5
7 global ratings
How are ratings calculated?
To calculate the overall star rating and percentage breakdown by star, we don’t use a simple average. Instead, our system considers things like how recent a review is and if the reviewer bought the item on Amazon. It also analyzes reviews to verify trustworthiness.
Top reviews

G.D.
2.0 out of 5 stars I can't conjure up much enthusiasm for this one
Reviewed in the United States on April 30, 2013
Verified Purchase
I have a hard time recommending this disc. Michael Nyman's music remains controversial, and is sometimes dismissed as the banal counterpart of Philip Glass (and Glass is himself occasionally dismissed as banal). I wish to emphasize that I have enjoyed much of what Nyman has done - though I admit that I have found his style to be particularly effective when accompanying film. I found less to admire in these three string quartets, though it isn't only the composer's fault.

The disc opens with the second quartet from 1988, which is based on melodic figurations and rhythmic elements of dance; it is full of energy and contrast and shifting rhythmic patterns and sounds, in fact, a bit more like Reich or Terry Riley than Glass, though subtlety is apparently not in Nyman's toolbox. None of the material is particularly memorable in itself, but there is an energy to the music that at least ensures that it avoids being boring. The performances are problematic, however - though the Balanescu quartet plays with plenty of energy, there is little nuance or variation, and virtually no dynamic range - I don't know whether the composer asked for fortissimo applied throughout, but that is pretty much what he gets. Intonation is also occasionally questionable, but it is not a huge problem in this work and gives at least the sixth movement the possibly appropriate atmosphere of a country dance performed by festive (overly festive) fiddlers for whom joy trumps precision.

In the third quartet the problems increase. The quartet was written in 1990 as a "transcription" of the composer's own choral work Out of the Ruins. It is darker in character than the other two works, and seems to try to express elegiac, passionate yearning. This is also where the thought of "poor man's Philip Glass" is hard to shake off - the gestures are to an extent similar, but Nyman lacks Glass's subtlety and range (and Glass is rarely particularly subtle). The performances fall completely apart, however. One inevitably wonders what the Kronos would do of this one - not that the Kronos has any kind of monopoly on performing this type of music, but the harsh, brutal, jarring and seemingly desperate and futile attempts from the Balanescus to cover all the notes do not make for a comfortable listening experience.

The first quartet dates from 1985 and is the longest of the three. It consists of twelve "figures" of approximately two minutes each; development is persistently avoid within each figure - nor is there much development over the course of the work, though the transitions between them are decidedly abrupt. It quotes various sources, including Schoenberg, Alex North and John Bull, but the result sounds exactly like a string quartet adaptation of the soundtrack to an early Nintendo computer game - diatonic and with simple polyphony, but incessant and with to little going on to count as "tonal". Yes, I see what Nyman is trying to do in linking, interlinking and deconstructing the differences between his disparate materials, but "clever" ideas have their merits determined largely by the results, and in this case the results are not particularly pleasant. Again, I don't know if it was the composer's intention, but the Balanescu plays everything fortissimo and as hard as possible.

They also receive a dry and close sound, which hardly helps. Though I can see that many reviewers and critics disagree with me, I found the contents of this disc mildly engaging at best and quite unpleasant at worst. Now, I always try to admit to myself that the reason I fail to see the qualities others apparently see might be that the problem is on me - that it is I who have failed to grasp something. But in this case I frankly find that rather hard to believe.

Darryl K. Clark
5.0 out of 5 stars all hail nyman
Reviewed in the United States on April 21, 2007
Verified Purchase
michael nyman came in to the music world spotlight when the 1993 film the piano, which featured his score, became a worldwide hit. many a wedding ceremony was graced with the lovely, haunting piano pieces and i even used the music as part of my mother's memorial service.

although many of his other film scores, especially carrington, lend themselves to emotional states, his chamber music is, in contrast, delightfully astringent yet as lyrical at the film scores.

the second quartet is based on indian dance rhythms and is spiky and funky as it can possibly be within the realm of classical music. it's crying to be choreographed and already has. one more dance won't hurt--but mark, bill t, karola, pina, back off. this is mine!

the third quartet uses themes from the score of carrington and is a rich, romantic contrast to the two quartets it sits between--i love to love it and listen to it repeatedly.

the first quartet has the spirit of 1960s pop music--it's a beatles-style love-in played to perfection by the balanescu quartet.
Read more
6 people found this helpful
Helpful
Comment Report abuse

Discophage
4.0 out of 5 stars "distinctly apart from [Nyman's] other works": maybe that's why I enjoyed the three String Quartets
Reviewed in the United States on April 2, 2015
For the little I knew of it, I didn't particularly like the music of Michael Nyman before buying this disc. It's not the repetition I minded, it's the saccharine harmonies, the music all-too conspicuously pulling on the sentimental strings, the impression of hearing a sub-par derivation of Phil Glass when Glass is a sub-par derivation of himself. And that's also why I knew fairly little of the music of Nyman: no incentive to try more.

But I wanted to complete my collection of CDs from Argo, a sub-label that Decca established in the 1990s, and I've enjoyed the three String Quartets. The music is upbeat, syncopated, dance-like, exciting, unfolding tremendous rhythmic vitality (especially in the Second SQ, the most typically repetitive of the three) and tension-filled in sheer doggedness of its repetitive processes, even irresistibly jubilant and coruscating in many sections of the First String Quartet (written in 1985 for the Arditti Quartet - the other two are from 1988 and 1990, both for the Balanescu Quartet). That the first SQ is based on John Bull's Variations on the popular song Walsingham and a fragment from Schoenberg's second String Quartet is of no importance: you don't need to recognize these borrowings to enjoy this richly inventive and contrasted piece. Assuredly, the music is, at times, pretty and sentimental (third movement of 2nd quartet, short section F of the First SQ, track 14, Quartet No. 3 in general) but not mawkishly so, sometimes sweepingly to plangently lyrical and romantic. String Quartet No. 3 in particular, a long mourning dirge written after a choral work that Nyman had composed in the aftermath of the earthquake that had destroyed Armenia in 1988, is the one that fits most my expectations about the sentimental Nyman, but it also has the rent lyricism of the quartets of Janacek. It may be not much more advanced in its language than those of the Moravian composer, but it's also sonically inventive at times, as in the whistle-like harmonics at the beginning of track 8. Some time after first listening to this CD I purchased the scores of the second and third quartets, and I can testify that under their appealing and easy-listening guise, they present serious rhythmic challenges for the performers, as in the Second Quartet with its different irregular rhythms on each stave.

In the invaluable liner notes by Nyman himself, the composer says that "a consistency of compositional approach" in the quartets is what "unifies them and sets them distinctly apart from [his] other works". Maybe that's why I enjoyed them. They are typical of the kind of music in which the Kronos Quartet and the Balanescu Quartet seem(ed) to revel in, and should please all the admirers of those two ensembles. I later bought the alternative version of Quartets 2 & 3 by the Lyric Quartet on Black Box,  Nyman: String Quartets 2, 3 & 4 . The two versions are very similar, there is no clear-cut superiority of one over the other, but given the Balanescu's Quartet long association with Nyman and the fact that they premiered the Second and Third Quartets, and also because the Lyric Quartet doesn't play the Fourth Quartet complete, the Argo disc is to be preferred, and may be complemented with the complete recording of the 4th SQ by the Camilli Quartet,  British Composers: Nyman - String Quartet 4 .

TT 63:19. The recording was reissued in 2002 by Decca in its British Music Collection,  String Quartets Nos. 1 - 4 (Balanescu Quartet)  (no, the entry's title is false, it's 1-3), and again in 2013 by Nyman's own label, MN 124,  Nyman: String Quartets Nos.1-3 . Amazon has again sowed confusion by linking those two entries, so that my review originally posted under the 2013 reissue and pertaining specificially to it also appears under the previous Decca reissue.
Read more
One person found this helpful
Helpful
Comment Report abuse
See all reviews

Del
5.0 out of 5 stars Nyman "live"
Reviewed in the United Kingdom on April 20, 2012
Verified Purchase
I have put that title because most of Nyman's music is only available on recordings by The Michael Nyman Band with a production such that it sounds like it is being played on a cheap synthesiser rather than by live instruments and much as I love the music I can usually only stand to listen to a couple of tracks before my ears feel like they are blocked from too fast a decent in a plane, or like I have a heavy cold and I just have to turn it off.

It is a joy to hear with clarity the wonderful subtle progressions in this at simultaneously life-affirming, joyous and profoundly sad music.
Read more
One person found this helpful
Helpful
Sending feedback...
Thank you for your feedback.
Sorry, we failed to record your vote. Please try again
Report abuse
See all reviews