You have reached the cached page for https://www.howtogeek.com/318012/how-to-reverse-look-up-a-phone-number/
Below is a snapshot of the Web page as it appeared on 11/26/2020 (the last time our crawler visited it). This is the version of the page that was used for ranking your search results. The page may have changed since we last cached it. To see what might have changed (without the highlights), go to the current page.
You searched for: How do you identify a phone number? We have highlighted matching words that appear in the page below.
Bing is not responsible for the content of this page.
How to Reverse Look Up a Phone Number Skip to content
X
Popular Searches
X

Join 350,000 subscribers and get a daily digest of news, geek trivia, and our feature articles.

You get a call from a phone number you don’t recognize. There’s a good chance it’s just a scammer, but it could also be a legitimate business or a person you know. Rather than answering the phone or calling the number back, there are a few quick ways you can identify just who it was who tried to call you.

RELATED: PSA: If a Company Is Calling You Unsolicited, It's Probably a Scam

Google—or another search engine, like Bing if that’s what you’re into—is the first place you should turn when you see you’ve been called from an unfamiliar phone number. Just plug that number into Google or your search engine of choice. You can type the number in either the form “555-555-5555” or 5555555555 and you should see similar results.

If the number is a home landline phone number someone has registered through the traditional phone book system—in other words, if it would appear in a paper phone book (remember those?)—there’s a decent chance you’ll see that person’s name in the search results, too. If the phone number is used by a scammer, however, you’ll likely see links to websites like whocalled.us, 800notes.com, and whocallsme.com. You can also visit these websites directly and plug in a phone number, if you like—but they’ll usually appear when you perform a normal Google search for a phone number associated with scams.

RELATED: How to Block Robocalls and Telemarketers

These websites allow users to comment, and people often leave comments about their experiences. Skim through them and, if the phone number has been calling a lot of people with a similar scam, you’ll get an idea that the number is associated with a scammer. You can block these scammers from calling you in the future, too.

Take the comments with a grain of salt and be sure to double-check whether it’s a real phone number associated with a legitimate business, if you think it might be. 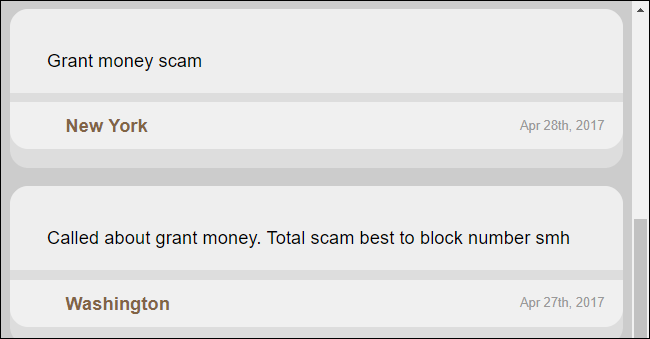 Not everyone knows this, but Facebook is actually an excellent way to perform a reverse lookup of phone numbers. Google usually won’t help you if you’re trying to find a phone number associated with an individual, but Facebook often will. You don’t even need to be Facebook friends with the person whose phone number this is.

This won’t always work, as some people have disabled this feature and other people don’t use Facebook at all. But it will work a surprising amount of the time. If you see a “We couldn’t find anything for [number]” message, that number is either not associated with a Facebook profile or the person has disabled the lookup feature for their account. But really, it’s amazing how often this works—and it will work even when you can’t find the person associated with a phone number in any other way.

Websites like whitepages.com can provide some additional information about a phone number. They’ll be able to associate a phone number with a person’s name and address if that information is available in the phone book—which it won’t be, for most phone numbers.

However, they’ll also be able to show you the geographical location where the phone number is registered, whether it’s a landline or a cell phone, and the phone company associated with the phone number. This information can give you some idea of who may be using a phone number.

This type of information is freely available on many different websites. Websites like these often ask for additional payment to try to find more information about a phone number—even the White Pages website does this—but we haven’t used these services and can’t vouch for them. We’d recommend sticking to the freely available information.

If you still can’t identify who tried to call you, you may want to try calling them back or just forget about it. They’ll probably call you back if it’s important.

The above article may contain affiliate links, which help support How-To Geek.
How-To Geek is where you turn when you want experts to explain technology. Since we launched in 2006, our articles have been read more than 1 billion times. Want to know more?

Join 350,000 subscribers and get a daily digest of news, comics, trivia, reviews, and more.