You have reached the cached page for https://www.amazon.com/Higher-Ground-John-Denver/dp/B001KEHAGC
Below is a snapshot of the Web page as it appeared on 1/11/2021 (the last time our crawler visited it). This is the version of the page that was used for ranking your search results. The page may have changed since we last cached it. To see what might have changed (without the highlights), go to the current page.
You searched for: Higher Ground movie We have highlighted matching words that appear in the page below.
Bing is not responsible for the content of this page.
Amazon.com: Higher Ground: John Denver, Paul Batten, Gary Chalk, Garry Davey, John Rhys-Davies, Martin Kove, Richard Masur, Gordon Tootoosis, Matthew Walker, Meg Wittner, Richard Leiterman, Lee Holdridge, Robert Day, David G. Blangsted: Movies & TV 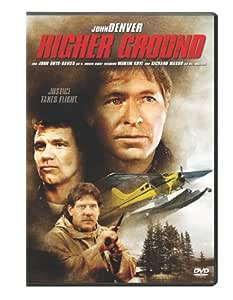 Set against the awesome backdrop of the Alaskan wilderness, a disillusioned FBI agent decides to retire and join his buddy running an air frieght business. When his friend is murdered and unjustly branded a bootlegger, the former agent sets out to clear his friend's name.

Singer-songwriter John Denver sought to reboot his career and carve out a new role for himself as an action hero with Higher Ground. This TV movie, clearly intended as a pilot for a possible series, stars Denver as former FBI agent Jim Clayton, who goes to Alaska when the incompetence of his superiors at the bureau becomes unbearable. In the vast wilderness, he teams up with an old friend named Rick, who has an air freight business. But Rick soon turns up dead and it's up to Jim to clear his friend's name of bootlegging charges and bring peace to Rick's wife and son. Along the way, of course, there's an occasion for Denver to pull out his guitar and exercise his soaring tenor. The plot and overall quality is standard television fare of the 1980s: The bad guys are obviously bad, a young boy needs to regain his faith in humanity, and solving the case doesn't involve detective work so much as looking earnest and getting into awkwardly choreographed fist fights. Still, Denver's sincere and likable personality comes through and fans will enjoy his performance. Also starring John Rhys-Davies (Raiders of the Lost Ark, the Lord of the Rings trilogy) and Richard Masur (Risky Business). --Bret Fetzer

4.6 out of 5 stars
4.6 out of 5
105 global ratings
How are ratings calculated?
To calculate the overall star rating and percentage breakdown by star, we don’t use a simple average. Instead, our system considers things like how recent a review is and if the reviewer bought the item on Amazon. It also analyzes reviews to verify trustworthiness.
Top reviews

Nora L. Forth
5.0 out of 5 stars Fabulous...
Reviewed in the United States on October 27, 2018
Verified Purchase
I do so miss John Denver... I grew up in Colorado and heard him a lot. Sometimes life just isn't fair...
Read more
7 people found this helpful
Helpful
Report abuse

Brenda M.
4.0 out of 5 stars Only bought this to see John Denver!!
Reviewed in the United States on December 29, 2016
Verified Purchase
The plot was decent. The scenery was beautiful Alaska & you get to see John flying an airplane. The acting was not great, but I only bought this to see John Denver alive!! He does sing a song also. Miss him so badly--can't believe it's almost 20 years since he passed........
Read more
12 people found this helpful
Helpful
Report abuse

Zach
4.0 out of 5 stars John Denver Fans Will Love This One
Reviewed in the United States on August 5, 2009
Verified Purchase
I bought this dvd partly because i'm a big John Denver fan & partly because the reviews of it here on Amazon were overwhelmingly good. I unfortunately missed it back in 1988 when it was on tv but I am really glad I took a chance & bought it cuz it's one of Denver's best movies. It's also a real treat to see him playing a former FBI agent in the wilds of Alaska who while investigating the murder of his best friend & partner (Martin Kove), gets to fly around in cool seaplanes as part of the shipping business that he's working in. His investigation rubs a few locals & the sherriff (John Rys-Davies) the wrong way at first but they quickly start to see that his character is smart, tenacious & not someone to be taken lightly. Along with the good story there is teriffic scenery & a good cast as well. You even get to see John sing & play guitar during a party scene. The highlight of this film isn't the music, story or gorgeous scenery though. It's actually getting to see John do the thing he loved to do the most when he wasn't entertaining all us lucky fans, and that was flying airplanes. Obviously there is a bittersweet quality to this but it's still great to see John having a great time & know all the while, that at the very least, he died doing the thing he most loves to do.
Read more
23 people found this helpful
Helpful
Report abuse

Kathryn Lambert
5.0 out of 5 stars If you are a JD fan
Reviewed in the United States on October 10, 2016
Verified Purchase
Well, ok, I gave this movie 5 stars because there is nothing that John Denver does that I do not love BUT. .. some of the acting is kinda bad (from all characters) but I still found it entertaining. I wouldn't be embarrassed to have my mother watching this movie with me and my grand children. No sex or profanity.
Read more
7 people found this helpful
Helpful
Report abuse

Julie Kay Smithson
5.0 out of 5 stars John Denver Acting At Something He Loved!
Reviewed in the United States on August 16, 2016
Verified Purchase
I loved this movie, a "pilot film" for a television series starring John Denver. The TV series didn't happen, but we still have this movie to show us how much John loved planes, flying, and rural places of great beauty. The plot is so-so, but that's all right, because it's another view of John Denver that many haven't seen.
Read more
7 people found this helpful
Helpful
Report abuse

Amazon Customer
5.0 out of 5 stars Great Movie!
Reviewed in the United States on April 7, 2015
Verified Purchase
I Love this movie one of John Denver's Best Acting Roles, This was supposed to be a pilot for a new TV Show but it did not make the cut very surprisingly because this is a great movie I thought. Other Movies with John Denver to check out are Foxfire, Walking Thunder, and Oh, God!
Read more
9 people found this helpful
Helpful
Report abuse

DWY3K
3.0 out of 5 stars Not as good as I remembered...
Reviewed in the United States on November 13, 2013
Verified Purchase
DVD arrived in excellent condition as advertised. Packaging was a
simple thin bubble wrap envelope but DVD was unharmed. Movie
was about what I remember from years ago but not quite as good
as I remember. It was definitely a simple made for TV movie. The
acting was okay, but seemed a little forced. It would have been
better to rent it, not buy it.

michael john madine
5.0 out of 5 stars John Denver in a great Movie
Reviewed in the United Kingdom on November 20, 2013
Verified Purchase
This is a good movie,filmed spectacularly in Alaska,with some great flying sequences performed by Denver himself. Incidentally,does anybody out there know that John Denvers father was a member of the crew of the Convair B58 Hustler supersonic bomber which captured,and still holds the official World Land Speed record as far as i know,from the States to Paris,back in the sixties.Father and son were both born to fly,although Denvers death in a crash was,sadly,a result of pilot error. SAnyway,the plot in the film is great,the ending works out satisfactorily,and on the technical side,the quality of the dvd,and its packaging and delivery,were all perfect. Buy with confidence,this is a good sunday afternoons viewing for the family!
Read more
Report abuse

michk332
1.0 out of 5 stars AVOID: dvd only plays in USA
Reviewed in the United Kingdom on July 21, 2017
Verified Purchase
Avoid this dvd. It does not play in UK.
To return the dvd purchasers have to pay return postage to USA. The advert should be removed.
It probably breaks UK law as purchasers have no postage paid return option
Read more
Report abuse

By George
5.0 out of 5 stars Five Stars
Reviewed in Canada on May 24, 2017
Verified Purchase
no scratches and played great. Very happy with the order!
Read more
One person found this helpful
Report abuse

Christine Moon
5.0 out of 5 stars John Denver in Alaska, the land that he loved
Reviewed in the United Kingdom on March 4, 2009
Verified Purchase
John Denver plays a disillusioned FBI agent who ups sticks and moves to Alaska, where he flies float planes with an old friend.
The movie was a pilot (excuse the pun!) for a TV series that unfortunately was never made. I know John must have enjoyed filming it, as he loved flying and Alaska very much.
Read more
One person found this helpful
Report abuse

Susan nolan
1.0 out of 5 stars One Star
Reviewed in the United Kingdom on July 5, 2014
Verified Purchase
I can't view it says not right region?
Read more
Report abuse
See all reviews

Page 1 of 1 Start overPage 1 of 1
This shopping feature will continue to load items when the Enter key is pressed. In order to navigate out of this carousel please use your heading shortcut key to navigate to the next or previous heading.
Back
Next
Pages with related products. See and discover other items: superhero dvd, dubbed martial arts movies