You have reached the cached page for https://www.rottentomatoes.com/m/1007538_flesh_and_blood
Below is a snapshot of the Web page as it appeared on 4/2/2021 (the last time our crawler visited it). This is the version of the page that was used for ranking your search results. The page may have changed since we last cached it. To see what might have changed (without the highlights), go to the current page.
You searched for: Flesh and Blood movie We have highlighted matching words that appear in the page below.
Bing is not responsible for the content of this page.
Flesh & Blood (1985) - Rotten Tomatoes
Home
Top Box Office
Tickets & Showtimes
DVD & Streaming
TV
News 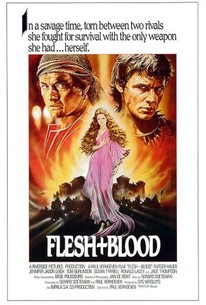 After being hired for an aborted coup, a group of unscrupulous warriors is abruptly disbanded. One of the mercenaries, Martin (Rutger Hauer), is determined to get revenge on his dismissive employer, Arnolfini (Fernando Hillbeck). To carry out his plan, Martin abducts the lovely Agnes (Jennifer Jason Leigh), the intended wife of Arnolfini's son, Steven (Tom Burlinson). Soon Martin and Steven are locked in an ongoing battle to see who will ultimately win the hand of Agnes.

Flesh & Blood (Flesh+Blood) (The Rose and the Sword) Quotes