You have reached the cached page for https://fallout.fandom.com/wiki/Fat_Man
Below is a snapshot of the Web page as it appeared on 12/8/2021 (the last time our crawler visited it). This is the version of the page that was used for ranking your search results. The page may have changed since we last cached it. To see what might have changed (without the highlights), go to the current page.
Bing is not responsible for the content of this page.
Fat Man | Fallout Wiki | Fandom
Fallout Wiki
Register
Don't have an account?
Sign In
Advertisement
in: Overview pages, Weapons, United States Armed Forces technology
English

“The Fat Man is perhaps the most devastating infantry weapon ever unleashed upon the modern battlefield - a hand-held catapult that launches portable nuclear bombs.”— Fallout 4 loading screens

The M42 Fat Man was developed at Fort Strong near Boston, Massachusetts. Development began in February 2076, with the goal being the development of a man-portable tactical nuclear launcher easy enough for use by troops on the ground, to destroy reinforced and entrenched positions.[2][3] Problems manifested instantly, as warheads were simply too heavy to clear the blast radius fast enough to provide safety for the operator. Even stripping them to the minimal possible size failed to produce an acceptable effect. Instead, the development team decided to increase the power of the launcher unit, even considering using railgun technology to accelerate the warhead. The notion was largely academic, as it would require for the overburdened soldier to carry an additional power pack the size of a suitcase and turn the Fat Man into a crew-served weapon.[4] Concurrent development ran on the MIRV version of the launcher. Live-fire testing claimed lives, in fact, with two soldiers killed during a test. No remains were recovered and the commanding officer in charge of the project, General Brock, covered up the incident, ordering his subordinates to send sand packed in an urn to their relatives.[5]

The project hit a breakthrough in December 2076,[6] when the project lead discovered a solution for the launcher problems. Six hours, fourteen cups, and one concerned night shift lab crew later, the future M42 launcher was conceptualized: Based on the spigot mortar mechanism, the launcher would only have to accommodate a firing through and system, relying on mechanical launching, rather than chemical or electrical means. The Fat Man warhead would be propelled by a sub-charge embedded inside the warhead, "catapulting" the warhead through the air to the target - giving plenty of range with the added bonus of not producing a smoke trail that could reveal the firing team to the enemy.[7]

By September 2077,[8] after one hundred test firings the weapon were complete and ready to be shipped to units overseas. A large number of units was manufactured and shipped together with the appropriate warheads to select locations throughout the United States.[9]

The weapon quickly entered the general publics imagination, with television advertisements, magazine issues and more telling the American people about their government's latest weapon in the fight against communist China.[10][11]

The M42 Fat Man is an effective area of effect weapon, allowing a person to bombard a large area with good precision and deadly force. It uses a mini nuke for ammunition which when fired, results in a small nuclear blast.

Named for the Multiple Independent Re-entry Vehicles (MIRV) intercontinental ballistic missile payload, two distinct variants of the experimental MIRV exist. The first is a prototype that was delivered to the National Guard depot in Washington, D.C. which fires 8 individual mini nukes at once. The second is a modified version of the standard launcher in the Commonwealth and Appalachia, which splits a single mini nuke into six independent projectiles.

Esther is a unique Fat Man with a different firing mechanism, a blast shield, a light-blue body, and a thick glass or plastic bed holding the mini nukes. It weighs 10 pounds more than a standard Fat Man, but does not jam, and is more powerful.

The Striker was made by the employees of Beaver Creek Lanes for Thomas Davis, a former league champion that became handicapped after a battle injury. The Striker was meant to serve as a tool for Davis to launch bowling balls even though he had lost use his legs. It doesn't launch nukes but modified bowling balls.

This unique Fat Man was hidden by John-Caleb Bradberton, the inventor of Nuka-Cola in Nuka-World. Created as part of Project Cobalt, instead of regular mini nukes it launches Nuka-nukes, a specially modified, quantum-enhanced version with increased explosive power. 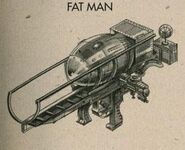 Slide from Prepare for the Future promotional video

Fallout 3 - Jimmy and the Fat Man