You have reached the cached page for https://www.amazon.com/Fatal-Deception-Mrs-Harvey-Oswald/dp/B00FUABGV2
Below is a snapshot of the Web page as it appeared on 1/1/2021 (the last time our crawler visited it). This is the version of the page that was used for ranking your search results. The page may have changed since we last cached it. To see what might have changed (without the highlights), go to the current page.
You searched for: Fatal Deception: Mrs. Lee Harvey Oswald movie We have highlighted matching words that appear in the page below.
Bing is not responsible for the content of this page.
Amazon.com: Fatal Deception: Mrs. Lee Harvey Oswald: Helena Bonham Carter, Robert Picardo, Frank Whaley: Movies & TV 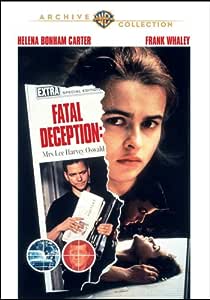 Helena Bonham Carter gives a Golden Globe® -nominated performance as the widow of Lee Harvey Oswald in this compelling story about conspiracies and cover-ups costarring Frank Whaley as the accused assassin. Thrust into the national consciousness on November 22, 1963, Marina Oswald (Bonham Carter) was a 22-year-old Russian mother of two who could barely speak English. Beginning with their courtship in Minsk, Marina's story is told for the first time: her husband's secretive life, the move to Dallas-Fort Worth, the pain and horror of the assassination, the raising of her children, and how she gradually came to side with conspiracy theorists that the truth still remains hidden. Filmed on location in Dallas and Russia, Fatal Deception: Mrs. Lee Harvey Oswald aired on NBC-TV on November 15, 1993, revealing secrets - both her husband's and her own - that Marina kept for 30 years.

3.8 out of 5 stars
3.8 out of 5
13 global ratings
How are ratings calculated?
To calculate the overall star rating and percentage breakdown by star, we don’t use a simple average. Instead, our system considers things like how recent a review is and if the reviewer bought the item on Amazon. It also analyzes reviews to verify trustworthiness.
Top reviews

CMM
3.0 out of 5 stars Tough Russian
Reviewed in the United States on November 22, 2015
Verified Purchase
I didn't do any research on this movie, but if let me experience what life must have be for a woman
living on the outside and then not letting this tragedy ruin her life and her daughters.

Sarah Tebbs
2.0 out of 5 stars Movie scenes out of sequence?
Reviewed in the United States on July 25, 2019
Verified Purchase
I love this movie, but it was like they were showing the movie backwards, compared to when they showed it on TV.
Read more
Helpful
Report abuse

Consumer38
5.0 out of 5 stars The Story of Mrs. Lee Harvey Oswald
Reviewed in the United States on January 12, 2014
Verified Purchase
As much as there is a lot of specualtion about the murder of President Kennedy , and his murderer ( Mr. Lee Harvey Oswald) , this motion picture is strongly providing the another point of view. The perspective of Mrs. Lee Harvey Oswald , and her daughters.
It needs a very very experienced actor , or a young and immense talented Impersonator - such as Helena Bonham Carter , to give us Mrs. Lee Harvey Oswald. Helena Bonham Carter shows clearly , what an attentive Specatator could sense before - that she always was more than just a pretty young lady , and best corset queen in the victorian age. Her ongoing ambitions of playing complicated caracters is proofed here to be absolutely coorect. And of course one should never forget , that neither mrs. Owald nor her Daughters woudl have choosen to get involved into public attention in that way.Great Story, great casting and again a necessary view on this tragic happening, .
Read more
One person found this helpful
Helpful
Report abuse

Hogan_62
5.0 out of 5 stars Fatal Deception: Mrs. Lee Harvey Oswald
Reviewed in the United States on March 17, 2015
Verified Purchase
I REMEMBERED WATCHING THIS MOVIE A LONG TIME AGO. I ALWAYS WANTED THIS MOVIE. IT IS GREAT. THANK YOU VERY MUCH.
Read more
Helpful
Report abuse

Jackroma
5.0 out of 5 stars A DIFFERENT SPIN ON THE KENNEDY ASSASSINATION
Reviewed in the United States on January 18, 2014
Verified Purchase
I have been looking for this film for years having seen it once on tv. It's the events of the Kennedy Assassination from a whole different perspective.
Read more
One person found this helpful
Helpful
Report abuse

Molly
4.0 out of 5 stars Marina Oswald and her life with Lee Harvey Oswald~4 stars~ Helena Bonham Carter is excellent~
Reviewed in the United States on September 9, 2017
plot: Marina Oswald's life and side of the Assignation of President Kennedy.

This is a docudrama. Lee Harvey Oswald was in the marines and started reading Marx and is fast turning pro communism. He ends up in the Soviet Union and gives up his American Citizenship and his passport. the KGB assigns him a job in Minsk in a radio factor where he meets Pharmacist Marina. (HELENA BONHAM CARTER). They marry and soon with Marina pregnant Oswald comes back to America with her. This shows Marina as a lovely young girl who spoke little English who ends up living with a teacher who spoke some Russian. Oswald is unstable, controlling, domineering and focuses on his own desires to kill someone important. The focus on this one is Marina and how she lived before and after Oswald and the strain on her two daughters from Oswald. It shows the FBI as bullies Marina who grows as she matures and learns better english. Bonham Carter is excellent as the beautiful and sometimes sad figure of Marina and the story she has to tell. Interesting and entertaining. Very good look into at a very *unstable* Oswald and his drive to kill. I give it 4 stars~
Read more
One person found this helpful
Helpful
Report abuse
See all reviews