You have reached the cached page for https://www.rogerebert.com/reviews/eternal-sunshine-of-the-spotless-mind-2004
Below is a snapshot of the Web page as it appeared on 10/22/2020 (the last time our crawler visited it). This is the version of the page that was used for ranking your search results. The page may have changed since we last cached it. To see what might have changed (without the highlights), go to the current page.
You searched for: Eternal Sunshine of the Spotless Mind We have highlighted matching words that appear in the page below.
Bing is not responsible for the content of this page.
Eternal Sunshine of the Spotless Mind movie review (2004) | Roger Ebert
Reviews

Eternal Sunshine of the Spotless Mind

How happy is the blameless vestal's lot! The world forgetting, by the world forgot. Eternal sunshine of the spotless mind! Each pray'r accepted, and each wish resign'd. -- Alexander Pope, "Eloisa to Abelard"

It's one thing to wash that man right outta your hair, and another to erase him from your mind. "Eternal Sunshine of the Spotless Mind" imagines a scientific procedure that can obliterate whole fields of memory -- so that, for example, Clementine can forget that she ever met Joel, let alone fell in love with him. "Is there any danger of brain damage?" the inventor of the process is asked. "Well," he allows, in his most kindly voice, "technically speaking, the procedure is brain damage."

The movie is a labyrinth created by the screenwriter Charlie Kaufman, whose "Being John Malkovich" and "Adaptation" were neorealism compared to this. Jim Carrey and Kate Winslet play Joel and Clementine, in a movie that sometimes feels like an endless series of aborted Meet Cutes. That they lose their minds while all about them are keeping theirs is a tribute to their skill; they center their characters so that we can actually care about them even when they're constantly losing track of their own lives. ("My journal," Joel observes oddly, "is ... just blank.")

The movie is a radical example of Maze Cinema, that style in which the story coils back upon itself, redefining everything and then throwing it up in the air and redefining it again. To reconstruct it in chronological order would be cheating, but I will cheat: At some point before the technical beginning of the movie, Joel and Clementine were in love, and their affair ended badly, and Clementine went to Dr. Howard Mierzwiak (Tom Wilkinson) at Lacuna Inc., to have Joel erased from her mind.

Discovering this, Joel in revenge applies to have his memories of her erased. But the funny thing about love is, it can survive the circumstances of its ending; we remember good times better than bad ones, and Joel decides in mid-process that maybe he would like to remember Clementine after all. He tries to squirrel away some of his memories in hidden corners of his mind, but the process is implacable.

If you think this makes the movie sound penetrable, you have no idea. As the movie opens, Joel is seized with an inexplicable compulsion to ditch work and take the train to Montauk, and on the train he meets Clementine. For all they know they have never seen each other before, but somehow there's a connection, a distant shadow of deja vu. During the course of the film, which moves freely, dizzyingly, forward and backward in time, they will each experience fragmentary versions of relationships they had, might have had, or might be having.

Meanwhile, back at the Lacuna head office, there are more complications.

Lacuna (www.lacunainc.com) seems to be a prosperous and growing firm (it advertises a Valentine's Day Special), but in reality, it consists only of the avuncular Dr. Mierzwiak and his team of assistants: Stan (Mark Ruffalo), Patrick (Elijah Wood) and Mary (Kirsten Dunst). There are innumerable complications involving them, which I will not describe because it would not only be unfair to reveal the plot but probably impossible.

"Eternal Sunshine" has been directed by Michel Gondry, a music video veteran whose first feature, "Human Nature" (2002), also written by Kaufman, had a lunacy that approached genius and then veered away. In that film, Tim Robbins starred as an overtrained child who devotes his adult life to teaching table manners to white mice. The scene where the male mouse politely pulls out the chair for the female to sit down is without doubt in a category of its own.

Despite jumping through the deliberately disorienting hoops of its story, "Eternal Sunshine" has an emotional center, and that's what makes it work. Although Joel and Clementine ping-pong through various stages of romance and reality, what remains constant is the human need for love and companionship, and the human compulsion to keep seeking it, despite all odds. It may also be true that Joel and Clementine, who seem to be such opposites (he is shy and compulsive, she is extroverted and even wild), might be a good match for each other, and so if they keep on meeting they will keep on falling in love, and Lacuna Inc. may have to be replaced with the Witness Protection Program.

For Jim Carrey, this is another successful attempt, like "The Truman Show" and the underrated "The Majestic," to extend himself beyond screwball comedy. He has an everyman appeal, and here he dials down his natural energy to give us a man who is so lonely and needy that a fragment of memory is better than none at all. Kate Winslet is the right foil for him, exasperated by Joel's peculiarities while paradoxically fond of them. The shenanigans back at Lacuna belong on a different level of reality, but even there, secrets are revealed that are oddly touching.

Kaufman's mission seems to be the penetration of the human mind. His characters journeyed into the skull of John Malkovich, and there is a good possibility that two of them were inhabiting the same body in "Adaptation." But both of those movies were about characters trying to achieve something outside themselves. The insight of "Eternal Sunshine" is that, at the end of the day, our memories are all we really have, and when they're gone, we're gone. 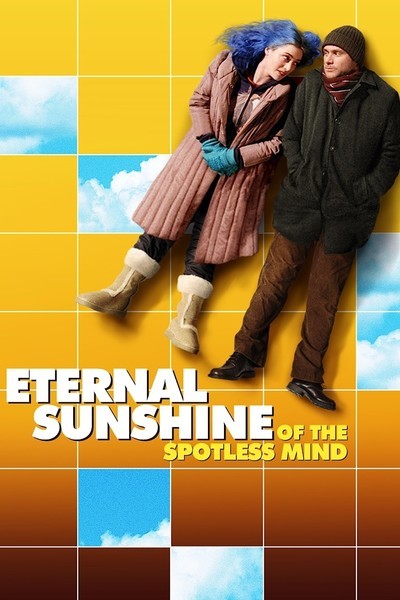 Eternal Sunshine of the Spotless Mind (2004)

Rated R for language, some drug and sexual content

Welcome to Judgment City: A Look Back at Defending Your Life

The West Wing Returns for an HBO Max Special