You have reached the cached page for https://www.rottentomatoes.com/m/dumb_and_dumber_to
Below is a snapshot of the Web page as it appeared on 10/26/2020 (the last time our crawler visited it). This is the version of the page that was used for ranking your search results. The page may have changed since we last cached it. To see what might have changed (without the highlights), go to the current page.
You searched for: Dumb and Dumber To movie We have highlighted matching words that appear in the page below.
Bing is not responsible for the content of this page.
Dumb and Dumber To (2014) - Rotten Tomatoes
Home
Top Box Office
Tickets & Showtimes
DVD & Streaming
TV
News 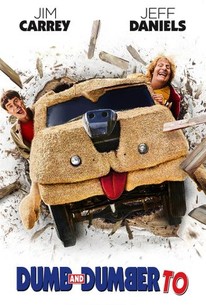 Dumb and Dumber To

Dumb and Dumber To does have its moments, but not enough of them -- and the Farrelly brothers' brand of humor is nowhere near as refreshingly transgressive as it once seemed.

Dumb and Dumber To Videos

2:25
Dumb and Dumber To: Official Clip - Funnel Nuts and Fireworks

2:07
Dumb and Dumber To: Official Clip - The Old Stinkeroo

2:03
Dumb and Dumber To: Official Clip - A Pretty Good Dad

Dumb and Dumber To Photos

In need of a new kidney and having learned that he has a long-lost daughter, dimwit Harry Dunne (Jeff Daniels) snaps his equally cretinous pal, Lloyd Christmas (Jim Carrey), out of an apparent fugue state to accompany him on a journey to find her. The witless wonders criss-cross the country using whatever mode of transportation they can find, ultimately arriving at the one place on Earth where they least belong: a summit of the world's most brilliant minds.

News & Interviews for Dumb and Dumber To

Parental Guidance: The DUFF, McFarland USA and more on DVD
New on DVD & Blu-Ray: Birdman, The Theory of Everything, and More
Now Streaming: Birdman, Big Hero 6, Life Itself, and More
View All

Critic Reviews for Dumb and Dumber To

Audience Reviews for Dumb and Dumber To

Dumb and Dumber To Quotes