You have reached the cached page for https://www.amazon.com/Unfinished-Business-Ali-Reynolds-Book-ebook/dp/B08LDX86WG
Below is a snapshot of the Web page as it appeared on 9/14/2021 (the last time our crawler visited it). This is the version of the page that was used for ranking your search results. The page may have changed since we last cached it. To see what might have changed (without the highlights), go to the current page.
You searched for: Dead Like Me Business Unfinished We have highlighted matching words that appear in the page below.
Bing is not responsible for the content of this page.
Amazon.com: Unfinished Business (Ali Reynolds Series Book 16) eBook : Jance, J.A.: Books

You've subscribed to Ali Reynolds! We will preorder your items within 24 hours of when they become available. When new books are released, we'll charge your default payment method for the lowest price available during the pre-order period.
Update your device or payment method, cancel individual pre-orders or your subscription at
Your Memberships & Subscriptions
There was an error. We were unable to process your subscription due to an error. Please refresh and try again. 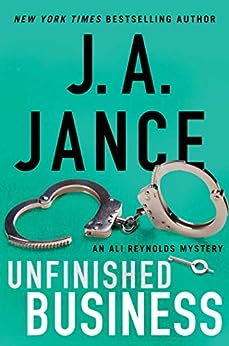 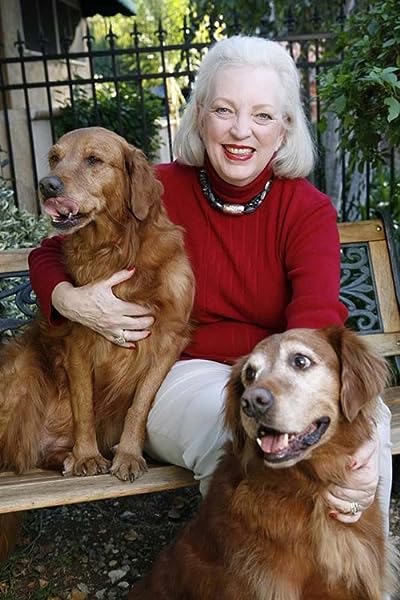 Nolyn: The Rise and Fall, Book 1
In the depths of an unforgiving jungle, a legend is about to be born. Listen now
Books In This Series (16 Books)
Complete Series 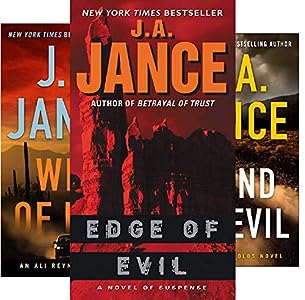 J.A. Jance is the New York Times bestselling author of the Ali Reynolds series, the J.P. Beaumont series, and the Joanna Brady series, as well as five interrelated Southwestern thrillers featuring the Walker family. Born in South Dakota and brought up in Bisbee, Arizona, Jance lives with her husband in Seattle, Washington. Visit her online at JAJance.com.

4.7 out of 5 stars
4.7 out of 5
1,873 global ratings
How are ratings calculated?
To calculate the overall star rating and percentage breakdown by star, we don’t use a simple average. Instead, our system considers things like how recent a review is and if the reviewer bought the item on Amazon. It also analyzes reviews to verify trustworthiness.
Top reviews

Celeste C.
5.0 out of 5 stars One of the best yet
Reviewed in the United States on June 2, 2021
Verified Purchase
First, a disclosure: Ali Reynolds is my least favorite of Jance's protagonists. That's why I was frankly surprised at how this book engrossed and affected me. Jance doesn't seem capable of writing a bad book, but today she has outdone herself. It doesn't hurt that she managed to believably involve not only JP Beaumont but even, ever so briefly, old friend Brandon Walker. In addition, this book is really at least 2, possibly 3 books in one; 2 distinct story lines, with the poignant subplot of Ali's personal loss interwoven, as such events often are in real life. I don't give 5 stars often, but this was a solid 5-star story, told by a master.
Read more
13 people found this helpful
Helpful
Report abuse

Pam
5.0 out of 5 stars Satisfying
Reviewed in the United States on June 1, 2021
Verified Purchase
Number sixteen in the Ali Reynolds, this addition gave me pause to think about the death of a parent. Death too young, or death due to dementia? Would I rather have had my dad for more than thirty - five years, just to deal with his suffering from dementia for most of the extra years, or lose him in one fell swoop? Something I caught myself thinking about with this book. Not that we have a choice in the matter, but it did make me stop and think. That's just a tiny piece of the story, but a huge hole in the heart.
Read more
6 people found this helpful
Helpful
Report abuse

Lee Wall
2.0 out of 5 stars Flawed series
Reviewed in the United States on June 5, 2021
Verified Purchase
I really want to like this series. However, there always seem to be issues that bother me and keep me from becoming fully involved in the stories. Here are a few of my problems with this book (spoilers!). 1. The character of Frigg belongs in a science fiction book, not a contemporary mystery. Every time they turn to “her” for answers it reminds me how ridiculous and cheap this plot device is. 2. The whole Alzheimer’s story did not ring true. You cannot get to that degree of impairment without it being noticeable - for years. Ali must be incredibly unobservant - and uninformed. 3. How is it that this supposedly hotshot security firm did not do a background check on their own potential tenant??? 4. The author pulls in J P Beaumont from one of her other series for no obvious reason and spends considerable time describing him and his family members...also for no obvious reason, other than filler. I half expected Sheriff Joanna Brady, from yet another series, to pop up. 5. The book covers multiple independent story lines. You have to take note of the chapter headings to keep track of who and when. It just felt choppy and ultimately unsatisfying since there was no real connection. At this point my mixed feelings have become too negative and I will skip any future books in this series.
Read more
4 people found this helpful
Helpful
Report abuse

Robert Clark
5.0 out of 5 stars Just A great Read
Reviewed in the United States on June 6, 2021
Verified Purchase
I started this yesterday afternoon, and early tonight I am sadly finished. ( as I always am with books by my favorite authors)
I one emailed Ms Jance that It took me a couple of books to grow to love Ali, I think because I so loved both JP, and Joanna so much. ( the walkers also)
But I grew to love her and her world of characters as much as the others. This book was very special. With a shout out to Howlers, and to loving Daniel Silva, I had goose bumps with the introduction of Beau as a cross character. This happened with Beau and Joanna many books ago, and love it when characters of different worlds connect.

If you are among the millions who love every word written by Ms Janice, down load or purchase a DTB right away and but aside the time, because this book packs a roller coaster ride of sorrow and joy.

rokitlady
5.0 out of 5 stars Technology and Science Solve a Cold Case
Reviewed in the United States on June 14, 2021
Verified Purchase
This story was an intricate weaving of many characters in the J.A. Jance family of players. Ali Reynolds was the most prominent as she and her husband, B., with their cyber security team employ an ex-con to offer him a second chance. J.P. Beaumont and his wife, Mel, from Bellingham WA lend assistance to Ali and their new employee.
Ali's Mom, Edie, and Dad Bob, are also featured as their story continues in their retirement years. This 2021 release was a very pleasant visit with many "friends" from the multiple series of this outstanding author.
Read more
3 people found this helpful
Helpful
Report abuse

Patti
5.0 out of 5 stars engaging
Reviewed in the United States on June 13, 2021
Verified Purchase
I enjoyed this book very much. It got my attention and kept me turning pages, and distracted me from my real life troubles for a while. Some mysteries focus on who was killed and solving the mystery. This book tells us about a period of time in Ali Reynold's life which includes 2-3 mysteries. One mystery is that Ali does not realize that her actions have caused a killer to set his sites on her and Cami. Ali also sets out to solve a 16 year old mystery. Ali also becomes aware that her parents very much need her support.
Read more
3 people found this helpful
Helpful
Report abuse

D.R. Bennett
5.0 out of 5 stars One man goes to prison, but is he really the killer?
Reviewed in the United States on June 17, 2021
Verified Purchase
I'm a J.A. Jance fan, and this book was one I could not put down. Essentially a murder mystery, in which finding a killer was a central goal, it included some real human interest elements and at times was quite touching. I really felt for Mateo Vega, who spent 16 years in prison for a crime he didn't commit, and I wanted a good end for him. The book moved speedily along until the last few chapters, in which JP Beaumont, the lead character in another Jance series, was momentarily introduced with background material on his life that was not needed for the main story, and speaking in the first person in a third-person novel. I was uncomfortable with this approach, and my hopes for Mateo were not truly realized, although possibilities were suggested, including restitution. Maybe he'll return in a future book and we'll find out how his case ended?
Read more
One person found this helpful
Helpful
Report abuse

teolewis
4.0 out of 5 stars Want to give a 5 star but....
Reviewed in the United States on June 4, 2021
Verified Purchase
I loved the storyline about Ali's parents and Alzheimer's and dementia. It is so relative to today's times and a nice work-in by Ms Jance. It was sad but very well done. Also, the story of Mateo and the justice system and how a person can overcome their circumstances with integrity and hard work was well written. The only reason I can not give the book a five star is because I thought the story of Cami and McCluskey was just the same old, same old and I knew what the out come was going to be. Having J.P. Beaumont show up for a few chapters was a very nice touch too. Another thing I really appreciate about Ms Jance's novels is that she does not use smut language.
Read more
One person found this helpful
Helpful
Report abuse
See all reviews

Page 1 of 1 Start overPage 1 of 1
Previous page
Next page
Back to top
Get to Know Us
Make Money with Us
Amazon Payment Products
Let Us Help You
EnglishChoose a language for shopping. United StatesChoose a country/region for shopping.
© 1996-2021, Amazon.com, Inc. or its affiliates