You have reached the cached page for https://www.amazon.com/Crimes-Passion-DVD-Ola-Rapace/dp/B00MPRQHI0
Below is a snapshot of the Web page as it appeared on 1/12/2021 (the last time our crawler visited it). This is the version of the page that was used for ranking your search results. The page may have changed since we last cached it. To see what might have changed (without the highlights), go to the current page.
You searched for: Crimes of Passion movie We have highlighted matching words that appear in the page below.
Bing is not responsible for the content of this page.
Amazon.com: Crimes of Passion [DVD]: Movies & TV 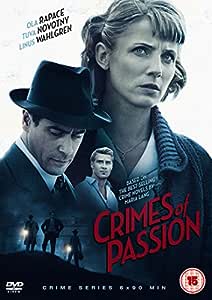 Rated:
Unrated
Format: DVD
4.3 out of 5 stars 127 ratings
See More
Playback Region 2 :This will not play on most DVD players sold in the U.S., U.S. Territories, Canada, and Bermuda. See other DVD options under “Other Formats & Versions”. Learn more about DVD region specifications here

Crimes of Passion is a period piece set in 1950s Sweden, primarily in the picturesque region of Bergslagen. The six part series follows amateur detective Puck Ekstedt, his fiancé Einar Bure and police superintendent Christer Wijk as they attempt to uncover the murderous actions that inhabit their beautiful surroundings.Laced with intrigue, sex, betrayal, secrets and lies this new series is inspired by the popular novels of Swedish crime author Maria Lang. Swedish with English subtitles

4.3 out of 5 stars
4.3 out of 5
127 global ratings
How are ratings calculated?
To calculate the overall star rating and percentage breakdown by star, we don’t use a simple average. Instead, our system considers things like how recent a review is and if the reviewer bought the item on Amazon. It also analyzes reviews to verify trustworthiness.
Top reviews

Marie Prudence Gagne
5.0 out of 5 stars Entrancing!
Reviewed in the United States on February 24, 2015
Verified Purchase
I am a fan of Swedish TV series generally, but even so, this one broke the ceiling of my usual expectations. The period (1950s) sets, costumes, make-up, and props are outstanding! Equally fine is the acting, with flawless, authentic, and entertaining characters from Tuva Nopotny, Ola Rapace, and Linus Wahlgren. The supporting cast are also all first-caliber and the story lines are clever, with plenty of twists and surprises, while the cinematography is crisp and lush. All as befit a series in which I can literally find not a single flaw. Even the opening credits are delightfully fresh, wholly retro, with great theme music from Frid and Frid. Do yourself a huge favor and get this series - you won't regret it for one edge-of-your-seat minute.
Read more
8 people found this helpful
Helpful
Report abuse

FourCats
5.0 out of 5 stars A Great Series I Do Not Want To End
Reviewed in the United States on March 2, 2015
Verified Purchase
I wasn't sure I would enjoy Crimes of Passion but quickly found out that I did. I watch numerous Scandinavian shows and this one is different from the contemporary crime dramas. It is 1960s retro with good story lines and great characters. Puck, Eje and Christer have intriguing relationships with a thread of tension between them that keeps the viewers wondering what is going to happen to them. This in addition to the main plots that easily maintain my interest. A great series I don't want to end!
Read more
9 people found this helpful
Helpful
Report abuse

Book Lover
5.0 out of 5 stars Excellent!
Reviewed in the United States on May 8, 2014
Verified Purchase
I discovered this six episode Swedish series on the International MHZ TV channel [...] and loved it! The episodes are set in the 1950's and surround three main characters Puck and Eje (an engaged and later a newly married couple) and Christer, Eje's best friend and a police superintendent. Each episode finds the trio in yet another serious murder mystery in a Swedish setting with an array of interesting suspects. I love how the trio interact where Puck (the female of the trio) has a highly sensitive compatibility with Christer and often use their combined intelligence to solve the mystery. Eje, sometimes feeling like an outsider, has different strengths that work separately, yet compatibly at dire times. All together they are heroes. It's particularly fun to see a Swedish 1950's home & decor, along with the fashions and cars and foods. Anyone who enjoys historical settings will enjoy seeing this period drama both for it's excellent acting and writing as well as lovely settings. For detailed series information see the Wikipedia write up at [...] Enjoy!
Read more
13 people found this helpful
Helpful
Report abuse

R. Oremland
5.0 out of 5 stars A new favorite
Reviewed in the United States on March 15, 2017
Verified Purchase
I cannot recommend this series enough! It reminds me of an Agatha Christie's Marple or Poirot but with a Swedish flair. The acting is fantastic. The sets are gorgeous and authentic. The storyline is just mysterious enough to not be stressful but still be gripping. It's so disappointing the series only lasted one season.
Read more
2 people found this helpful
Helpful
Report abuse

B. Woofter
5.0 out of 5 stars Great mysteries in an interesting time period.
Reviewed in the United States on February 27, 2016
Verified Purchase
I loved these mysteries but the interaction of the three main characters was great too. I am also a fan of the time period this takes place in late fifties and early sixties. It is with subtitles but I don't think that interferes at all with the enjoyment of the show. Even if you guess the mysteries the characters make up for that. Also great scenery
Read more
One person found this helpful
Helpful
Report abuse

Happy CookerTop Contributor: Pets
3.0 out of 5 stars The last 3 episodes were quite good.
Reviewed in the United States on June 14, 2017
Verified Purchase
Bit childish and far-fetched but then we're terribly spoiled by some great English crime/drams/police mysteries. Changed it from a 2 to a 3 - the last three episodes were quite good & redeemed themselves!
Read more
Helpful
Report abuse
See all reviews

Coincidence Vs Fate
4.0 out of 5 stars Fantastic Series
Reviewed in the United Kingdom on December 17, 2014
Verified Purchase
My wife was addicted to this series from the off. As for me I thought it was just another Scandinavian murder thing and didn't bother with the first couple of episodes. It wasn't until Episode three that I took and interest and I'm so glad I did.

I had just presumed "Crimes of Passion" was Marple in the Snow, but no, it is much more than that and the stories and characters have real depth. The settings are beautiful and the production is acted out superbly. There is great interplay between Puck and the other regular cast members. As the stories themselves are now 60 years old or so they tend to be character led rather than the usual "in yer face" violence we get from modern series. The stories are intriguing, intricate and sometimes sexy!

deadcardinal
4.0 out of 5 stars Too hot - well, warm - to be Miss Marple
Reviewed in the United Kingdom on March 29, 2016
Verified Purchase
Quirky semi-period Nordic cop show. Episodes are 'feature film length' and involve an archaeology prof (Linus Wahlgren) and his 'girlfriend' (Tuva Novotny). In each story, they find themselves surrounded by a murder and a bunch of nice folk like them, one of whom must be a killer.

In each episode, they get Wahlgren's best mate, top Stockholm cop Ola Rapace, involved. And sooner or later, after a lovers' tiff and extramural flirtation usually, Wahlgren, Novotny and Rapace clear up the crime. Set in a time when Swedish cars looked like sardine cans, it's a trifle 'Miss Marple-ish, except for the fact that Wahlgren and Novotny are too hot - well warm - looking to appear in an Agatha Christie novel.

S. M. OLeary
4.0 out of 5 stars Yes.
Reviewed in the United Kingdom on April 10, 2017
Verified Purchase
I really enjoyed the understated atmosphere of this series (I wish they'd done more!), the muted tones in the videography, the lilt in the language, and some insight into Swedish life from that period. It's one crime series I could watch more than once.
Read more
5 people found this helpful
Report abuse

Wagnerman
1.0 out of 5 stars Boring, Boring, Boring.
Reviewed in the United Kingdom on July 28, 2019
Verified Purchase
I just couldn't get into this series at all and gave up on it. Over the last few years we have watched some superb nordic noir but alas this was not one of them. Like watching paint dry. Sorry I can't find anything more positiv to say about it. The characters had no depth and the episodes way way too long for the flimsy plots. Avoid.
Read more
Report abuse