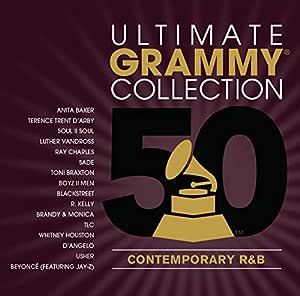 2007 release, one of seven CDs celebrating the 50th Anniversary of the Grammy Awards. Featuring the best songs from throughout the history of the Grammysr, the collection is a sumptuous ode to the biggest hits in music history and a must-have for music lovers and collectors alike. This installment features the best in Contemporary R&B and includes 16 tracks from artists like Luther Vandross, Ray Charles, R. Kelly, TLC, Whitney Houston, Usher, Beyonce and more.

1. Giving You The Best That I Got - Anita Baker

3. Back to Life (However Do You Want Me) - Soul II Soul feat. Caron Wheeler

13. It's Not Right But It's Okay - Whitney Houston

4.8 out of 5 stars
4.8 out of 5
4 customer ratings
How does Amazon calculate star ratings?
Amazon calculates a product’s star ratings based on a machine learned model instead of a raw data average. The model takes into account factors including the age of a rating, whether the ratings are from verified purchasers, and factors that establish reviewer trustworthiness.
Top Reviews

Thomas
5.0 out of 5 stars Ultimate Grammy Collection: Contemporary R&B
Reviewed in the United States on April 6, 2013
Verified Purchase
I really like this CD because it bring back memories of when I was in school and the military, good CD
Read more
Helpful
Comment Report abuse

M. Fyffe
4.0 out of 5 stars A nice overview of the 90s, that's missing that extra touch
Reviewed in the United States on December 16, 2007
To do this review, I decided to start with a heads up on each song on the album and then go into this collection's specific flaws.

The album kicks off with Anita Baker's "Giving You The Best That I've Got." The song and corresponding album cleaned up at the Grammy's, winning Best R&B Vocal Performance, Female in 1988 as well as Best R&B Song. In addition, the album of the same name won Best R&B Vocal Performance, Female in 1989. These awards were fitting as Anita Baker has such a strong sweet voice. She really delivers her all on the track as she sings about treating a lover right and giving them your all. The song is a nice start to the album and a reflection on how 90s R&B really began in the late 1980s with artists like Anita Baker. (4.5/5)

Following the track is the soulful "Wishing Well" by Terence Trent D'Arby. The album the track was from, Introducing the Hardline According to Terence TrenT D'Arby, won Best R&B Vocal Performance, Male in 1988. The song has a nice funky sound to it and has some fun musical interludes. I couldn't really tell you what the song means or is about but it is entertaining nonetheless. (4/5)

The third track on the album is Soul II Soul's "Back To Life." The track features Caron Wheeler and is most well-known for its catchy chorus. However, while the chorus is catchy, it is catchy because it is repetitive and redundant. I personally think the song is rather mediocre but it was able to win Best R&B Performance By A Duo Or Group With Vocal in 1989. (3/5)

The album really hits a sweet spot on the fourth track with Luther Vandross's "Here And Now." Listening to the sweet vocals throughout, I've already decided that if I ever get married, this must be my wedding song. Luther just sends shivers down your spine as he runs his course on this number. A great song that earned Best R&B Vocal Performance, male in 1990. (5/5)

In the fifth spot, Ray Charles appears with his "A Song For You." The song sounds almost tragic with Ray Charles death but it's still beautiful. It's a loving statement that he will love someone beyond time and place. The song won Best R&B Vocal Performance, Male in 1993. (4.5/5)

During that same year, Sade won the Grammy for Best R&B Performance By A Duo Or Group With Vocal for their track "No Ordinary Love." The song is alright but it starts to get a little boring after a while. A lot of better R&B songs won Grammy's in the 90s and I personally would have rather heard more of them. (3.5/5)

Fortunately, with the seventh track on the album, Toni Braxton is able to breathe some life back into the album with "Breathe Again." Her strong voice and the lyrics, crafted by Babyface, are beautiful. The track won a well-deserved Grammy in 1994 for Best Female R&B Vocal Performance. (5/5)

The reason Toni didn't go on to take even more Grammys becomes clear with track eight, when Boyz II Men turn the lights down low with "I'll Make Love To You." The guys won Best R&B Album that year for II and won Best R&B Performance By A Duo Or Group With Vocal. The track is top of the line and one of the main reasons the album did so well (besides you know... all of Boyz II Men's other mega hits). (5/5)

The ninth track on the album, Blackstreet's "No Diggity" walks the fine line between R&B and Hip-Hop. Featuring Dr. Dre, the song is fun and catchy, making a wonderful track to play in the car. R&B/Hip-Hop collaborations since then should take heed as this track really does it right. As such, Blackstreet won the Best R&B Performance By A Duo Or Group With Vocal in 1997. (4.5/5)

Seemingly all other Grammy's in 1997 were secured by R Kelly for his classic "I Believe I Can Fly." Winning Best Male R&B Vocal Performance, Best R&B Song, and Best Song Written Specifically For a Motion Picture Or For Television, R Kelly had secured a mega-hit with the track from the Space Jam soundtrack. The song is tremendous with a nice uplifting message. While it's a little repetitive when all is said and done, it's still a fine track. (4.5/5)

The eleventh track of the album, "The Boy Is Mine" by Brandy and Monica, is what happens when two big R&B rivals team up together. Going back and forth, the girls really rock it out. The song scored a lot of success for its combination and is an enjoyable listen. In 1998 it secured the Grammy for Best R&B Performance By A Duo Or Group With Vocal. (5/5)

The pace picks back up again on the twelfth track with TLC's "No Scrubs." The song is catchy but it gets repetitive and the final chorus seems to run on forever. Still, the song is light and entertaining and can be fun to sing along to. In 1999, the track took Best R&B Performance By A Duo Or Group With Vocal and the album, Fanmail won Best R&B Album. (4/5)

The thirteenth track on the album, "It's Not Right, But It's Ok" is a nice well-written track by Whitney Houston. There's some smooth delivery by her on the track and it's an entertaining number, though its far from the best by Whitney. The song won Best Female R&B Vocal Performance in 1999. (4/5)

D'Angelo holds things down on the fourteenth track with the song "Untitled (How Does It Feel)." There's not a lot to the track but it's still a smooth number. And besides, who can forget the video with D'Angelo stark naked. The song is smooth and sexy but lacks a lot of meat. It won Best Male R&B Vocal Performance in 2000 and its album, Voodoo won Best R&B album. (4/5)

Nearing the end of the album, Usher comes out strong on the fifteenth track with "U Remind Me." The song is a great number and one of Usher's best in my opinion. Its catchy and a fun listen, making it a great number to sing along with. In 2001, it secured Best Male R&B Vocal Performance. (4.5/5)

Closing the album, Beyonce's "Crazy In Love" comes out, having secured just about every Grammy in 2003. The track won Best R&B Song and Best Rap/Sung Collaboration. In addition, the album won Best Female R&B Vocal Performance and Best Contemporary R&B Album. The song is an uptempo mix with Jay-Z in a support role. It really pulls on you and works well, as an entertaining balance between R&B and hip-hop. Overall, a solid song. (4.5/5)

Looking at the album from a distant perspective, it's a solid collection of songs. It seems that the makers of the CD decided to only put one track per artist on the album, explaining why a number of mega-hits in the 90s are strangely absent, despite their Grammy status. Another thing that really bothers me about the album is that the booklet is lacking. A collection like this, especially one that revolves around a theme like the Grammys, can really do well with the album's booklet. A history of R&B in the 90s, or perhaps a little overview of each of the year's debates as to what songs would win Grammys would have gone a long way. As is, the booklet really just states what Grammys were won by each track.

Despite these complaints, the album is a great span of modern R&B. Any and all tastes are here and as such, it's a good choice for fans of the genre. While the CD might not be worth picking up if you have most of these albums anyway, it's still a good overview. It especially works great when you need to convince the non-believers that R&B's got a lot going for it, as many of these tracks were pop hits in the 90s as well. Overall, an enjoyable album that's worth checking out.

Final Word: A solid overview of 90s R&B, this album is a great gift to fans of the genre, and is a good way to convince non-believers that R&B is great. At 10 dollars, this album's a much better deal than you'll find on iTunes.

Anthony W. Ramsey
5.0 out of 5 stars Ultimate Grammy Collection
Reviewed in the United States on August 8, 2008
Now that's what we grew up on! Just pop it in the car stereo, and ride!
Read more
Helpful
Comment Report abuse
See all reviews from the United States