You have reached the cached page for https://freepressokc.com/charlie-and-the-chocolate-factory-semi-sweet-with-little-nutritional-value/
Below is a snapshot of the Web page as it appeared on 1/1/2022 (the last time our crawler visited it). This is the version of the page that was used for ranking your search results. The page may have changed since we last cached it. To see what might have changed (without the highlights), go to the current page.
You searched for: Claire Shaiman We have highlighted matching words that appear in the page below.
Bing is not responsible for the content of this page.
“Charlie and the Chocolate Factory” - semi-sweet with little nutritional value
Friday, December 31, 2021
Sign in
Welcome! Log into your account
Forgot your password? Get help
Privacy Statement
Password recovery
Recover your password
A password will be e-mailed to you.
Oklahoma City Free Press Oklahoma City's award-winning independent news
Home Music “Charlie and the Chocolate Factory” – semi-sweet with little nutritional value
Share
Facebook
Twitter
ReddIt
Email
Print

OKLAHOMA CITY (Free Press) — When an artist or group attempts to recreate or reimagine a story so well-known and beloved as an all-time classic, it’s bound to be fraught with difficulty. Comparisons are sure to abound, and not always appropriately so.

Any new production deserves to be considered, judged and appreciated purely on its own terms. Any new adaptation can define itself in different and novel ways, creating its own unique language or stamp on the history of the source material.

But when a new adaptation so openly invites comparisons to an earlier classic, clearly asking its audience to connect the two, then we’re given no choice but to consider and judge it against that classic version.

Such is the case with Broadway’s “Charlie and the Chocolate Factory,” with a touring company production currently playing at the Civic Center Music Hall in Oklahoma City through October 31st.

First things first, the cast is remarkable. This is both a vocally and physically demanding show. Practically every single person that graces the stage gets some singing to do, but also falling, slipping, sliding, and loads of other fantastical shenanigans, not to even yet mention the dancing and choreography, all of which is wonderfully impressive, even acrobatic or balletic at times.

Every performer on stage throughout the evening acts, sings, and dances their heart out, without question, and everything from the costuming to the lighting and stage design to the orchestra are second to none for this level of stage production. It’s a legitimately fantastic piece of production work, and that element on its own deserves nothing but praise.

So, too, do the joint leading performers, Cody Garcia as the man himself, Willy Wonka, and (at the performance that I attended) young William Goldsman as the titular Charlie Bucket. Garcia brings some fun and youthfulness to Wonka without ever falling into the ill-conceived, weirdo Michael Jackson impersonation that Johnny Depp subjected us to in Tim Burton’s equally ill-conceived film adaptation. And Goldsman projected unrestrained wonder and childlike imagination so believably that it was difficult to not get swept up in the same feeling at times.

Also of special mention is Claire Layden as Charlie’s mom, Mrs. Bucket. She’s not given a lot to do in service of the story, but her portrayal of a young working widow smiling through a daily pain is genuinely beautiful, and her one solo song, “If Your Father Were Here,” is hands down the emotional centerpiece of the entire night.

Unfortunately, this is where both the comparisons to the classic and the issues with this new adaptation begin.

As I said, this play pretty openly invites comparison to the beloved 1971 classic “Willy Wonka and the Chocolate Factory” starring the legendary Gene Wilder. Wonka’s primary wardrobe, even including his hair, and a seemingly random selection of songs are all pulled obviously from the film.

The play opens immediately with sweet shop classic, “The Candy Man,” though here it’s sung not by a kindly shopkeeper, but by Wonka himself, appearing on stage to introduce this version of the story’s main conceit: Willy Wonka is depressed by the lack of interest in his candy, the lack of imagination in modern children, and more than anything, the declining sales of Wonka chocolate.

You read that right. This Wonka is pretty well firmly concerned with capitalism… and little else, at least through the beginning of the story.

For fans of not only the original film, but of Roald Dahl’s original novel, it’s a striking and shocking change. The 1971 film was a brilliant send-up of rampant capitalism and its unstoppable power in the face of competition. Veruca Salt’s father owns a factory and forces the workers to slave away unwrapping candy bars until they find a golden ticket for his daughter. Mr. Beauregard is a car salesman that used his wealth and standing to find a ticket for his gum-obsessed daughter. The Gloops and the Teavee families are both shown to be wealthy in their own right, at least enough to feed their childrens’ obsessions and give them anything they want.

Both the book and original film, as well as even (at least to an extent) the Burton film are all pretty clear allegories for the dangers of spoiling your children and raising them to be entitled or greedy.

Charlie was the hero because he wasn’t entitled or demanding. He was kind and generous and, above all, honest. The 1971 Charlie stole Wonka’s Fizzy Lifting Drink and pocketed the top-secret Everlasting Gobstopper, but he reconsidered in the end and came clean in the name of honesty and kindness. That’s what made him the right choice to replace Wonka.

For this new stage musical, that entire central moral issue is repurposed and replaced with a frankly tired and arguably lazy statement about the lack of imagination among today’s children.

The ballooning wealth and overt capitalist overtones of each of the kids and their parents is glossed entirely over with very little emphasis. This version of Mike Teavee, for example, freely admits to “hacking” Wonka’s system in order to steal a ticket for the tour without any clear consequence or disqualification. These kids are all just obnoxious, social media-obsessed modern kids, and it’s made clear to the audience over and over again that that is the biggest problem with them.

Wonka, meanwhile, in an effort to increase his bottom line (again, this seems to be his biggest concern) puts on a disguise and opens a candy store down the street from Charlie. He then proceeds to spend the entirety of the play’s first half treating Charlie, honestly, like trash.

He’s… mean. I can’t think of a better word for this Wonka. He’s just mean.

Once the ticket-holders are assembled at the factory and the fateful tour begins at the beginning of the second act, the story plays out pretty much as you know. One by one, the children are disposed of, though this version makes absolutely no bones about pretty obviously killing them.

One of them explodes just off stage. Another is ripped apart in full view of the audience, with a man-sized squirrel raising the head up high to be seen. It’s the kind of mindless violence that is admittedly sure to delight children in the audience and to make them pay attention, but it’s the exact same kind of violence that Dahl himself so lamented in entertainment.

There are jokes made throughout at the expense of antidepressants, alcoholism, and even one of the child characters acting like a heroin-addicted junky, complete with compulsive scratching.

It’s difficult to know exactly what audience all of this is geared toward.

The story is obviously designed to teach children to put away their phones and computers and drop their Tik-Toking and Instagramming, and it does so with decidedly “modern” musical numbers such as the throwaway hip-hop of “Queen of Pop” and the flatly awful “Vidiots.” But then the inclusion of the classic numbers like “Pure Imagination” and “The Candy Man” can only be intended to provide parents with that ever-so-lucrative nostalgia.

It didn’t have to be this way, though. This American Broadway version of the story is a near-total retooling of a successful West End production originally conceived for the London stage by acclaimed director Sam Mendes and theater great Marc Shaiman. That version keeps the spirit of the story intact, preserves the character of Wonka, and has the confidence to rest on its own original songs, save for an emotional climax set pretty perfectly to “Pure Imagination.”

Apparently, someone decided that American kids wouldn’t accept all of that, so the entire story was re-conceived and the majority of the musical numbers were rewritten, presumably in an effort to better hold the attention of young American audiences, pandering to the adult perception of childhood in exactly the way that Dahl’s work refused to do.

The original West End production gets most of the classic elements right. The Broadway version that the Civic Center is hosting gets the majority of them very wrong.

Don’t get me wrong, the production is impressive, the performances are great, many of the songs are catchy, and if you have small children (and you don’t mind getting them tested for COVID beforehand) then your whole family will likely have a fun and cheerful night of entertainment, and this is admittedly a great way to introduce children to the magic of live musical theater. Just don’t expect it to have the resonance or emotional longevity of Dahl’s book or the original film.

“Charlie and the Chocolate Factory ” is now playing at Civic Center Music Hall through October 31st, presented by OKC Broadway. Tickets and information can be found at okcciviccenter.com and okcbroadway.com. 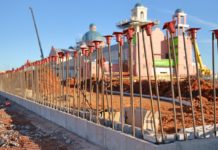 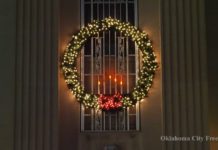 Movies, Music, and Meals! Celebrate the Holidays around OKC

Sustain our journalism by becoming a supporter

Oklahoma City Free Press is dedicated to providing high quality journalism that positively impacts our community. We give voice to those who aren’t heard and expose that which is hidden from the public. Click this link or the red button below to support our mission.