You have reached the cached page for http://scriptshadow.net/10-screenplay-tips-from-the-greatest-sports-movie-ever-hoosiers/
Below is a snapshot of the Web page as it appeared on 3/31/2021 (the last time our crawler visited it). This is the version of the page that was used for ranking your search results. The page may have changed since we last cached it. To see what might have changed (without the highlights), go to the current page.
You searched for: Can baseball players read movie screenplays? We have highlighted matching words that appear in the page below.
Bing is not responsible for the content of this page.
10 Screenplay Tips From The Greatest Sports Movie Ever – HOOSIERS!

10 Screenplay Tips From The Greatest Sports Movie Ever – HOOSIERS! 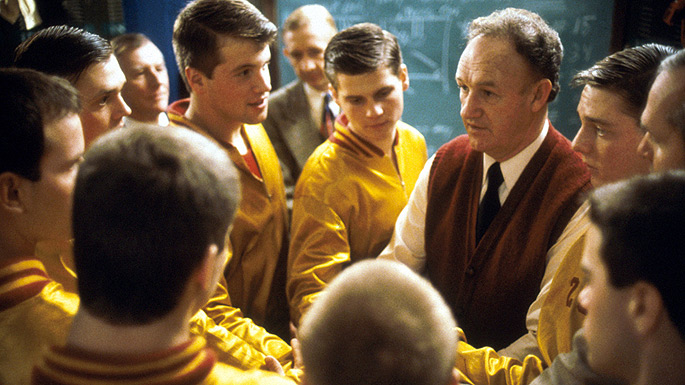 I’ve been feeling bad since I wrote the article last week about the six types of scripts least likely to get you noticed. I got a lot of e-mails from people who were writing those scripts, and boy were they unhappy. I was most affected by those who had written sports movies. I love sports and I love a good sports movie. So my heart goes out to those struggling to get their sports script through a system that just isn’t receptive to the genre. I still believe that the only realistic shot you have of getting your sports spec picked up is to option an interesting true story or write about a compelling sports figure. With the unending number of sports games that have been played throughout time and the number of sports figures that have lived and died on this earth, there are still so many interesting stories that have never been told. With that said, if you’re going to write a sports script, you may as well learn from the best. And Hoosiers is as good as it gets. I’m going to find out what made this script work, as well as pass you a few tips about sports scripts in general. There’s one thing I can’t explain, though. How is it that the writer of this great movie, Angelo Pizzo, has only written TWO PRODUCED MOVIES since???

1) Character over sport! – Easily, one of the biggest mistakes writers make when writing sports movies is focusing on the sport instead of the characters. Remember, audiences don’t care about that final goal, that final shot, or that final touchdown, unless they care about the person making it. You almost want to approach your sports script as a character piece that has sports elements, as opposed to the other way around. Formulate a compelling controversial memorable main character, then feed the sports stuff in there. You see this in Rocky, The Natural, Hoosiers, Bull Durham, and all the best sports movies throughout time. A great main character first!!!

2) Try to give each player on the team small character flaws they must overcome – In a sports movie, it’s essential that each kid have that one clearly defined character flaw that’s holding them back from being the best player they can be. Take the short player in Hoosiers. He doesn’t believe in himself. He thinks of himself as just a practice player. He eventually learns to believe in himself and ends up helping the team win a key game. Every player has to have their own little storyline!

3) You need to give the coach a COACHING FLAW – Same deal. Every sports movie needs that coach who has a flaw that’s preventing him from being the best coach he can be. Gene Hackman’s character refuses to listen to his players. He’s only going to do it HIS WAY. In the last timeout of the championship game, then, we see him overcome this flaw when he allows the kids to run their play instead of his.

4) Every sports movie needs a TEAM PROBLEM – This is some play issue the team can’t seem to get over. Here, it’s the concept of “team.” Don’t dribble the ball up the court and shoot. You HAVE to pass the ball four times before anyone can shoot. This concept is a constant battle throughout the movie, with certain players refusing to go along with it. As a result, it was satisfying when they bought into coach’s game plan and started winning because of it.

5) Write around a sport – If you’re a big sports fan but don’t want to write yet another cliché sports movie about a team or player who overcomes the odds and wins the championship, consider writing about the people surrounding the sport. The reason this works is because it introduces us to a new exciting world we’re unfamiliar with. Cameron Crowe did this famously with sports agent Jerry Maguire. Zallian and Sorkin did it with Moneyball. And more recently, Scott Rothman and Rijav Joseph did it with Draft Day, the number one Black List script, which focused on an NFL general manager during draft day.

6) MIDPOINT SHIFT ALERT – Remember, a midpoint shift is a severe event in the middle of the story that shifts the second half of the movie so it feels different from the first. In most cases, that moment makes things worse for your hero. But here, it actually makes things better. The mid-point shift of Hoosiers is when Jimmy (the star player) announces that he wants to rejoin the team. With Jimmy now on the squad, it’s no longer about becoming a decent team, it’s about winning. It’s about having a legitimate shot at being great!

7) Make the romantic interest a source of conflict – I like when the romantic interest is also one of the main sources of conflict for the main character. You end up killing two birds with one stone. Here, Myra, the vice-principle and main love interest, is the only person in Indiana who hates basketball. Talk about a tough girl to chase if you’re the new basketball coach!

8) Write about the coach – As I watched Hoosiers for the billionth time, I realized something. There are no other truly good basketball movies in sports history (unless you count Air Bud and Love & Basketball). It doesn’t seem to be a sport that lends itself to cinema. I wanted to know how Hoosiers overcame that and not only became the best basketball movie of all time, but the best sports movie of all time. I came to the conclusion that it’s because the main character wasn’t one of the players. It was the coach. This falls in line with my above tip: “Write around the sport.” Concentrating on the coach allows you to tackle problems from the person with the most power over the game. The decisions a coach makes (who to play, who to sit, who to favor, who to discipline, how to train, how to strategize) in addition to the exterior pressures he faces (the way the town wants him to play, the way the manager wants him to play, the way the star player wants to play) typically make him one of the most interesting people to watch. That was definitely the case here.

9) Each game needs to be its own little movie – With each game in your script, you want to create your own little movie with its own specific problem, something the characters will all learn from and, whether they realize it or not, get better from. The first game in Hoosiers, for example, is about the players not listening to the coach. That’s the problem. So what does Coach do? He sits the most egregious player of the bunch, even when the team needs another player on the floor! He’d rather play FOUR players than have someone not listen to him. The problem is solved by the end of the game. The players now realize that it’s the coach’s way or the highway. And highways go on forever in Indiana.

10) Create a compelling goal that works concurrently with the main storyline – If the only question you have for us in your sports movie is, “Will they win the championship?” we’ll get bored. You need other storylines working concurrently with the main one, another goal our main character must achieve. Here, it’s “Getting Jimmy,” the player who many consider to be the best in the state, but who has no interest in playing.

BONUS TIP – Tie your elements together – Where real writing comes into play is when writers learn to tie the elements that make screenplays work together. So in this case, Angelo Pizzo has written in some great conflict between our main character, Coach Dale, and the romantic interest, Myra. He’s also created this great subplot (that I just mentioned) where Coach Dale needs to convince Jimmy to join the team. Individually, both these situations work well, but it’s tying them together that makes them truly powerful. Myra doesn’t like basketball. She believes it’s way more important for Jimmy’s future that he focus on his studies, which is why she doesn’t want him on the team. Therefore, one of the biggest elements of conflict in the movie, Myra, is also the obstacle Coach Dale must get past in order to land Jimmy. That’s great writing!