Birds of Prey (and the Fantabulous Emancipation of One Harley Quinn)

Margot Robbie is the most adorable sociopath you’d ever want to hang out and blow stuff up with in “Birds of Prey (And the Fantabulous Emancipation of One Harley Quinn).”

The sour “Suicide Squad” gave us a little taste of the artist formerly known as Harleen Quinzel in 2016, when she was the Joker’s dutifully violent girlfriend; “Birds of Prey” offers a veritable smorgasbord of this DC Comics super-villain in all her charismatic, complicated glory. By detailing the character’s origin story and establishing her own franchise, director Cathy Yan pulls off the tricky feat of blending elaborate action sequences with compelling character development, of transporting us to a richly specific Gotham City but sprinkling in just the right amount of pop-culture references, ranging from Bernie Sanders to Tweety Bird to Frida Kahlo.

From its lively and vibrant animated opening, Yan’s film is a complete blast, filled with zippy energy and irresistible girl power. And Robbie, in her seemingly endless versatility, is up for every challenge in a role that’s as demanding physically as it is verbally. She is positively infectious in the candy-colored chaos she creates.

Robbie shines radiantly at the film’s center as the newly single Harley Quinn – whether she’s rhapsodizing about a hangover-curing bacon-and-egg breakfast sandwich or emerging from a cloud of rainbow-colored glitter and smoke in slow motion, a sly grin on her made-up face. But Robbie gets great help from a diverse and talented array of co-stars, including Jurnee Smollett-Bell, displaying serious action chops in the fierce, physical role of songstress Black Canary. The script from Christina Hodson (“Bumblebee”) is a muscular celebration of feminine strength, of women discovering and honing their powers to prop each other up in a world where men keep letting them down – or worse. These are ladies who will happily offer each other a hair tie before heading into battle together.

But after a thrilling first act with its self-referential humor, cheeky graphics and knowing narration, “Birds of Prey” drags in the middle as it jumps around in time and establishes the backstories for the various “birds” with whom Harley will team up eventually. This seems sort of inevitable when going through the motions of setting up new characters within a burgeoning franchise, but the downshift feels jarring compared to the fast-paced section that preceded it.

Besides Black Canary, the nightclub singer whose voice carries overpowering sonic waves, there’s Mary Elizabeth Winstead as the amusingly stoic and socially awkward Huntress, who’s spent her whole life training to exact revenge with a crossbow. Rosie Perez’s Renee Montoya is a bit underdeveloped as a former Gotham City police detective who’s battling her demons even as she finds new purpose as a vigilante. And Ella Jay Basco brings a naturalism to the role of teenage pickpocket Cassandra Cain, who draws them all together when she steals the film’s MacGuffin – a valuable diamond – from the head honcho to mob boss Roman Sionis, aka Black Mask (Ewan McGregor).

The glittery object that binds them to each other isn’t as important as the newfound freedom they’re all enjoying from the jobs, relationships and circumstances that held them down for too long. The title refers to Harley’s emancipation but all five women get to feel what it’s like to blaze new trails on their own terms. The timing couldn’t be more apt in this post-#MeToo era, and the tone of “Birds of Prey” feels like a welcome breath of hopeful air following last year’s well-acted but self-serious “Joker.”

And the film is a consistent visual treat. Matthew Libatique, Darren Aronofsky’s usual cinematographer, gives Gotham City a cool, smoky sheen, all the better to make the vibrancy of Harley’s colors pop. Along those lines, the costume design from Erin Benach (“Drive,” “The Neon Demon”) is a complete kick, and not just for Harley in her wide array of playful, punk rock get-ups. Perez’s Renee gets to wear a T-shirt that’s so unapologetically profane, we can’t repeat what it says here. And McGregor parades about in aviators, jewel-toned velvet blazers and a collection of monogrammed gloves to protect his hands from all the dirty work he does. He seems to be having a ball.

Some of the song choices are a little painfully on the nose, though. Joan Jett & the Blackhearts’ “I Hate Myself for Loving You” blares as Harley soothes herself after the Joker breakup by lazing on the couch in a onesie, squeezing easy cheese into her mouth and sobbing. Heart’s “Barracuda” blasts during a climactic showdown between Harley and her crew vs. Black Mask and the army of angry dudes he’s assembled.

But Yan was wise to let the fight scenes play out rather than providing a false sense of energy by overly editing them, allowing us to appreciate all the athleticism and artistry the choreography demands. These birds truly do take flight, and they’ll continue to soar. 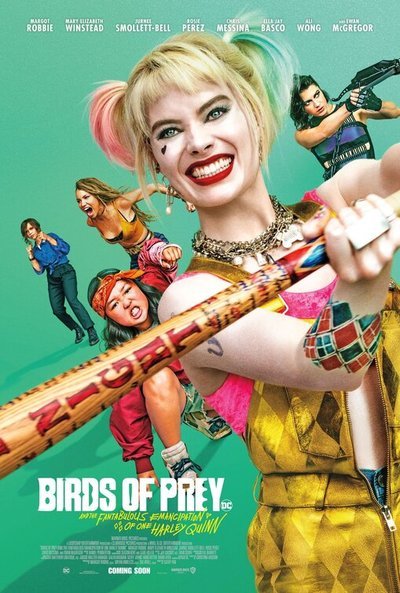 Rated R for strong violence and language throughout, and some sexual and drug material.

On the Graceful Work of Composer Emile Mosseri

Book Excerpt: This is How You Make a Movie by Tim Grierson