You have reached the cached page for https://www.folkradio.co.uk/2018/05/ray-cooper-between-the-golden-age-and-the-promised-land/
Below is a snapshot of the Web page as it appeared on 10/23/2020 (the last time our crawler visited it). This is the version of the page that was used for ranking your search results. The page may have changed since we last cached it. To see what might have changed (without the highlights), go to the current page.
You searched for: Between the Golden Age & the Promised Land Ray Cooper We have highlighted matching words that appear in the page below.
Bing is not responsible for the content of this page.
Ray Cooper: Between the Golden Age and the Promised Land | Folk Radio
Album ReviewsBritish Folk Music

Ray Cooper: Between the Golden Age and the Promised Land

by Johnny Whalley 26 May, 2018
0
FacebookTwitterPinterestEmail Ray Cooper – Between the Golden Age and the Promised Land

Ray Cooper will still be best known to most for his many years with Oysterband, an unmistakable figure on stage, usually to be seen embracing his cello. Whilst with the Oysters he was writing songs jointly with the band and for himself, releasing his first solo album in 2010, the snappily and accurately titled, Tales of Love, War and Death by Hanging. Since leaving Oysterband in 2013, he’s been busy performing both solo and as part of The Swedish Kitchen Orchestra, a quartet of musicians from Sweden, where he’s lived for almost 20 years. Between the Golden Age and the Promised Land is the third album he’s released under his own name and it is a truly solo album. All the tracks have either been written by Ray or are his arrangements of traditional songs and he plays all the instruments, guitars, cello, mandolin, harmonica, harmonium, bass guitar and also piano, for the first time on a recording. He also looked after all the recording himself, bringing in long-time Oysterband producer Al Scott for mixing and mastering.

The opening song, Drunk on Summer, makes it clear that whilst Ray’s emergence as a notable song writing talent has happened over the last eight years, it has been the best part of a lifetime in the making. A memory from when he was sixteen and still at school is the trigger for a song that recalls the events and emotions of a summer’s afternoon with uncanny clarity. Only Ray knows how long it took for the song to emerge from the chrysalis of that memory but whilst the tune perfectly captures the jovial enthusiasm of youth, the lyrics carry signs of the awareness of an older man. In comparison with subjects dealt with in several of the songs, Drunk on Summer is light-hearted yet the lyrics still give you cause to stop and think.

Looking back on the rosy memories of Drunk on Summer it’s easy to see how the adolescent years could be thought a golden age. And certainly, the 19th Century American immigrant hymn, Wayfaring Stranger, the album’s last track, perfectly embodies the theme of a promised land. Bracketed between those songs, the remaining eight tracks all occupy a place somewhere on that timeline, between reminiscing for a golden past and striving for the promise of a better future, all the songs fitting nicely within the album’s title. The stories told in these songs are an eclectic mix, some drawn from Ray’s own experiences, some the product of considerable research into characters and events that have piqued his interest.

Following from Drunk on Summer, reckless youth also features in the second song, The Unknown Soldier Has A Name. The title gives the clue that the consequences for Fred Broadrick were rather more serious, executed at dawn for what the Army considered to be cowardice. The song paints Fred as a cheerful, mandolin playing Brummie and Ray’s mandolin injects the song with enough bounce and swagger to almost make you forget the tragedy of Fred’s death. Almost… and there lies the power of the song.

Love and Vengeance is also set in wartime, in the Middle East during WWII. Asmahan, a stunningly beautiful woman, was a singer and actress but also a princess and quite possibly a spy. She assuredly belongs to a golden age but the image evoked by the song is of a restless life spent searching, maybe for a promised land. Ray’s principal instrument for the arrangement is piano, heavy chords that punctuate the lyrics and heighten the drama of the story.

The most personal song on the album, Little Flame, was written for his daughters. The imagery of the song likens growing from a child into a woman to a fire that must first be tended carefully, protected whilst it smoulders, until flames burst through and the fire blazes. Ray clearly intends this to be his template for fatherhood.

The stories that Ray has unearthed have obviously fascinated him, he’s put notes in the album booklet sketching out the facts, so far as knows them, even, occasionally, giving pointers to sources if we want to learn more. But the songs don’t concern themselves overmuch with facts, Ray has come to know these people and his skills as a song writer entice us into their worlds, giving them character, personality. This is what music can do so well and with this album Ray has shown himself to be a master of the craft. His work with Oysterband gave him ample opportunity to demonstrate his instrumental skills, solo, he keeps expanding his range. I feel there isn’t an instrument he wouldn’t turn his hand to if the need arose. But it was the desire to further his song writing that drove him to move on from Oysterband and this album fully vindicates that decision. One feels he has a growing confidence in his songs and that promises much more to come. Between the Golden Age and the Promised Land is an album full of treats for the senses and with plenty to exercise the mind.

Out now, Order via Amazon | Bandcamp

We earn a small commission for purchases made through Amazon links in our posts.


Enjoyed discovering new music, reading our articles and listening to our weekly mixes?

Please consider making a donation to help support us.

Lives on Hampshire’s South Coast where Isle of Wight frustratingly blocks view. Allegedly retired but once a geologist always a geologist. Nevertheless plays and sings in various local folk bands. Leans towards traditional folk, but prepared to listen to most things, ends up enjoying many.


Get our Free Newsletter

Jenny Sturgeon
Artist of the Month 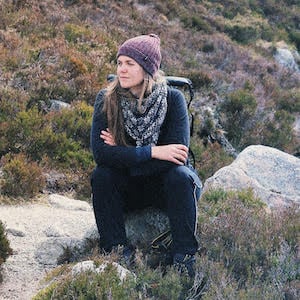 Featured Albums of the Month 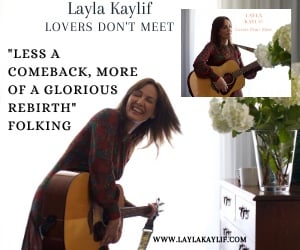