You have reached the cached page for https://www.legacy.com/us/obituaries/latimes/name/barbara-pascal-obituary?pid=178012534
Below is a snapshot of the Web page as it appeared on 7/12/2021 (the last time our crawler visited it). This is the version of the page that was used for ranking your search results. The page may have changed since we last cached it. To see what might have changed (without the highlights), go to the current page.
You searched for: Barbara Pascal We have highlighted matching words that appear in the page below.
Bing is not responsible for the content of this page.
Barbara Pascal Obituary (1934 - 2016) - Los Angeles, CA - Los Angeles Times
Barbara R. Pascal
1934 - 2016 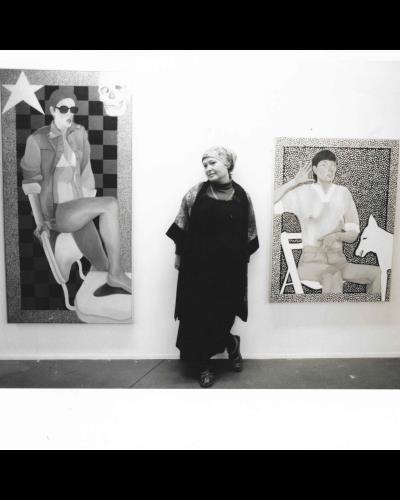 BORN
1934
DIED
2016
June 24, 1934 - March 9, 2016 Barbara Edelberg Pascal, owner of the prominent Los Angeles artists' book gallery, ArtWorks, died after a brief illness at St. John's hospital in Santa Monica. She was 81. Barbara was a well-known figure in feminist art circles in the city from the mid-sixties, and she sold artists' books in Venice, on La Brea, and at Bergamot Station. She earned a bachelor's degree in English at UCLA and a master's degree in Library Sciences at USC. Her extensive artists' books collection has been donated to the Yale Art Library's Special Collections. She was born on June 24, 1934, the daughter of Albert and Sophie Edelberg. Barbara grew up in the Los Feliz area and attended Fairfax High School, where she was a member of the Tantra sorority. Her lifelong friend Judy Marcus was a fellow Tantra. The young Bobbie Edelberg married Tony Pascal, her schoolmate at John Burroughs Junior High School and Fairfax, in 1956. The young couple lived in New York City at the time of their marriage, where Anthony Pascal was pursuing PhD studies in Economics at Columbia University. He took a job at the Rand Corporation in Santa Monica, where he was a senior economist for more than 30 years. The Pascals celebrated their 60th wedding anniversary in February. Barbara was a highly literate and sophisticated connoisseur and custodian of feminist and avant-garde artists' books. She was very active in the feminist art movement of the '70s, working at the Woman's Building in Downtown Los Angeles when it was founded in 1975. She opened her gallery shortly thereafter. She had a passion for British literature, with a special interest in Virginia Woolf and the Bloomsbury Group. Her life and that of her family was integrated along the lines of the Bloomsbury tenet of an immersion in beautiful art, books, films, and food. The Pascal family traveled throughout Europe and the British Isles numerous times, and her art-related adventures in the U.S. and England continued until recently. Last September she attended the gala opening of her closest friend Darren Waterston's show, Filthy Lucre, at the Smithsonian in Washington D.C. Ms. Pascal is survived by her husband, and two daughters, Amy Pascal, film producer, and Jenny Pascal, a marriage and family therapist. She is also survived by her sons-in-law Bernard Weinraub and Alex Siskin, and three grandchildren, Isabel and Charlie Siskin, and Anthony Pascal Weinraub. A memorial gathering will be held at the Pascal home on Sunday at 2pm.
To plant trees in memory, please visit our Sympathy Store.
Published by Los Angeles Times from Mar. 10 to Mar. 11, 2016.
MEMORIAL EVENTS
No memorial events are currently scheduled.
To offer your sympathy during this difficult time, you can now have memorial trees planted in a National Forest in memory of your loved one.
MEMORIES & CONDOLENCES
3 Entries
Dearest Tony,

I was writing to Barbara to wish her and the whole family a happy Passover...then I was shocked when my message came back and then to see this obituary.

I am so very very sad to learn this terrible news.

Ralph and I send our deepest condolences to you, Amy and Jenny, their spouses and your beautiful grand children.

May you and the girls find comfort in wonderful memories and the love of your devoted friends and family.

Love you, Micki Handel nee Hurwitz
April 22, 2016
Dear Jenny and Amy,
Although I never met your mom, I felt as though I knew her. I missed Jenny's birthday tea at her house, but she was so lovely to say I would be missed. She reminded me of my mom...and I am thinking about you both now at this hard time. Sending our love to the entire family, Sue and Marcus x
March 16, 2016
Hi Amy - So incredibly sorry for this loss. Thinking of you during this time of transition. Much love, Queenie.
March 14, 2016
Showing 1 - 3 of 3 results