You have reached the cached page for https://www.movieguide.org/reviews/Baghead.html
Below is a snapshot of the Web page as it appeared on 6/6/2020 (the last time our crawler visited it). This is the version of the page that was used for ranking your search results. The page may have changed since we last cached it. To see what might have changed (without the highlights), go to the current page.
You searched for: Baghead movie We have highlighted matching words that appear in the page below.
Bing is not responsible for the content of this page.
BAGHEAD | Movieguide | Movie Reviews for Christians
Search
Home
Reviews 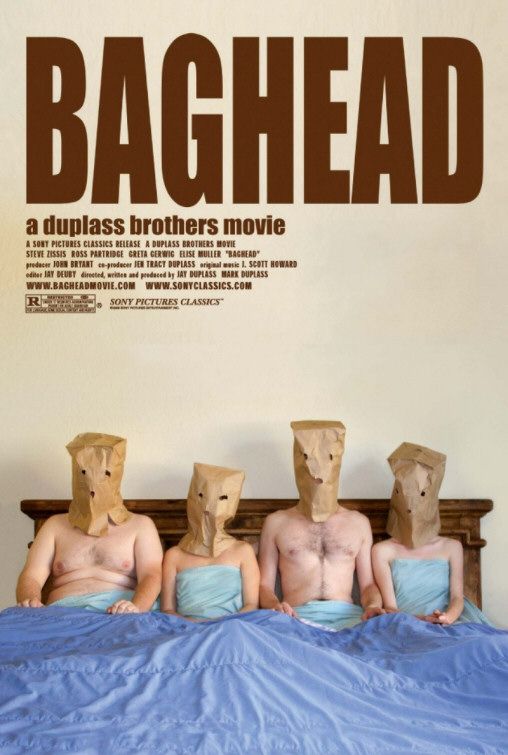 BAGHEAD is a low-budget horror comedy. In the story, four actors are inspired by an independent movie to write their own script in which they will star themselves. One of the actors, Chad, likes Michelle, but Michelle likes Chad’s handsome best friend, Matt. Meanwhile, Catherine wants to get back together with Matt, but Matt considers their relationship to be over. They go to an isolated cabin to write their script. Michelle has a scary dream about a man with a bag on his head lurking around the cabin. Or was it really a dream? The question becomes moot when such a menacing character does show up. Then, Chad and Catherine disappear, leaving Matt and Michelle to wonder what’s happening.

BAGHEAD veers from comic horror to scary horror, but there’s not much actual violence in the movie. The story takes a while to lift off, but it offers some surprises once it gets going. The last scenes are surprisingly touching. The editing, photography and camerawork are decidedly low budget. The movie also contains plenty of strong foul language and some overly explicit, gratuitous nudity in a couple scenes, especially the first one.

(Ro, B, LLL, V, S, NNN, AA, D, MM) Vague Romantic worldview with a main character honoring a commitment to his best friend; about 69 obscenities, five strong profanities, 13 light profanities, and woman vomits; light, but sometimes scary violence includes man with bag over his head and a knife scares and chases people, man on top of another man appears to be stabbing him, man has wound on head from accident; no actual depicted sex but totally naked man hugs half-naked woman in a movie within the movie, woman takes off her top in front of man, woman invites man up to her room, a reference to self-abuse, and woman tries to kiss man but he says he promised his friend he wouldn’t get involved with her; full male nudity during a scene in a movie within the movie and upper female nudity in two scenes; alcohol use and apparent drunkenness (character gets sick later); smoking; and, practical jokes and pranks.

BAGHEAD is a low-budget horror comedy. Rated R for its strong foul language and brief nudity rather than its violence, the movie is somewhat experimental in its comic tone, so it may not attract modern-day horror fanatics, especially those who love to wallow in gore and blood.

The story opens at the showing of an independent movie being watched by two couples. In the last scene of the movie, a man gets totally naked for the girl he loves, who takes off her top.

The four people watching the movie, all of who are struggling actors, are inspired by what they saw. Matt, the handsome leader of the group, convinces his best friend Chad, Catherine and Michelle to go up to his parents’ isolated cabin in the mountains outside Los Angeles, where they will write a script for a movie where they all can star.

At the cabin, it becomes obvious that these actors are not writers. In fact, only Matt seems to be inspired about the project. Complicating matters is the fact that Chad likes Michelle, but Michelle likes Matt, and Catherine wants to get back together with Matt, but Matt considers their old relationship to be over.

That night, Michelle is actually visited in her room by a man with a bag over his head. She thinks it’s Matt trying to play a joke on her. So, she takes off her top, but the man leaves the room.

Downstairs, Michelle accuses Catherine of playing this prank on her, but Catherine denies it. The next morning, Catherine disappears and so does Chad. And, the battery goes missing from Matt’s car, their only transportation back to civilization.

Is someone really stalking these four actors, or is this just a series of elaborate pranks in danger of going wrong?

This story takes a while to lift off, but it offers some surprises once it gets going. And, the last couple scenes are surprisingly touching. The editing, photography and camerawork are decidedly low budget, however.

BAGHEAD veers from comic horror to scary horror, but there’s not much actual violence in the movie. In fact, there is no gore and only a very little bit of blood. Thus, the filmmakers rely more on potential violence to generate the movie’s thrills, which include comic thrills, scary thrills and suspenseful thrills. Its not the scary moments nor the violence, therefore, that make the movie’s content excessive, it’s the full male nudity in the shot from the movie within the movie at the beginning, the shots of upper female nudity in two scenes and the strong foul language throughout the dialogue.