You have reached the cached page for https://www.amazon.com/Bad-Times-at-El-Royale/dp/B07J57YBFP
Below is a snapshot of the Web page as it appeared on 11/28/2021 (the last time our crawler visited it). This is the version of the page that was used for ranking your search results. The page may have changed since we last cached it. To see what might have changed (without the highlights), go to the current page.
You searched for: Bad Times at the El Royale We have highlighted matching words that appear in the page below.
Bing is not responsible for the content of this page.
Watch Bad Times at the El Royale | Prime Video 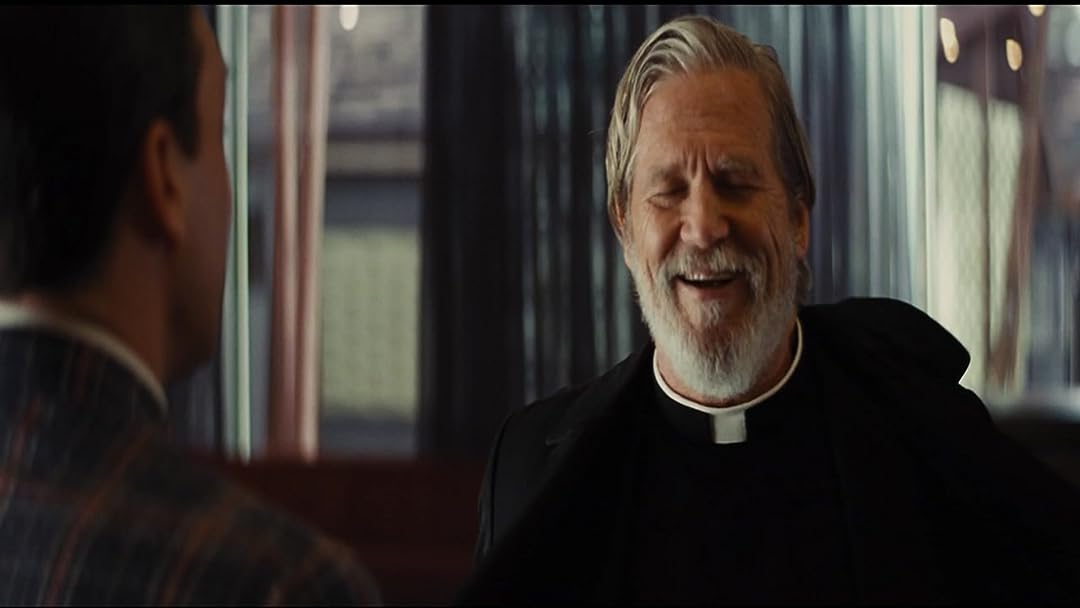 Bad Times at the El Royale

M. FosterReviewed in the United States on December 23, 2018
5.0 out of 5 stars
Goddard splits the difference between Nevada, California, and YOU (dun-dun-DUUNN!!)
Verified purchase
Upon seeing this movie, I was reminded of the time I wrote a book report in the 6th grade about Orwell's Animal Farm. After I blandly described the events and cast of characters to my classmates, Mrs. Camp knelt discretely at my desk and asked, "you know that book is about communism, right?”

I did not. Similarly, it is easy to miss the overarching message of Bad Times at the El Royale (and not just for 6th graders).

There are several story lines housed in the vacancies of the El Royal-- a formerly prestigious Lake Tahoe hotel whose claim to fame is that it is split by the border of California and Nevada. The division of the hotel is dramatized by a conspicuous red line demarcating the California and Nevada sides. The hotel itself is a character in the film with history, secrets, and contradictions of its own.

Set circa late 1960's, we are introduced to the characters as glaring stereotypes. I rolled my eyes in skepticism, but the esteemed cast and remarkable scenery kept me from cutting it short, and I was rewarded in spades.

No spoilers-- there are several intriguing sub-plots in which we see vast dissonance in the lives of each character. Each possesses ambiguity and paradox of opposites, emphasized by the rifting values in the middle of the 20th century. One of the storylines involves J Edgar Hoover's powerful hold as the director of the FBI for 48 years-- his public facade was one of moral rectitude, but time has revealed that he used blackmail and fraud to secure his notorious reign. Hoover also had a mysterious private life that contrasted his righteous indignation-- but no matter how corrupt or hypocritical anyone might be, each of us is entitled to peaceful fulfillment of our human needs, even amongst all our contradictions.

But I digress. The guests of the El Royale each takes a room on the Nevada side (incidentally, Nevada has been a crucial swing state in recent elections) and begin to reveal their many secrets. We are kept on the edge of our seats as violence and suspense punctuate the absurd, fascinating mingling of circumstances and relationships between the characters.

This film was stunning to look at, well executed, and extremely entertaining-- but I think there is a message that Goddard conveys about the present state of politics and relationships in America. And in ourselves. As human beings, each of us possesses the potential for great harm and suffering in equal amounts generosity and joy. Fear, regret, shame, greed, and insecurity can lead to devastating destruction of lives, but honesty, acceptance, communication, and even protest can foster optimism, growth, and peace. Archetypes are easy targets— as Americans, we often see each other as reds vs blues and we dig our heels in against one another because it is easier to see Others as bad guy enemies. But the truth is, each of us is multifaceted, and most of us are just doing the best we can to provide a sustainable standard of living for ourselves and our loved ones.

Bad Times at the El Royale shatters archetypes as Goddard reveals the complexity and simplicity of our layers— strangely, we are all the same in that we are different.

So, yeah. This one’s in my library. Recommended.

Joey McManusReviewed in the United States on December 23, 2018
5.0 out of 5 stars
Blown Away
Verified purchase
I do not get the bad reviews or why this movie did not get more recognition. It has a great ensemble cast, beautiful cinematography, and a fun story with a lot of twists and turns told in an inventive way. There is also beautiful singing by one of the leads (a Tony winner) that adds to the movie and is relevant to the plot. Action packed and just a really fun movie. Nicely surprised by this one.
117 people found this helpful

RichReviewed in the United States on January 3, 2019
1.0 out of 5 stars
Everybody Wants To Be The Next Tarantino
Verified purchase
Wow, Drew Goddard missed the target on this one. I'm really surprised too because I love "The Martian" and "The Cabin in the Woods". I'm definitely disappointed in this movie because it starts out with a good pace and it keeps you intrigued, but then it fizzles quickly after about 45 minutes, and then you have to suffer through the last 96 minutes, which feels like an eternity and you just want it to be over! This was also a complete ripoff of "The Hateful Eight". Everyone has a secret, everybody shows up at different times, and nobody can be trusted. (Interested yet? Sound familiar?) Everybody wants to be the next Tarantino where you show a movie out of order and pull it all together nicely at the end, but he failed at that too. I wish I could say, "I highly recommend this, but I don't recommend it at all!"
55 people found this helpful

LancaReviewed in the United States on December 23, 2018
5.0 out of 5 stars
Loved This Movie
Verified purchase
Actors and acting was good. Very interesting, thrilling story that unfolds in layers. It is especially interesting if you are a Boomer and familiar with history- many parallels (Manson, Hoover, Kennedy, girl groups, Vietnam). Loved the music and very period appropriate.The 4 generations of gorgeous men actors are a delight. Lewis Pullman (Bill Pullman's- of Independence Day-son) was great. Ladies also wonderful. A must see.
47 people found this helpful

M. OlesonReviewed in the United States on October 26, 2018
4.0 out of 5 stars
3 1/2 stars. Stylized images, nifty story and quirky characters
Theater review. Possible spoilers. Director and writer Drew Goddard has a fairly lean bio behind the camera. His only other feature-film directing credit is the very good horror flick, “The Cabin in the Woods” from 2012. Here he does a pretty good imitation of Quentin Tarantino (think “The Hateful Eight”).

The film opens in 1968 in a dingy room at the El Royale, a Lake Tahoe hotel that is built on both sides of the Nevada/California border. A man (Nick Offerman) tears up the floor of the room and deposits a leather valise. He is then killed by another man who he appears to know. It’s all mysterious at this point, but Goddard will go back and fill in the blanks later in the film.

Springboard ahead 10 years and people begin to show up one by one at the now mostly deserted hotel for a stay. First is a vacuum salesman, Laramie Sullivan (Jon Hamm), then a priest, Father Flynn (Jeff Bridges), then a lounge singer named Darlene Sweet (Cynthia Erivo). Later Emily Summerspring (Dakota Johnson) and her kidnapped sister, Rose (Cailee Spaeny). The only employee at the hotel is Miles Miller (Lewis Pullman), who seems shy and eager to do his job – including a telling of the hotel’s history to each of the guests. One could easily put the pieces together and assume that the contents of the buried bag have brought the group together. Still, we’re not sure who is real and who is pretending to be someone else.

The charm of the film up to this point is the theme and the cool set pieces of the hotel. It turns out that the hotel had long been more than just a typical place to rest for the night. It is equipped with sophisticated monitoring capabilities and hidden passageways and a secret history that goes beyond being a hangout for Sinatra’s gang in the 1960’s.

The story then begins to bog down, once we have the set up. For example: Father Flynn and Darlene are having a piece of pie in the lobby. Flynn wants a drink. Darlene doesn’t. But each time Flynn goes to the bar, brings back a bourbon, he goes back for another. And again entices Darlene. This goes on for 7 or 8 minutes until Darlene relents. Things pick up again when one of the guests is garishly killed. Goddard takes us back to the killing several times, each from the perspective of each of the guests. That seems to be a tip of the hat to the various film versions of “Murder on the Orient Express.” It was insightful and fun. Then things slow down again. This time with some stilted dialog and the arrival of Billy Lee, a golden haired, pretty boy, cult leader played with panache by Chris Hemsworth. The final act is a bit too much and seems mostly responsible for the film’s unnecessary 141 minute running time.

What makes the less that perfect film work is the performances of the actors and the singing of one, specifically Erivo, a Tony winning actress for “A Color Purple.” She has quite a voice. Bridges shows why he is one of the best actors of his generation and Pullman does a nice job with his role as an isolated man looking for redemption. The film is worth a look for the stylized images, nifty story and quirky characters.
64 people found this helpful

Jessica MaconReviewed in the United States on December 20, 2018
1.0 out of 5 stars
The movie is not worth seeing.
Verified purchase
This movie sucked. The singing was annoying. The acting and accents were bad all around. It is too slowly paced.
34 people found this helpful

Amazon CustomerReviewed in the United States on December 21, 2018
1.0 out of 5 stars
Can I return a digital purchase?
Verified purchase
How did this get made? It has no redeeming qualities. It's so bad that I'm actually angry
34 people found this helpful

YesReviewed in the United States on January 2, 2019
1.0 out of 5 stars
Tragically Bad
Verified purchase
One of the worst films made in the last decade. Tragic that Jeff Bridges was in this, the Dude went Dud. The script was thinner and more brittle than a mica sheet. Acting - hardly necessary since nothing could’ve supported the two line plot. Made for slow teens.
14 people found this helpful
See all reviews
Back to top
Get to Know Us
Make Money with Us
Amazon Payment Products
Let Us Help You
EnglishChoose a language for shopping. United StatesChoose a country/region for shopping.
© 1996-2021, Amazon.com, Inc. or its affiliates