You have reached the cached page for https://www.imdb.com/title/tt0103752/
Below is a snapshot of the Web page as it appeared on 11/16/2020 (the last time our crawler visited it). This is the version of the page that was used for ranking your search results. The page may have changed since we last cached it. To see what might have changed (without the highlights), go to the current page.
You searched for: Back in the U.S.S.R. movie We have highlighted matching words that appear in the page below.
Bing is not responsible for the content of this page.
Back in the U.S.S.R. (1992) - IMDb
FULL CAST AND CREW | TRIVIA | USER REVIEWS | IMDbPro | MORE LESS
0Check in
X I'm Watching This!
Keep track of everything you watch; tell your friends. 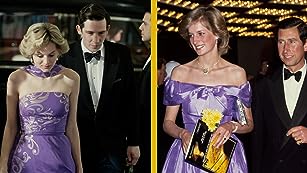 Gillian Anderson, Emma Corrin, and Josh O'Connor pick their favorite costumes in Season 4 of "The Crown."

Search for "Back in the U.S.S.R." on Amazon.com

During Gorbatchov's perestroika, Archer Sloan, a Chicago student, visits Moscow while the Soviet Union is changing from Communist to Wild West capitalist society. Purely by bad luck, he becomes a pawn in a dangerous cat and mouse game for a black Madonna, a precious icon, which was stolen from Russian Orthodox clergy by the quickly rising, rich and corrupt Russian mafia, and then by a black market-girl he followed just as a flirt who didn't know herself what she nicked. The well-connected mobsters find him and threaten his life in no time, and the US embassy isn't very helpful, worse, it's also infiltrated... Written by KGF Vissers

After the credits, there is a brief silent shot of a crowd of Russian people, smiling and waving at the camera. See more »

Nothing special but a fairly entertaining movie. Several Ruskie groups want a valuable artifact they believe a innocent tourist has, and will stop at nothing to get it, thus making life miserable for the flabbergasted visitor. Whaley was good as the continually upset tourist; seems like he is always playing the sniveling wimp who blows his top only to immediately begin apologizing.