You have reached the cached page for https://www.prestomusic.com/classical/products/8791267--francis-pott-at-first-light-word
Below is a snapshot of the Web page as it appeared on 11/25/2020 (the last time our crawler visited it). This is the version of the page that was used for ranking your search results. The page may have changed since we last cached it. To see what might have changed (without the highlights), go to the current page.
You searched for: At First Light We have highlighted matching words that appear in the page below.
Bing is not responsible for the content of this page.
Francis Pott: At First Light; Word - Naxos: 8573976 - CD or download | Presto Classical Skip to main content 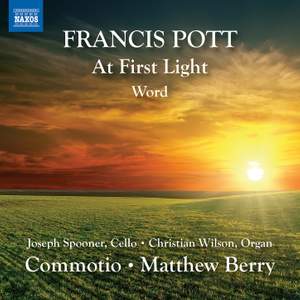 Every now and then you hear a new work and feel that excitement, the knowledge that here is a piece that is going to become part of the landscape. Rooted in tradition but with a voice of its... — Gramophone Magazine, September 2020 More…

What are FLAC and MP3?

V. This Day Has Ended

VII. God of Compassion Who Dwells on High

II. In the Beginning Was the Word, and the Word Was with God

III. In the Beginning Was the Word. What Word?

IV. What Has Come into Being in Him Was Life

V. I Have Seen the Sun Break Through

VI. He Was in the World, and the World Came into Being Through Him

VII. And to One God Says, Come to Me by Numbers and Figures

VIII. You Must Put Your Knowledge Off and Come to Me with Your Mind Bare

IX. But to All Who Received Him, Who Believed in His Name

XI. And the Word Became Flesh and Lived Among Us

XIII. Enough That We Are on Our Way

XIV. And the Word Became Flesh and Lived Among Us

Francis Pott’s acclaimed musical voice is one of uncommon eloquence and seriousness of purpose, and his works have been performed and broadcast in over 40 countries. This recording presents world premiere recordings of two major pieces. At First Light is a memorial work which takes the form of a series of slow meditations surrounding an exuberant motet, with wordless commentary from a lamenting cello. Word, with its significant role for the organ and the inclusion of texts by the Welsh priest and poet R.S. Thomas, reveals Gospel contemplation in a postmodern world.

Every now and then you hear a new work and feel that excitement, the knowledge that here is a piece that is going to become part of the landscape. Rooted in tradition but with a voice of its own, immediately appealing but refusing to reveal everything at first listen, Francis Pott’s At First Light – recorded here for the first time by the Oxford-based chamber choir Commotio – is one such piece.