You have reached the cached page for https://pagesix.com/2019/09/25/ashton-kutcher-holds-back-on-snarky-tweet-after-demi-moores-explosive-claims/
Below is a snapshot of the Web page as it appeared on 10/26/2020 (the last time our crawler visited it). This is the version of the page that was used for ranking your search results. The page may have changed since we last cached it. To see what might have changed (without the highlights), go to the current page.
You searched for: Ashton Kutcher We have highlighted matching words that appear in the page below.
Bing is not responsible for the content of this page.
Ashton Kutcher appears to respond to Demi Moore's memoir claims Skip to main content 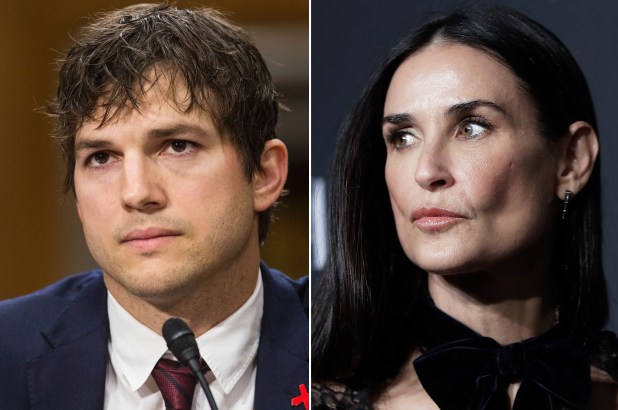 Demi Moore says she 'changed' herself for her marriages

Ashton Kutcher had everything — and nothing — to say in the wake of the explosive claims his ex-wife, Demi Moore, made about him in her new memoir.

Without specifically calling out Moore, the former “That ’70s Show” star admitted on Twitter that he had a pointed message to send, but decided to withhold it for the sake of his family.

“I was about to push the button on a really snarky tweet,” the 41-year-old tweeted late Tuesday. “Then I saw my son, daughter, and wife and I deleted it. ❤️”

Kutcher and Mila Kunis, his wife of four years, share two children: daughter Wyatt and son Dimitri. He and Moore, 56, were married from 2005 to 2013.

Kutcher ended his Twitter message by quoting his father, Larry Kutcher, and writing, “Life is good.”

He later tweeted a phone number and told followers to text it “for truth.”

In Moore’s memoir, “Inside Out,” she made a number of bombshell claims about Kutcher, even saying she relapsed after he allegedly claimed alcoholism wasn’t “a real thing.”

“Ashton was enjoying a glass of good red wine when he said, ‘I don’t know if alcoholism is a real thing — I think it’s all about moderation,’” she writes in her tell-all book. “I wanted to be that girl. The girl who could have a glass of wine at dinner, or do a tequila shot at a party. In my mind, Ashton wanted that, too. So I tried to become that: a fun, normal girl.”

The “Ghost” star also claimed Kutcher used the threesomes they had during their relationship to explain away his infidelity.

Kutcher has not directly commented on the book.

Steven Van Zandt cancels most of tour due to illness