You have reached the cached page for https://reverb.com/item/35358461-syndrum-inventor-joe-pollard-s-original-syndrums-twin-electronic-drums
Below is a snapshot of the Web page as it appeared on 9/19/2020 (the last time our crawler visited it). This is the version of the page that was used for ranking your search results. The page may have changed since we last cached it. To see what might have changed (without the highlights), go to the current page.
You searched for: Are electronic drums considered electronic drums? We have highlighted matching words that appear in the page below.
Bing is not responsible for the content of this page.
Syndrum Inventor Joe Pollard's Original Syndrums | Reverb 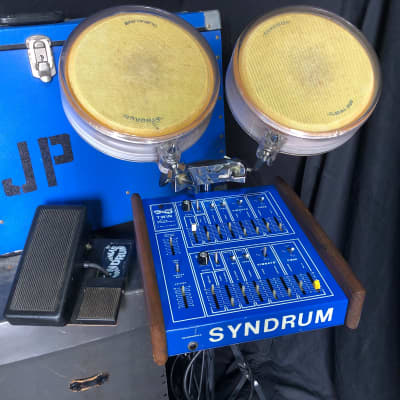 Joe Pollard, a well respected Los Angeles session and touring drummer, became one of the most influential drummers of the1970s. It was however his innovation, rather than his playing that inspired countless drummers and helped define an entire era of popular music. In 1976 Pollard invented the Syndrum, the first commercially available electronic drum and arguably the most influential drum innovation since the creation of the drum set. Syndrums introduced the world to electronic drums. Almost overnight the Syndrum’s unmistakable pitch bending tom sounds were featured on recordings by the top artists of the era including Linda Ronstadt, Barbra Streisand, Rod Stewart, Queen, Dolly Parton, The Who, The Cars, Bad Company and countless others. They practically defined the Disco sound that was exploding all over the world at the time. The first version of Pollard’s Syndrum was known as “The Quad” and included four, 8" electric pads connected to a 4 channel controller. There were no pre-set sounds but each channel gave the user full range of tone, sustain, pitch bend and noise controls. The Syndrum could create an almost endless variety of sounds but it’s pitch drop tom voice was the sound that really caught the attention of the music world. As the the Syndrum rapidly grew in popularity, Pollard’s company, Pollard Industries released “The Twin” that you see here, a two pad version of the already popular Quad. This was Pollard's personal set, used on countless recording sessions. The set is in excellent condition. I've gone through it and to the best of my ability to test, it appears that everything still works great. All the classic Syndrum sounds are right at your fingertips. Most of the knobs on the sliders are missing but the sliders work fine. The photos depict the condition accurately. Includes the controller, 2x pads, all wires, power cord, stand, mounting bracket, foot pedal and head tightening tool.
Acoustic drum set and case in photo is not included. Consider this Syndrums Twin as the holy grail of vintage electronic drums. This is the personal set belonging to the man who created and introduced electronic drums to the world. Includes COA signed by Pollard's wife. Case and acoustic drums in the photos are not included. This Syndrum Twin belonging to Joe Pollard will be featured in my "Donn Bennett's Drum Vault" column in Modern Drummer Magazine's October 2010 issue.

This item is sold As-Described

This item is sold As-Described and cannot be returned unless it arrives in a condition different from how it was described or photographed. Items must be returned in original, as-shipped condition with all original packaging.

Oops, looks like you forgot something. Please check the fields highlighted in red.