You have reached the cached page for https://www.britannica.com/biography/Jack-LaLanne
Below is a snapshot of the Web page as it appeared on 10/22/2020 (the last time our crawler visited it). This is the version of the page that was used for ranking your search results. The page may have changed since we last cached it. To see what might have changed (without the highlights), go to the current page.
You searched for: Alcatraz Island We have highlighted matching words that appear in the page below.
Bing is not responsible for the content of this page.
Jack LaLanne | American television personality | Britannica
Jack LaLanne
Article Media Additional Info

During his childhood, LaLanne suffered from poor health and erratic behaviour, which he would come to believe was caused by a sugar addiction. As a teen, he attended a lecture by nutritionist Paul Bragg, after which LaLanne cut sugar from his diet and embarked on an exercise routine. These lifestyle changes would come to define his decades-long quest to promote healthy living in America. In 1936 he opened the first public health club (later a chain) in the United States, located in Oakland, California. Among his other innovations, LaLanne originated the leg-extension machine, now a fitness standard.

In 1951, with the debut of The Jack LaLanne Show, LaLanne became the first host of a televised exercise program. When the show went into syndication in the late 1950s, LaLanne became the face of fitness for viewers across the United States. The program ran for decades, its popularity aided by the feats of showmanship that LaLanne used to advertise the benefits of peak physical condition. These included two handcuffed swims from Fisherman’s Wharf in San Francisco to Alcatraz Island—the second time at age 60 and towing a boat behind him—and a record-setting bout of more than 1,000 push-ups in 23 minutes. After his show completed its run in 1985, LaLanne continued to appear as a motivational speaker and on television, most notably in infomercials touting various products, including his own juicer. 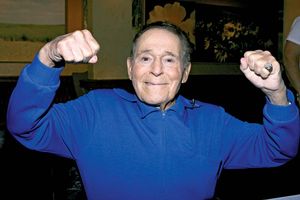