You have reached the cached page for https://www.amazon.com/Ace-Ventura-Detective-Jim-Carrey/dp/0790732157
Below is a snapshot of the Web page as it appeared on 10/17/2020 (the last time our crawler visited it). This is the version of the page that was used for ranking your search results. The page may have changed since we last cached it. To see what might have changed (without the highlights), go to the current page.
You searched for: Ace Ventura: Pet Detective We have highlighted matching words that appear in the page below.
Bing is not responsible for the content of this page.
Amazon.com: Ace Ventura: Pet Detective: Jim Carrey, Courteney Cox, Sean Young, Tone Loc, Dan Marino, Noble Willingham, Troy Evans, Raynor Scheine, Udo Kier, Frank Adonis, Tiny Ron, David Margulies, Tom Shadyac, Bob Israel, Gary Barber, James G. Robinson, Peter Bogart, Jack Bernstein, Jim Carrey, Tom Shadyac: Movies & TV 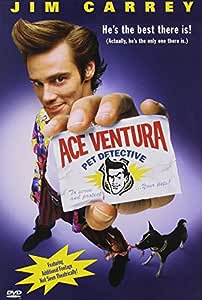 The goofy sleuth sets out to find the Miami Dolphins' missing mascot, Snowflake.

The 1994 box-office hit that turned comedy maniac Jim Carrey into Hollywood's first $20-million man, this gag-filled no-brainer stars Carrey as the titular rubber-faced gumshoe who tracks down lost pets for his heartbroken clients. Ace's latest case involves the apparent kidnapping of the Miami Dolphins' team mascot, Snowflake the dolphin (natch). His investigation is a source of constant aggravation for Miami police lieutenant Lois Einhorn (Sean Young), who turns out to be packing more than a pistol under her skirt. Friends fans will appreciate the presence of Courtney Cox, who remains admirably straight-faced as the Dolphins' publicist and Ace's would-be girlfriend, but of course it's Carrey who steals the show with shameless abandon. One viewing may suffice for a lot of people, but Carrey's hyper antics have made Ace Ventura: Pet Detective one of the bestselling videos of the 1990s. --Jeff Shannon

4.6 out of 5 stars
4.6 out of 5
2,374 global ratings
How are ratings calculated?
To calculate the overall star rating and percentage breakdown by star, we don’t use a simple average. Instead, our system considers things like how recent a review is and if the reviewer bought the item on Amazon. It also analyzes reviews to verify trustworthiness.

Stacy
1.0 out of 5 stars I hate this movie.
Reviewed in the United States on December 29, 2018
Verified Purchase
I hate this movie. My kids love it. They talk to me out of thier butt now. They keep saying “like a glove”. I blame their father.
Read more
31 people found this helpful
Helpful
Comment Report abuse

Hamburger
5.0 out of 5 stars Missing a favorite scene
Reviewed in the United States on June 16, 2014
Verified Purchase
This is an all time favorite movie of ours. But, this Amazon version had a scene cut out. The scene is where Jim Carrey, talks to reporters, pretending he is a dolphin trainer. We're not sure if any other scenes were skipped. We feel a bit cheated. Thanks, Hoover family
Read more
42 people found this helpful
Helpful
Comment Report abuse

Just Rosie
5.0 out of 5 stars Great movie, but missing a scene 🐬🎬
Reviewed in the United States on September 15, 2019
Verified Purchase
Only one beef with this. One of our favorite scenes was cut out, what the heck?? Snowflakes empty tank scene. Why would they do that??? Other than that, love this movie🐬🎬🐾📽💞📽🎬🐾🐬
Read more
3 people found this helpful
Helpful
Comment Report abuse

vince west
5.0 out of 5 stars Ace Ventura Pet Detective DVD
Reviewed in the United States on June 20, 2020
Verified Purchase
Before Jim Carrey lost it this was one of his funniest movies. Ace is the only pet detective in the world. He is fairly odd but good at his job. The police make fun of and tease him nonstop. Before a Superbowl the Miami Dolphins star half-time dolphin goes missing as well as Dan Marino. Ace is hired to find them. He deals with killer sharks, transvestites, stays at mental hospital and lots more. VERY funny. Surprise ending.
Read more
Helpful
Comment Report abuse

Leslie
5.0 out of 5 stars Ace Ventura
Reviewed in the United States on April 1, 2019
Verified Purchase
Loved this movie as a kid and introduced my
Kids to it. Now they are saying “allllrighty then” and have watched it several times.
Read more
3 people found this helpful
Helpful
Comment Report abuse

John D. Mcglynn
1.0 out of 5 stars A BluRay Disappearing Act
Reviewed in the United States on June 29, 2014
Verified Purchase
I love the original DVD release - absolutely loved it. Jim Carrey is quite often, over-the-top obnoxious, but it's well balanced throughout and he mostly comes off as just fall-off-of-your-seat hysterically funny. So... why one-star instead of five? Because whatever idiots edited the Blu-Ray release left out one of the funniest scenes in the movie! Why, I have no idea. I am speaking of the scene, immediately following Carrey's "Star Trek" parodies in the missing dolphin's ("Snowflake, the Miami Dolphin's mascot and trick performer) empty tank. In front of a media crowd, Carrey ad-libs as a "Siegfrid/Roy" type European dolphin trainer/cetacean behaviorist, who taunts the media crowd with "do you KNOW Snowflake? Do you have a dorsal fin? Pahh!, etc." It's there in the DVD - and gone in the BluRay... WHY?
Read more
17 people found this helpful
Helpful
Comment Report abuse

Andi
4.0 out of 5 stars Literally one of the funniest movies I've ever seen!
Reviewed in the United States on September 7, 2019
Verified Purchase
I immediately knew they cut one of my favorite scenes from this release, though....where Ace is pretending to be the dolphin trainer. Was super disappointed as I was introducing my nephew to this masterpiece of comedy. Otherwise, this would be five stars.
Read more
Helpful
Comment Report abuse
See all reviews

Stampy
5.0 out of 5 stars what a comedy should be
Reviewed in the United Kingdom on January 14, 2009
Verified Purchase
Pet detective Ace Ventura (Carrey) is assigned to track down Snowflake,
the mascot of football team The Dolphins before the Superbowl.

Jim Carrey, the man. Whether you love him or hate him you cannot deny
his comic talent. In this 1994 crime comedy he plays a smart crazy pet
detective who has the best catchphrases of any character, of any
comedy, of any film, of anyone, ever.

Opening with a delivery man kicking a package and destroying it with
every step he takes and you feel as if you know this person and you
simply have to love him for it. His character never slackens, always
entertains and gets funnier with every scene. He is a comic master and
he is this film.

Carrey's performance does take the shine off a well written plot. The
script is a great incentive for Ventura to be wacky and spontaneous.

The pursuit of a missing dolphin is interesting, if not quite as
intense as it should be. We see Ventura using his 'skill' and his
'charm' to give the older viewers plenty of laughs where the slapstick
moments are undoubtedly aimed towards younger generations, however
years on it is still as funny as when I was young. The sarcastic yet
sophisticated undertones still remain classic.

Flowing all the way through, this nineties comedy follows the mad
detective in an intriguing investigation. There are lapses in the
majority of modern comedies where the stereotypical hero has to redeem
himself to find the answer and everything is super come the final piece
but there are many twists and turns and a difference in the comic
formulaic style here which gives the film a uniqueness that required
Carrey's special touch. No clichés, stereotypes or cringing romance
sequences that don't shine off the plot, unless you count the atrocious
made for money sequel.

The supporting cast are good enough to add some extra laughs but they
are always standing in Carrey's superior shadow.

Sharp, witty and exceptionally funny, Ace Ventura: Pet Detective
justifies the genre and is worth watching whatever age you may be.

rich20
5.0 out of 5 stars Still a great film
Reviewed in the United Kingdom on December 5, 2013
Verified Purchase
I've seen Ace Ventura when nature calls many times and watched the entire cartoon series as a kid, but I don't recall in having seen this film so I went ahead and bought it.

This is a great film, and I think is a typical Jim Carrey character in the way he acts, his manerisms etc. and that's what I love about his movies.

There is a genuine story line in this and I think the film and Jim Carrey to a good job at sticking to it and making it obvious with what's going on. There's also many funny moments which don't feel like they've aged too badly.

Stephanie Calman
5.0 out of 5 stars Fantastic Carrey caper
Reviewed in the United Kingdom on August 22, 2013
Verified Purchase
My kids aged 14 and 15 first saw this years ago and really loved it, so I've got us a copy to watch together. As they get older there are fewer and fewer films they will willingly watch with us old parents so I'm delighted to be looking forward to it. Having just seen Carrey unrecognisable as 'Stars & Stripes' in Kick Ass 2, I am in awe of his unique talent.
Read more
Report abuse
See all reviews

Page 1 of 1 Start overPage 1 of 1
This shopping feature will continue to load items when the Enter key is pressed. In order to navigate out of this carousel please use your heading shortcut key to navigate to the next or previous heading.
Back
Next
Pages with related products. See and discover other items: pet detective