You have reached the cached page for https://www.amazon.com/Few-Good-Men-Special/dp/B00005B6JZ
Below is a snapshot of the Web page as it appeared on 10/9/2020 (the last time our crawler visited it). This is the version of the page that was used for ranking your search results. The page may have changed since we last cached it. To see what might have changed (without the highlights), go to the current page.
You searched for: A Few Good Men We have highlighted matching words that appear in the page below.
Bing is not responsible for the content of this page.
Amazon.com: A Few Good Men (Special Edition): Tom Cruise, Jack Nicholson, Demi Moore, Kevin Bacon, Wolfgang Bodison, Kiefer Sutherland, Kevin Pollak, Rob Reiner, Rob Reiner, David Brown, Andrew Scheinman, Castle Rock Entertainment; Columbia Pictures Corporation: Movies & TV 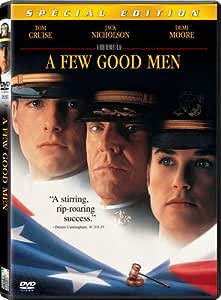 Tom Cruise, Jack Nicholson and Demi Moore star in Rob Reiner's unanimously acclaimed drama about the dangerous difference between following orders and following one's conscience. Cruise stars as a brash Navy lawyer who's teamed with a gung-ho litigator (Moore) in a politically explosive murder case. Charged with defending two Marines accused of killing a fellow soldier, they are confronted with complex issues of loyalty and honor, including its most sacred code and its most formidable warrior (Nicholson). Superbly directed with a trio of powerhouse performances and an outstanding supporting cast including Kevin Pollak, Kiefer Sutherland and Kevin Bacon.

4.8 out of 5 stars
4.8 out of 5
3,189 global ratings
How are ratings calculated?
To calculate the overall star rating and percentage breakdown by star, we don’t use a simple average. Instead, our system considers things like how recent a review is and if the reviewer bought the item on Amazon. It also analyzes reviews to verify trustworthiness.

For me, “A Few Good Men” is a film that has it all. In addition to its all-star cast, it features an almost perfectly written screenplay by Aaron Sorkin, and expert direction by Rob Reiner.

For those not familiar with “A Few Good Men,” it is a legal/courtroom drama about a young, supercilious Navy lawyer, Lieutenant Daniel Kaffee (Cruise). With no courtroom experience at all, Kaffee is assigned to defend two young enlisted Marines (played by Wolfgang Bodison and James Marshall) accused of murdering another Marine. Kaffee and his co-counsel, Lieutenant Sam Weinberg (Pollack), are both being closely monitored by Lieutenant Commander Jo Galloway (Moore), a Navy Internal Affairs lawyer.

As the case unfolds, big problems loom for Kaffee, Weinberg, Galloway, and the two accused Marines. The alleged murder was committed at the Marine Corps base in Guantanamo, Cuba. The commanding officer there is Colonel Nathan Jessup (Nicholson), a politically well-connected senior officer who’s about to be promoted to a staff position inside the White House. Marine Captain Jack Ross (Bacon), the prosecutor in the case, initially appears receptive to making a plea deal, but then suddenly backs away. A Marine Corps counter-intelligence officer (Walsh) and an untrustworthy platoon leader (Sutherland) further complicate matters for Kaffee and his legal team, who face an ever-increasing number of legal obstacles to securing an acquittal for their clients…

I can always count on “A Few Good Men,” with its superb cast, beautifully crafted story, and tremendous production values, to provide me with two-plus hours of wonderful entertainment. I’ve watched it dozens of times over the past quarter-century, and I never tire of it. It’s always a pleasure for me to sit down, fire up my Blu-ray player, HDTV, and surround-sound home theater system, and view this marvelous film in glorious high definition. Most highly recommended.

I first saw this movie during its initial theatrical release in 1992, and felt then, as I do now, that it was a superior combination of murder mystery and court-room drama — it has, most definitely, aged VERY well. (Plus, it was nearly worth the price of the disc just to see all of the principal actors/actresses (and many of the supporting cast — most of whom I had forgotten were even in the movie) in their, relatively, rosy-cheeked youth.) See the other reviews for more detail and/or other opinions regarding the plot of the movie.

Overall, the images in this movie are mostly sharp, with fairly good shadow detail. However, the entire film appeared slightly soft, and lacking in fine detail — as was evident in many of the close-ups of faces and clothing. I'm sure that the evident softness of the transfer is due mostly to the use of the MPEG-2 codec to encode the movie. Otherwise, there were no other major picture anomalies (such as: specks, hair-lines, white dots, color fluctuations, etc.) to mar the image. Lastly, this movie's picture quality, while decent, is another example of the learning curve that was encountered by those who transferred movies to blu-ray in the early days of the format: that is, usually at least adequate, but could be better (nothing that a remastering using current techniques and technology couldn't fix).

I only listened to the LPCM track. This movie has hardly any bass, nearly no activity nor directionality in the surround channels, and no ambient sounds to speak of — but, it does have clear well-placed dialog and well recorded music. For what it is (i.e.—dialog heavy, no explosions, and very little surround activity), this is an adequate soundtrack, which fits very well with the style and content of the movie.

None of the extras were reviewed.
Read more
10 people found this helpful
Helpful
Comment Report abuse
See all reviews

Melvin (Nicholson): Well, maybe I overshot a little, because I was aiming at just enough to keep you from walking out."

Bridget
5.0 out of 5 stars Great Film
Reviewed in the United Kingdom on September 18, 2017
Verified Purchase
One of my firm favourites.Used to have this film years ago on video. Some extremely good acting by Jack Nicholson. Especially in the courtroom. Tom Cruise manages to pull it off as well as a lawyer. Demi Moore comes across as snooty at first, however the rest of the team appear to mellow her personality. Therefore a great team is formed. A very gripping film, which comes together at a great easy to follow pace.
Read more
3 people found this helpful
Report abuse

Galada
3.0 out of 5 stars A tense and entirely credible thriller
Reviewed in the United Kingdom on July 11, 2019
Verified Purchase
The theme (vicious bullying in the Marines) is distasteful and I thought I'd hate this film. But the acting is first-rate, the plot is both surprising and credible and one feels at the end that in some sense justice has been done. A strong screenplay. One feels that the atmosphere is utterly authentic and the psychology in the behaviour of the characters is penetrating. Remarkable to make such a viewable film out of such repulsive material.
Read more
Report abuse

Nigel R.
5.0 out of 5 stars A timeless classic
Reviewed in the United Kingdom on January 18, 2020
Verified Purchase
I would highly recommend this movie to anyone that appreciates film making at its very best.
With a distinguished cast in very believable roles, its joy to watch now, as it was on its release back in 1992, in a word - superb
Read more
Report abuse
See all reviews

Page 1 of 1 Start overPage 1 of 1
This shopping feature will continue to load items when the Enter key is pressed. In order to navigate out of this carousel please use your heading shortcut key to navigate to the next or previous heading.
Back
Next
Pages with related products. See and discover other items: Explore fourths of july games for adults, Explore electronics for man