You have reached the cached page for https://marvelcomicsfanon.fandom.com/wiki/Steven_Rogers_(Earth-1315)
Below is a snapshot of the Web page as it appeared on 3/31/2021 (the last time our crawler visited it). This is the version of the page that was used for ranking your search results. The page may have changed since we last cached it. To see what might have changed (without the highlights), go to the current page.
You searched for: 2025年 wikipedia steven rogers biography We have highlighted matching words that appear in the page below.
Bing is not responsible for the content of this page.
Steven Rogers (Earth-1315) | Marvel Fanon | Fandom 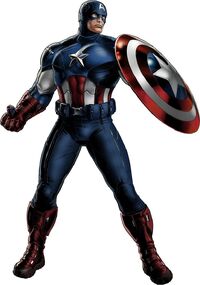 Earth-1315
Base Of Operations
The Triskelian
Characteristics
Gender

Steve was born sometime in 1924, his father was in WWI and served with Logan but died of shell shock when before Steve was born so Steve grew up without a father and without knowing how to fight. When Steve was 4 his mother died of an unknown disease

and Steve had to move into an orphanage, Steve was picked on through most of his life. In 1936 when Steve was 12 he was being bullied by other children and Steve decided enough was enough and fought back but failed miserably until the 10- year-old James Barnes came to help him, from then on Steve and James became friends and Steve nicknamed him "Bucky".

. After finding out Bucky got in and enlisted, Steve was devastated and jealous, so he never talked to him until Bucky left for war. One day when Steve tried AGAIN, to enlist he was approached by Abraham Erskine and offered him a chance. Steve went through a series of tests and he was chosen to become the Super Soldier.

After Steve was chosen he had to go to the procedure straight away. After the procedure, Steve came out beefed up all of his conditions were gone and he was smarter and stronger in every single way, Steve truly was a "Super Soldier" and he was assigned to destroy HYDRA bases and he had his own private team which were Bucky, James "Logan" Howlett Jr, Walter Richards Sr, Dum Dum Dugan and Jack Fury.

Steve spent a year killing HYDRA agents and destroying their bases. In 1945, Steve encountered Red Skull and they battle, Red Skull tells Steve of his plans to bomb America he will not let that happen so the two battle again on a bomb-loaded on a drone plane, Steve defeats him and throws him off of the drone plane, Steve then blows the drone plane up with his final grenade, Steve manages to jump off of it before it blows up and lands in the Atlantic Ocean, Steve is then put into suspended animation.

After 67-Years of being in suspended animation he was found by Nick Fury director of S.H.I.E.L.D he was then revived back in America, Nick Fury then explained that he was frozen in ice for 67 years and it is now the modern age, Nick Fury then offers Steve Rogers a place at S.H.I.E.L.D, he accepts since he now has nothing left, Steve then asked if any of his comrades are still alive and Fury tells him Walter Sr and "Logan" are the only members alive and hasn't aged a bit. The next day he meets Bruce Banner and Bruce asks if he can take a blood sample, Steve agrees and allows him to take the sample. 5 hours later he then hears that Bruce Banner has gone missing and a green creature is destroying Manhattan, Fury then assigns Black Widow and Hawkeye to join him and fight the "Hulk"

As they arrive they see Iron Man and Thor already fighting the Hulk, they all join forces and take him down, the Hulk reverts back and they see its Bruce Banner the heroes then take him in to S.H.I.E.L.D where he is put into custody.

Formation of the Avengers

A few weeks later, Nick Fury calls the heroes in and suggests they should start a peace protecting superhero team called the Avengers, they accept.

Shortly after the Avengers went public, Nick Fury suggested for publicity, Steve should make his costume less "war-y". And so S.H.I.E.L.D made Steve a new "stylish" and more heroic costume for the Avengers.

Starting a relationship with Natalia

Steve eventually confessed his feelings for Natalia and she replied "You took your time" and the two shared a passionate kiss, signifying a start of a new relationship.

One day the Triskelion was attacked by unknown superhumans claiming for the blood of their enemies. Steve suited up to battle these foes with Hulk, Natalia and Clint, while Fury contacted Iron Man and Thor. Steve came across the one known as Baron Zemo, Red Skull's son who wanted revenge for his father's death, Captain America and Natalia battled Zemo but he proved too strong having enhanced strength from his father's Super Soldier formula. Eventually after Hulk launched the Abominations corpse at Baron Zemo rendering him unconscious and long enough for Captain America to imprison him. Steve then went on to help, Iron Man defeat Crimson Dynamo although this battle was short as Iron Man and Dynamo took their battle to the skies. After hours of battling the Dark Avengers were eventually defeated and put into S.H.I.E.L.D custody.

Marrying Natalia and birth of Cody

In 2015, Steve proposed to Natasha and the two later married, in 2021 she gave birth to their son Cody Rogers who also had inherited the Super Soldier Serum.

Disbandment of the Avengers

In 2025 after the new President John Damien was elected, he outlawed all superheroic activities, thus ending the Avengers activities and leaving Steve and Natalia retired and to raise their son Cody a normal life.

In 2033, after the Super Soldier Serum in his blood became unstable, Steve died peacefully of cancer, surrounded by his fellow Avengers.

This Super Soldier Serum has metabolized and enhanced all of his bodily functions to beyond the peak of human efficiency giving superhuman abilities.

Artificially Enhanced Physiology: Captain America frequently exhibits superhuman abilities as a result of the Super-Soldier serum. He is transformed from a frail young man into a "perfect" specimen of human development and conditioning (and likely into superhuman levels). Captain America is extremely intelligent, strong, fast, agile, and durable.

Master Martial Artist: Captain America he has mastered numerous martial arts like marine combat, muay-thai, boxing, judo and jiujitsu. He engages in a daily regimen of rigorous exercises (including aerobics, weight lifting, gymnastics, and simulated combat) to keep himself in peak condition.

Weapons Proficiency: He did not usually use weapons other than his shield, but unlike his Earth-616 counterpart, in desperate times or situations where he and teammates were outnumbered, he would wield additional weapons to ensure victory. He had used staffs, bludgeons, and was adept with swords [41]. He likely received training with different kinds of weapons during his wartime for undercover infiltration missions in the event of not being able to use his shield.

Master Acrobat: Rogers' years of training have made him an expert in the field of acrobatics and gymnastics as well as a stunning aerialist.

Indomitable Will: Rogers is a very strong willed person second to none. He was able to suppress all forms of temptation including physical, mental, and sexual. It was even noted in Dr. Erskine's log that the serum's success on Rogers may be attributed to "pure intent of the subject's will".

Expert Marksman: He could throw most if not all projectile weaponry with great aim and was well versed in the use of firearms his masterful sharpshooter sniper.

Master Tactician and Strategist: Captain America is "a tactical genius". He has been widely considered one of, if not the greatest, tacticians on the planet both on and off the battlefield. He's capable of formulating sufficient victory plans in "less than a second", and his brilliant tactical sense allows him to just as quickly alter any strategy of plan to fit the needs of the situation, one example of the latter is changing his World War II crew's pre-articulated plan within thirty seconds of drop-time after observing the approaching battlefield's variables, while commenting "the [original] plan had a hole the size of Iowa". These seem to verify Nick Fury's comment that Cap "learns new skills faster than a damn computer".

Master Shield Fighter: Captain America's years of training and experience with his unique shield, as well as its physical properties, allows him to accomplish mind-boggling feats with the item. Aside from bashing foes with it and blocking incoming attacks, Cap is able to throw the shield with nearly perfect aim. He is able to hit multiple targets with the same throw by means of ricochet, and can even achieve a boomerang-like return effect with it, allowing him to strike enemies from behind or retrieve the shield without objects to ricochet from.

Captain America's strength in the handbooks 7 tons maximum which would put him at superhuman.

Equipment: Captain America's suit is made of a Vibranium breast plate and bulletproof Kevlar. He additionally carries tactical devices and other items that a particular scenario may call for in his utility belt.
Transportation: Captain America has used a specially designed M-1 Abrams Tank in the past, though it was destroyed by the Hulk.
Weapons: He used to carry round bulletproof shield made of Adamantium. The shield was great aerodynamic properties: it is able to slice through the air with minimal wind resistance and deflection of path. Its great overall resilience, combined with its natural concentric stiffness, enables it to rebound from objects with minimal loss of angular momentum. It is mostly indestructible; capable resisting penetration, temperature extremes, and all forms of energy, However it was destroyed but soon replaced with an identical looking shield, except this one was made in Asgard and was given to Rogers by Thor. He also employs firearms and various other equipment.

Retrieved from "https://marvelcomicsfanon.fandom.com/wiki/Steven_Rogers_(Earth-1315)?oldid=189417"
Community content is available under CC-BY-SA unless otherwise noted.