You have reached the cached page for https://jamaica-gleaner.com/article/news/20180107/plastic-problem-alert-over-three-million-pounds-collected-recycling-partners
Below is a snapshot of the Web page as it appeared on 1/14/2022 (the last time our crawler visited it). This is the version of the page that was used for ranking your search results. The page may have changed since we last cached it. To see what might have changed (without the highlights), go to the current page.
You searched for: 2017 year in review jamaica news We have highlighted matching words that appear in the page below.
Bing is not responsible for the content of this page.
Plastic problem alert - Over three million pounds collected by Recycling Partners since 2014 | News | Jamaica Gleaner
Skip to main content 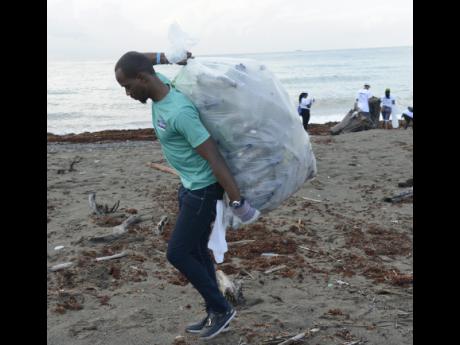 Ian Allen
A volunteer moves some of the thousands of discarded PET bottles taken from the Palisadoes beach on International Coastal Cleanup Day last year.

Recycling Partners of Jamaica (RPJ) is to expand its efforts to reduce plastic waste in Jamaica this year.

The public-private sector group aims to increase the 2018 collection of polythene terephthalate (PET) bottles and continue the fight against plastic pollution.

In Jamaica, it is estimated that 600 million PET bottles are used each year. However, according the UK-based Guardian newspaper, one million plastic bottles are bought around the world every minute and the number is forecasted to jump another 20 per cent by 2021.

"Jamaica must adopt a culture of constant recycling, which will contribute to decreasing our carbon footprint and ultimately protecting our environment," declared Francois Chalifour, vice-chairman of the board of directors at RPJ.

Headlines Delivered to Your Inbox

Sign up for The Gleaner’s morning and evening newsletters.

Though PET bottles are widely the most recycled plastic in the world, the 2020 prediction poses a serious problem.

It is believed that the surge in plastic bottle usage will outstrip worldwide recycling efforts. PET pollution severely jeopardises oceans, coastlines and other areas and needs to controlled or continuously addressed through recycling.

"Plastics like PET most likely touch your fingertips at least twice every day in soft drinks and water bottles. As its use soars across the island, efforts to collect and recycle the bottles to keep them from contributing to pollution must keep up. The year 2018 will no doubt provide more opportunities for RPJ to do just that," said Chalifour.

RPJ reports that between its inception in March 2014 and March 2017, 3.3 million pounds of plastics - or well over 100 million bottles - have been recovered from the environment in Jamaica.

The entity has recently intensified recycling efforts at consumption points through partnerships with social and entertainment events. For these events, RPJ is prepared to deploy a truck and a team to retrieve PET plastic bottles on site.

"In fulfilling our mandate to reduce plastics in our sidewalks, drains, coastlines and landfills, across the island, RPJ urges all Jamaicans to separate PET plastics," said Chalifour.

RPJ has also introduced a programme to incentivise the separation and delivery of the plastics.

Individuals are allowed to turn in bottles at RPJ's Lyndhurst Road location, where they are valued based on weight. After which, the collectors receive a numbered and signed voucher, which authorises the collection of cash at select LASCO Money locations across the island.