You have reached the cached page for https://coast.noaa.gov/states/fast-facts/hurricane-costs.html
Below is a snapshot of the Web page as it appeared on 1/20/2022 (the last time our crawler visited it). This is the version of the page that was used for ranking your search results. The page may have changed since we last cached it. To see what might have changed (without the highlights), go to the current page.
You searched for: 2017 year in review jamaica news We have highlighted matching words that appear in the page below.
Bing is not responsible for the content of this page.
Hurricane Costs

Of all recorded weather disasters in U.S. history, tropical cyclones—known as hurricanes when occurring in the North Atlantic, central North Pacific, and Eastern North Pacific Oceans—have caused the most deaths and destruction. While much of the information on this page focuses on hurricanes, some of the numbers account for total weather disasters, including flooding, severe storms, and wildfires.

The number of weather and climate disasters in the U.S. in the past three years (2018 to 2020) with losses exceeding $1 billion.

The total approximate cost of damages from weather and climate disasters in the U.S. from 1980 to 2020.

The average annual number of weather and climate disasters from 2015 to 2020. In 2020 alone, the U.S. experienced 22 billion-dollar disasters.

2020 set a new record for events, with 22 billion-dollar weather and climate disasters—shattering the previous annual record of 16 events in 2011 and 2017. 2020 was the sixth consecutive year in which 10 or more billion-dollar disaster events occurred in the U.S.

There were 13 severe storms, seven tropical cyclones, one drought, and one wildfire event in 2020, for a total cost of $95 billion. These events resulted in the deaths of 262 people.

The cumulative costs of the 16 separate billion-dollar weather events in the U.S. in 2017 was $306.2 billion, breaking the previous cost record of $214.8 billion (2005). It is estimated that Hurricane Harvey alone had total costs of $125 billion—second only to Hurricane Katrina in the period of record, which had an approximate cost of $161 billion.

The 2020 hurricane season got off to an early start, with Hurricane Hanna making landfall on Padre Island, Texas, on July 25, with sustained winds of 90 miles per hour. With the formation of Tropical Storm Wilfred on September 18, the 21-name Atlantic list was officially exhausted. For only the second time in history, the Greek alphabet was used for the remainder of the season, extending through the ninth name on the list: Iota.
Hurricane Laura: Hurricane Laura—a powerful category 4 that made landfall in southwestern Louisiana on August 27—was the most expensive weather event of the year, costing $19 billion. Winds up to 150 mph and storm surge in excess of 15 feet caused heavy damage along the coast and inland. Laura was the strongest hurricane (by maximum sustained wind speed at landfall) to hit Louisiana since the 1856 Last Island hurricane. Laura also had highest landfall wind speed to affect the U.S. since Hurricane Michael in 2018. There were additional impacts to surrounding states, including Texas, Mississippi, and Arkansas.
Six weeks later, Hurricane Delta, a category 2, made landfall in nearly the same location as Hurricane Laura, with winds of 100 miles per hour and total costs of $2.9 billion.
Hurricane Sally: Hurricane Sally was a category 2 when it made landfall in Gulf Shores, Alabama. Wind gusts up to 100 miles per hour and up to 30 inches of rainfall caused considerable flood and wind damage across Alabama, the Florida panhandle, and into Georgia. 2020 became the fourth consecutive year that the U.S. was impacted by a slow-moving tropical cyclone that produced extreme rainfall and damaging floods (Harvey, Florence, Imelda, and Sally, respectively).

2018 and 2019 each saw 14 billion-dollar weather disaster. Associated losses for 2018 were estimated at $91 billion and for 2019 were $45 billion—for a combined total of $136 billion.
Hurricane Dorian: After devastating the Bahamas (as the worst natural disaster in the country’s history) in early September 2019, Dorian made landfall on the Outer Banks of North Carolina on September 6 as a category 1 hurricane. Dorian's intensification to a category 5 storm marked the fourth consecutive year in which a maximum category 5 storm developed in the Atlantic basin—a new record. Dorian also tied the record for maximum sustained wind speed for a landfalling hurricane in the Atlantic (at 185 miles per hour), sharing the record with the historic 1935 Labor Day Hurricane.
Hurricane Florence: Florence made landfall near Wrightsville Beach, North Carolina, on September 14, 2018 and became one of the deadliest and costliest hurricanes to ever impact the Carolinas. It caused at least 51 deaths and record flooding.
Hurricane Michael: Michael made landfall near Mexico Beach, Florida on October 10, 2018, with sustained winds of 155 miles per hour. It was the most intense hurricane on record to make landfall along the Florida Panhandle, and caused at least 45 deaths—as well as widespread devastation—across the Panhandle, Georgia, the Carolinas, and Virginia.
Western Wildfires: Two wildfires impacted California in early November 2018; the Camp Fire burned more than 153,000 acres, caused at least 88 fatalities, and destroyed more than 18,000 structures in Northern California. It was the most destructive and deadliest wildfire on record in California, and the deadliest wildfire in the U.S. since 1918. In Southern California, the Woolsey Fire destroyed more than 1,500 structures and killed at least three people in and around Malibu.

The 2017 Atlantic hurricane season was among the top seven most intense ever recorded. Record-breaking statistics, in addition to costs, include the following:
Hurricane Harvey: Harvey was the most significant tropical cyclone rainfall event ever recorded in U.S. history, both in scope and peak rainfall amounts. The highest storm total rainfall report from Harvey was 60.58 inches. Prior to Hurricanes Irma and Maria, Harvey became the deadliest U.S. hurricane in terms of direct deaths since Sandy (2012) and the deadliest hurricane to hit Texas since 1919. It was the first category 4 hurricane to make landfall in Texas since 1961, and the first category 4 to make landfall in the U.S. since 2004. Harvey lasted 117 hours, beating the previous record for duration of Hurricane Fern in 1971.
Hurricane Irma: With maximum winds of 185 miles per hour, Irma became the strongest storm on record to exist in the Atlantic Ocean outside of the Caribbean and Gulf of Mexico. It sustained those maximum winds speeds for 37 hours and spent three consecutive days as a category 5 hurricane—making it the longest of any cyclone in the world since 1932 to maintain that intensity. The occurrences of Harvey and Irma—making landfall within two weeks of each other—were the first time in recorded history that two category 4 or higher hurricanes struck the U.S. mainland in the same year.
Hurricane Maria: Maria was the first category 5 hurricane ever to make landfall in Dominica, and the strongest hurricane to make landfall in Puerto Rico since 1928. It was the deadliest of 2017’s three major storm, with over 2,900 fatalities. 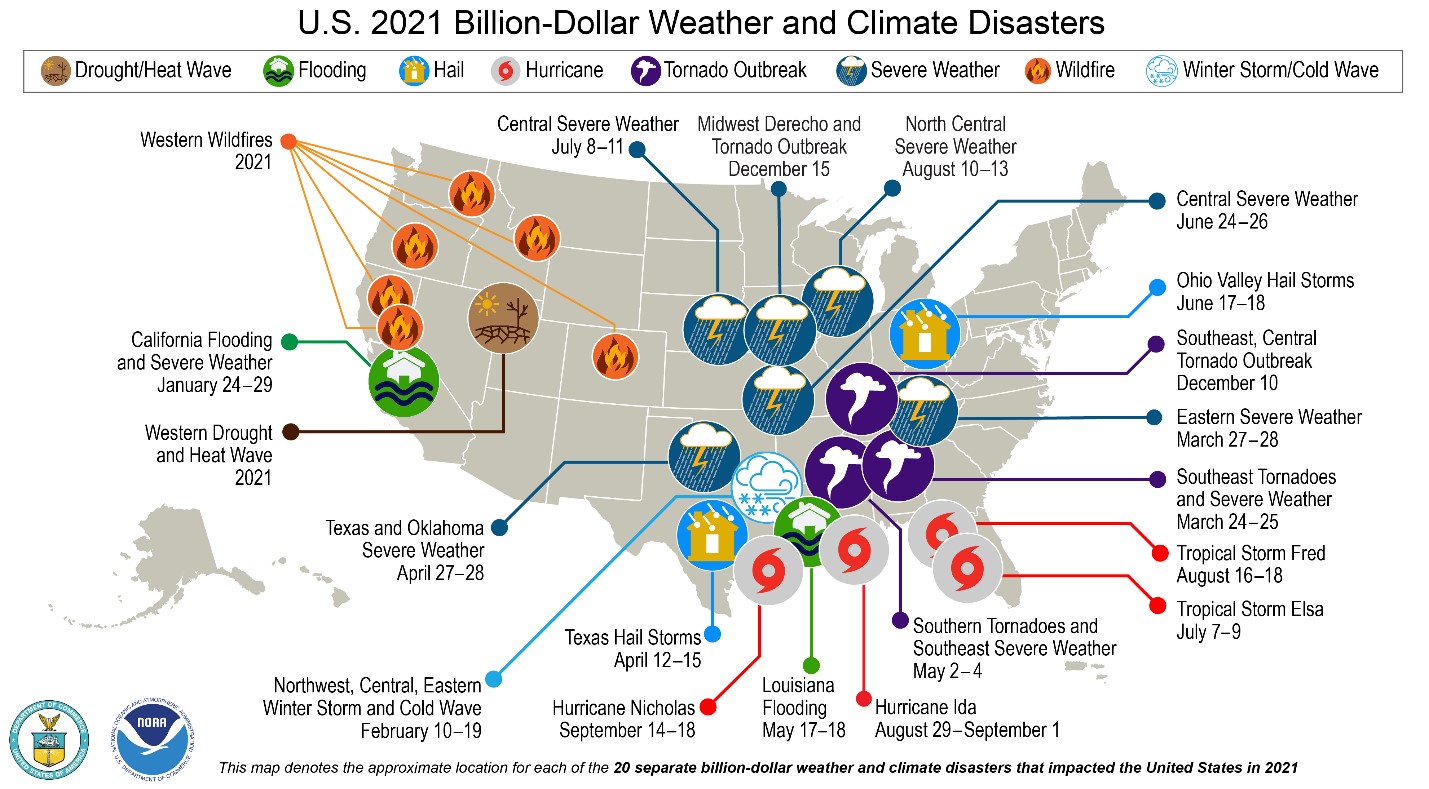