You have reached the cached page for https://www.amazon.com/Ann-Margret-1961-1966-Complete-Box/dp/B00005NNUT
Below is a snapshot of the Web page as it appeared on 1/31/2021 (the last time our crawler visited it). This is the version of the page that was used for ranking your search results. The page may have changed since we last cached it. To see what might have changed (without the highlights), go to the current page.
You searched for: 1961-1966 Ann-Margret We have highlighted matching words that appear in the page below.
Bing is not responsible for the content of this page.
Ann-Margret - Ann Margret 1961-1966 Complete Box Set - Amazon.com Music 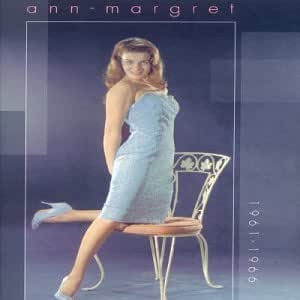 One of the Most Beloved and Attractive Singer/Actresses of all Time is Paid Tribute in this Mammoth Box Set.includes Five Digitally Remastered CDs with 133 Tracks. Also Includes an 80 Page LP Sized Book of Photos and Memorabiliaand Another 20 Page Book for the Lyrics to all the Songs. Includes Four Songs from "Viva Las Vegas" in which Shestarred with Elvis Presley.

3.8 out of 5 stars
3.8 out of 5
4 global ratings
How are ratings calculated?
To calculate the overall star rating and percentage breakdown by star, we don’t use a simple average. Instead, our system considers things like how recent a review is and if the reviewer bought the item on Amazon. It also analyzes reviews to verify trustworthiness.
Top reviews

The Arkansan
5.0 out of 5 stars A retrospective of Ann-Margret’s Talent and Beauty in one impressive box set.
Reviewed in the United States on September 5, 2018
I’m a Lucky Guy! I grab this just before Amazon sold out. Okay, I developed an Adolescent crush on Annie after seeing her in Bye Bye Birdie. Yes, and it’s still with me too.

This box set did not disappoint. The Mastered sound is Crystal clear. The high quality book is stroll down memory lane with one of the most talented, sexiest sounding and visually attractive ladies in the business. Thank you Annie for all the fun, for your service with USO and the overall pleasure of your entertainment talent.

You may have been Born in Sweden but, your an American treasure.

Someday I'll hear these previously unreleased songs and a bunch of others. Someday! Because I know they will be awesome.

The 1-star is just me being upset.
Read more
Helpful
Report abuse

Eclectic Revisited
3.0 out of 5 stars It Do Me So Good
Reviewed in the United States on February 22, 2005
I don't own this package of this sexy lady's renditions of past hits, but I have heard her sing many of them over the years. Ann-Margret's image as a sexually daring performer with a divine figure (compare to today's "boy hips" females) often overshadowed her real ability to handle a song. Once a protege of George Burns in Las Vegas, the lady did hit the charts with "You Do Me So Good" and "I Just Don't Understand". So well done. She was cast in second-rate movies in the 60s but did make a splash in Elvis Presley's "Viva Las Vegas". She also had success with her shows in that city. The lady has lived a good life but deserved better than the movie roles she was handed. Only her "character actor" roles have shown how well she can act. As for the music, the songs are mostly 1950s standards and sound dated. No longer a youngster, Ann-Margret can probably still sing a good tune. I'd pay to see her perform, but before I'd pay the listed price for this compilation, I'd want a hug from this sweetheart of a woman. A guy can dream.
Read more
2 people found this helpful
Helpful
Report abuse
See all reviews