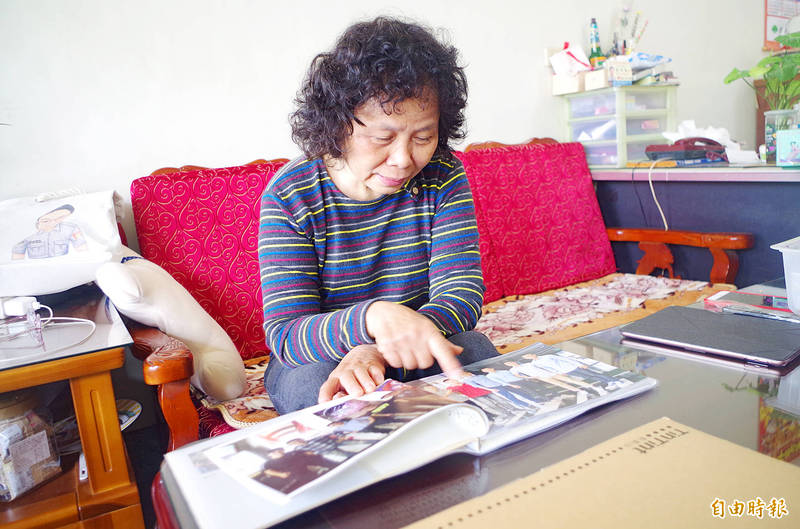 Chang Hsiu-chen, mother of murdered railway police officer Lee Cheng-han, points at a photo album in Chiayi yesterday after the High Court convicted her son’s killer of homicide and sentenced him to 17 years in prison. Photo: Wang Shan-yen, Taipei Times

OVERTURNED: A lower court’s ruling in April last year acquitting the man because of his mental health issues sparked a public outcry at the time

The court sentenced the man, surnamed Cheng （鄭）, to 17 years in prison, after which he must undergo five years of custodial protection to monitor and treat his mental health issues.

Upon learning of the ruling, the mother of slain Railway Police Bureau officer Lee Cheng-han （李承翰） said: “With some reluctance, I can accept this decision.”

“I think the sentencing can help to make our society safer,” she said. “By the time that Cheng finishes his prison sentence, I hope that he will never again endanger the public.”

“It conforms more to society’s expectations,” Minister of Transportation and Communications Lin Chia-lung （林佳龍） said of the ruling.

Cheng, 55, was found guilty of homicide and of using violence against a public official on duty.

A psychiatric evaluation had found that Cheng had mental disorders, impaired judgement and diminished capacity, but that he still had enough control over his actions to be held responsible.

“The panel of judges concluded to overturn the earlier acquittal decision, since it was based on an erroneous interpretation of Cheng’s mental condition from the psychiatric evaluation,” presiding judge Chen Lien-fa （陳連發） said.

“We also believe that if Cheng does not receive appropriate treatment, he is likely to pose a danger to society when released from prison, and could cause bodily harm and threaten people’s lives, so we have imposed five years of custodial protection following his release to monitor and treat his mental condition,” Chen added.

Yesterday’s ruling was the second in the case. The defendant and the prosecution can appeal.

Lee, 25, was killed in the line of duty on July 3, 2019, after being stabbed by Cheng, who did not have a ticket and refused to pay for his fare on a northbound express train.

Cheng’s actions were captured on video by other passengers.

Many people hailed Lee as a hero who acted with courage to protect the train’s passengers. A plaque was later put up at the station to commemorate his heroism.

On April 30 last year, when the Chiayi District Court acquitted Cheng of murder based on the psychiatric evaluation, there was a public outcry.

Lee’s father told reporters after the Chiayi court’s verdict was announced: “This is outrageous.”

“My son was killed in the line of duty as a police officer and the court gave a not-guilty ruling,” he said. “It is painful for me right now. The judges have lost their senses and reason.”

The father died one month after the first ruling from a stomach hemorrhage.

Lee’s mother said that it was her wish that her husband could have been there to hear yesterday’s decision, “because he very much cared about the outcome of the case and some justice has been restored.”