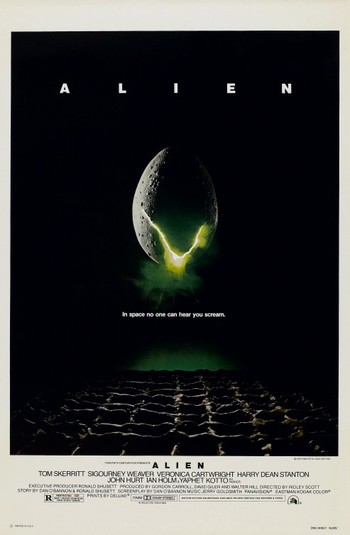 In the year 2122, the crew of the commercial freighter spaceship Nostromo sidelines their trip back home to Earth when they pick up a Distress Call from an uncharted moon. While searching for the source of the signal on the moon, one of the crew members gets an alien organism attached to his face and falls into a coma. The next day, an alien embryo explodes from the crewman's chest — and rapidly matures into a savage monster. As the alien stalks through the ship, the crew desperately tries to find a way to fight back.

Screenwriter Dan O'Bannon based the film on a Black Comedy sequence from his previous film Dark Star, in which a beachball-shaped alien runs amok on a spaceship and tries to push an astronaut down an elevator shaft. O'Bannon and Ronald Shusett drafted a script called Star Beast — later changed to Alien — and sold it to Brandywine Productions, who had a distribution deal with 20th Century Fox. H. R. Giger designed the Alien, among other elements of the film; his sexualized biomechanical style influences science fiction movies to this day.

Ripley: Final report of the commercial starship Nostromo, third officer reporting. The other members of the crew -- Kane, Lambert, Parker, Brett, Ash and Captain Dallas -- are dead. Cargo and ship destroyed. I should reach the frontier in about six weeks. With a little luck, the network will pick me up. This is Ripley, last survivor of the Nostromo, signing off.
[to Jonesy the cat]
Ripley: Come on, cat.