You have reached the cached page for https://comingintheclouds.org/about-catholic/catholic-doctrine/the-roman-catholic-church-a-gigantic-fraud/
Below is a snapshot of the Web page as it appeared on 1/16/2022 (the last time our crawler visited it). This is the version of the page that was used for ranking your search results. The page may have changed since we last cached it. To see what might have changed (without the highlights), go to the current page.
You searched for: +why is the roman catholic church called the latin church of the world map We have highlighted matching words that appear in the page below.
Bing is not responsible for the content of this page.
The Roman Catholic Church - A Gigantic Fraud - Coming In The Clouds 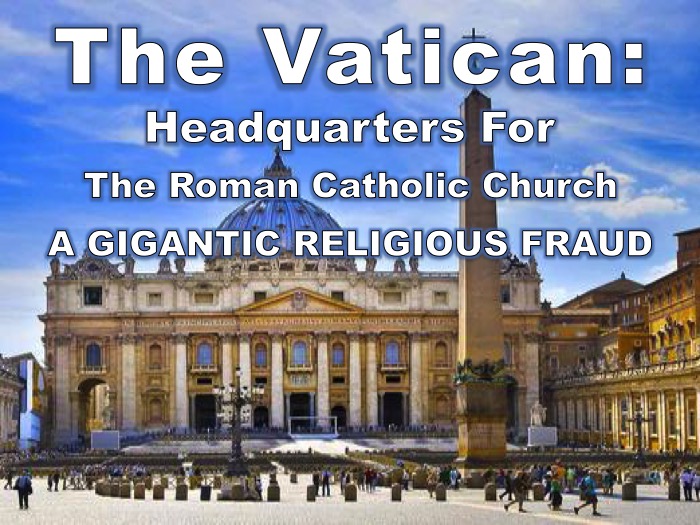 The Catholic Church has boasted for centuries that it is the “one true Christian Church” and nothing could be further from the truth. They claim they can trace their lineage all the way back to the apostle Peter of the first century, whom they falsely claim was the first Pope or in other words, the first bishop of Rome. However they neglect to tell their followers that Peter never was in Rome so how could they say that he was the first bishop of Rome? I was born and raised a Roman Catholic and never realized how much I had been deceived by that totally counterfeit-Christian religious institution. At around age 30, God got my attention and I became “born again”. And it was at that time, that I started listening to Protestant bible preachers and teachers who were not afraid to expose the false teachings of the wicked church of Rome, even though exposing that large and powerful church is deemed extremely “politically incorrect” in most Protestant churches of our present day. When you have as much power as the Vatican has you can write your own history books and create your own narrative. What this church really is, is simply this: 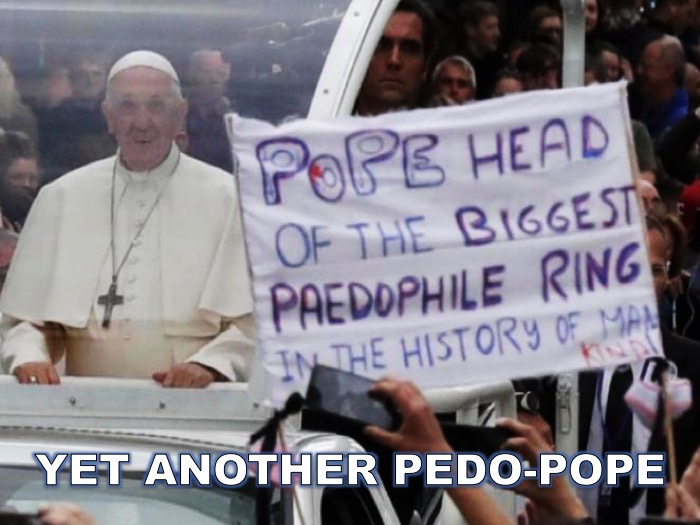 As you will see below, the Catholic Church (also known as the Church of Rome) has been “invented” by men. It is not the true Christian Church instituted by the Lord Jesus Christ and his apostles. And many of these Catholic inventions are contrary to the teachings in the Holy Bible, including contrary to Catholic versions of the Bible. How has this religious institution gotten away with such a gigantic fraud for so many years? By indoctrinating her followers at an early, impressionable age and by threatening dissidents with excommunication and death.

So what are some obvious signs that the Catholic Church is a false Christian church? For one thing, the statue of Saint Peter in the Basilica in Rome had originally been a statue of the god Jupiter. The obelisk in the Vatican courtyard, that looks like the Washington Monument, is a well recognized pagan fertility symbol brought in centuries ago from some pagan temple. The idea of the Mary goddess (i.e. the Catholic teaching that Mary is the queen of heaven) was borrowed from various pagan religions that had a mother-child goddess such as Isis and Osiris in Egypt and Ishtar and Tammuz in Babylon.

A.D. 431—Beginning of exaltation of Mary, term “Mother of God” first applied to her by Council of Ephesus

A.D. 593—The doctrine of Purgatory by Gregory I

A.D. 750—Temporal power of Popes, conferred by Pepin, King of the Franks

A.D. 850—Holy water, mixed with pinch of salt, chrism, and blessed by a priest

11th century — The Mass developed gradually as a sacrifice, attendance made obligatory

A.D. 1184—The Inquisition instituted by Council of Verona

A.D. 1215—Auricular confession (Rite of reconciliation) of sins to a priest instead of God, instituted by Innocent IIIA.D. 1220—Adoration of the Host (wafer), decreed by Pope Honorius III

A.D. 1414—The cup forbidden to the laity at communion by Council of Constance

A.D. 1439—Purgatory proclaimed as a dogma by the Council of Florence

A.D. 1545—Tradition declared of equal authority with the Bible by the council of Trent

A.D. 1546—Apocryphal books added to the Bible by the Council of Trent

A.D. 1560—Creed of Pope Pius IV imposed as the official creed in place of the original Apostolic Creed.

A.D. 1864—Syllabus of Errors proclaimed by Pope Pius IX and ratified by the Vatican Council, condemned freedom of religion, conscience, speech, press, and scientific discoveries which are disapproved by the Roman Church; asserted the Pope’s temporal authority over all civil rulers

A.D. 1870—Infallibility of the Pope in matters of faith and morals proclaimed by the Vatican Council

“Religious Traditions Invented The Catholic Church” are based on a list from Loraine Boettner’s excellent book, “Roman Catholicism,” pages 7 & 8.

A famous Catholic Cardinal himself admitted that: “temples, incense, oil lamps, votive offerings, holy water, holidays and seasons of devotion, processions, blessings of fields, sacerdotal vestments, the tonsure (of priests and monks and nuns), and images…are all of pagan origin” (“The Development of Christian Religion,” John Henry Cardinal Newman, p.359). Yet, Jesus said that if we practice these traditions we make void the Word of God (in Matthew 15:6) and that by doing so, we are worshiping God in vain (Matthew 15:9). Also, in the second epistle of John we read: “Whosoever transgresseth, and abideth not in the doctrine of Christ, hath not God. He that abideth in the doctrine of Christ, he hath both the Father and the Son. If there come any unto you, and bring not this doctrine, receive him not into your house, neither bid him God speed” 2John 9&10.

I wish to encourage any Catholics who read this article to search the Bible diligently (preferably the King James Version) to see if the Catholic church and its clergy are telling the truth or not. Our eternal souls are at stake. Do you really want to trust your eternity to a priest or a pope instead of to the Lord Jesus Christ whose words are recorded for your benefit in the pages of the Bible?

This information is shared in a spirit of true Christian love, hoping that you will want to seek the truth about God and salvation. Spiritual truth is immensely important to all of us personally, whether we realize it or not. Jesus made that clear to us when he told his executioner Pontius Pilate, the following:

“To this end was I born, and for this cause came I into the world, that I should bear witness unto the truth. Every one that is of the truth heareth my voice.” John 18:37

Christ Died For The Ungodly

The divine testimony concerning man is, that he is a sinner. God bears witness against him, not for him; and testifies that "there is none righteous, no, not one"; that there is "none that doeth good"; none "that understandeth"; none that even seeks after God, and, still more, none that loves Him (Psa. 14:1-3; Rom. 3:10-12). God speaks of man kindly, but severely; as one yearning over a lost child, yet as one who will make no terms with sin, and will "by no means clear the guilty." <continued>

Is Arminianism The Gospel?

How To Worship God